Billie Eilish — Happier Than Ever

by Josh Herring 2 months ago in album reviews

An analysis of the artist’s sophomore album 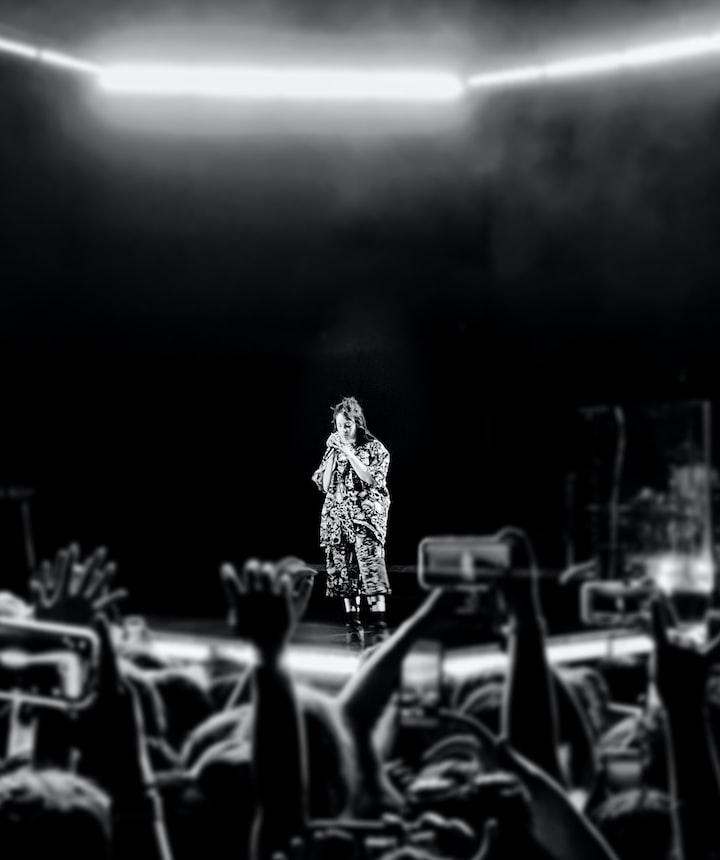 Photo by Nathan DeFiesta on Unsplash

I’m going to be honest from the very beginning, when I listened to this album for the first time, I did not like it. I was actually quite disappointed. Then I heard it a second time, then a third time. Fortunately, this album has quickly grown as me. I’ve seen it rated as low as a 6 on The Line Of Best Fit and as high as a perfect 10 on some music review pages on Instagram. I was conflicted at first because it wasn’t the high flying vocal performance you might expect with the title Happier Than Ever. However, I’ve come to understand and appreciate the genre-bending performance Eilish has provided.

Eilish doesn’t deviate too far from her norm of subtle, low, and dark style of music in this album. You could argue she gets quieter and quieter until the magnum opus in the titular track. However, we must traverse through the depths of Billie’s psyche to understand her final boutade. Happier Than Ever is the emphasis and enlightenment of emotional fortitude, intelligence, and maturity.

Opening with “Getting Older”, Eilish discovers the annoyances and perils of growing older both physically and mentally. The resulting clarity of gaining wisdom, at times, can be revolting as we begin to understand the turmoil that is life. She discovers that what she used to enjoy is now used as means of survival, her music keeps her employed. Once doing what you love turns from a hobby to a living, you immediately lose the “escape” factor that the hobby provided. You can see this in other stars such as Ninja, who has recently taken flak for “falling off” with decreased streaming numbers and a questionable appearance. Regardless, having learned the aforementioned is better than not and trudging through turmoil.

Exploring emotional maturity, Eilish uses a trippy, electronic track in “I Didn’t Change My Number” to flaunt in the face of former acquaintances. She has essentially moved on and exhibits confidence in this move by not changing her number and instead ignoring this person. This is the beginning of the journey of emotional introspection.

Skipping ahead to a fan favorite in “Oxytocin”, the interpretation of this song is up in the air. It could either be describing a toxically addicting sexual relationship or the relationship between Billie and her abuser. The artist describes the song as, “purposely insane [to perform] live” yet she was copulating with, “crazy feelings” that you’d be able to understand if you read and listen to the lyrics. While the song is definitely upbeat, fun, and hard-hitting, this could be purposely misleading. Many songs take advantage of upbeat tempos to explore melancholic topics. However, this is up to the listener. I personally lean towards the abuser situation, you have to look closely. The key lyric lies in the last chorus:

You and me are both the same

You should really run away

Released with a risqué music video, “Lost Cause” was the topic of much debate when it was released. The video jump started the accusation of queer baiting which sparked the interest of what I like to call the “Cancel Council”, thereby leading to calls to cancel Billie after a video surfaced of the artist using a slur. Those thoughts aside, the song recalls a relationship Eilish deems a lost cause, meaning no longer redeemable. The relationship has lost the luster it once had, it has no chance to recuperate. This song is the continuation of emotional fortitude as it takes a stronger will to recognize the inevitable end of a relationship, especially one that you were particularly fond of.

While not a song, “Not My Responsibility” is an important addition to the album. It is spoken selection that travels through the uncomfortable topics of body shaming and the extreme sexualization of women. The artist has been criticized for wearing baggy clothes because of how women are sexualized. Regardless, no matter how she dresses or how she portrays herself, there will always be a predacious response. As a result, Eilish finds comfort in expressing herself however she pleases. Ultimately, regardless of how she dresses and expresses herself, it isn’t her responsibility to cater to the desires of a patriarchal society.

Being one of the more relatable songs on the album, “Your Power” dives into the impact of abusive relationships. Power in an abusive relationship stems from physical and emotional domination, which usually results in the victim feeling stuck or unable to leave. This often leads to the victim blaming themselves for any wrong-doing, as Billie herself has explained in her 2019 track “WHEN I WAS OLDER”. However, without this power, the “relationship” crumbles. The sad nuance behind the song is that it is relatively vague yet relatable for so many people.

Next is the song the entire album has built up to — “Happier Than Ever”. This is far and away the best song, in my opinion. It can be separated into two sections; the first being the classic slow, somber Billie we’re used to and the second being a surprising and new punk pop fusion that reels the listener back in. Accompanied by a visually striking music video (above), we really see Billie let loose in a therapeutic, cathartic release of emotion and anger. The first half of the song serves as a a reminder of the emotional toil of her former relationship and when she finally got away, she is happier than ever. The latter half is dedicated to the realization that her self-worth isn’t validated in this relationship and a general trash-talking of the abusive ex. I believe the album could’ve ended here on the highest note. However, there is one last song, “Male Fantasy” which highlights a the difference between real and fake love.

In her Lyric Mode album, in which the artist explains the nuance to each song, Eilish stated that Happier Than Ever was going to be the last song but she didn’t want to leave the album on an angry or sour note. “Male Fantasy” is sad and calm and served as coming down type of closer. There could be a whole thesis on the male fantasy; however, I will try to condense it quickly. The notion of love and relationships in media is largely portrayed from a man’s perspective, which often is a fantastical, and often hyper-sexual, expression that opposes the real world view. Continually appealing to this trope feeds into the male fantasy and it can be seen anywhere from ads (Go Daddy commercials) to TV to even video games (any game where women wear obscene “armor”). The song juxtaposes the “love” the artist sees in pornography (appealing to the male fantasy) to the real love she has experienced and can’t let go of (a love that houses her fantasy).

Is Billie really happier than ever? Maybe. Is she better off than she was 2 years ago? Definitely. This album showcased emotional maturity above all and introduced us to a wiser artist than before. Paving the way and creating her own genre (rather than sticking to status quo), Eilish tackles the uncomfortable and spares no detail with Happier Than Ever.

Receive stories by Josh Herring in your feed
Josh Herring
Read next: Everything You Should Know Before Getting Your First Piano