An Ode to The Ballad That Supersedes Everything In My Life: "Dear Baby Yoda"

by Ghezal Amiri 28 days ago in pop culture

How I found My Jam and why a certain line involving Tatooine's twin suns deserve all the praise in the galaxy.

SPOILER ALERT for The Mandalorian and Avengers: End Game.

I am unabashedly in love with Baby Yoda from Disney+'s juggernaut series The Mandalorian. I am unhealthily obsessed.

Referred to as "the Child" from those at Disney, is Baby Yoda most likely a ploy used by the Disney corporation to sell all the merchandise? Absolutely. Will I be spending every dollar I earn doing unspeakable things to satisfy my obsession with the long-eared beauty? See answer above.

My entire photo gallery consists of numerous screenshots of Baby Yoda's flawless facial configuration, I'm pretty certain my friends are going to block me from all social media platforms as I send them my favourite meme of the moment on a consistent basis and I feel a legitimate shudder of pain in my heart whenever I think about his little jacket that must have been tailored by a Galactic Seamstress to fit his dainty body structure.

Day out with dad [Credit: Disney]

"Dear Baby Yoda, What to Say to You?"

Now I don't think it's an exaggeration to say Baby Yoda Pandemonium occurred almost immediately following the last few moments of Episode 1 when Mando/viewers first came in contact with him. As the series progressed it reached a point in our culture where people who had no idea what a Mando-whatian was became destined to encounter at least one person who shared a Baby Yoda meme whether they asked for it or not. 10 times out of 10 they definitely didn't ask for it.

By the time the fourth episode released, the Yoda Fever went into overdrive. This episode entitled "Sanctuary" featured a scene wherein Baby Yoda kept fiddling around with a switch Mando needed on which ultimately birthed two new meme sensations including adjusting the tunes on the radio and broth sipping... Baby Yoda took that Broth Bowl and used it to knock out Kermit The Frog's Tea Cup from his cold, green hands. I mention this episode because it's my favourite of the first season and following my watch I was left trying to accurately express my adoration I felt for this creature.

Just as I was checking out Baby Yoda listening to "Get Low" for the quadrillionth time, I somehow stumbled upon a video from The Ringer which came along and placed all the thoughts I had (and then some) in an easily digestible 3-minute heartbreaking ballad.

Watch the video below:

Musical duo Ice2Ice took the instrumental from "Dear Theodosia" which is featured in the smash Broadway hit Hamilton and injected the track with the devotion this duo possesses for the unnamed Child.

Every component that went into this disgustingly moving track is executed fantastically. The image they used for the cover - that silhouette of Baby Yodes standing in for the "A" in "Baby", the domineering presence of him with those huge buggy eyes mesmerized at the distance ahead of him - I knew I was in for a treat before I even pressed play. I had no idea, however, of just how powerful the impact would be on me.

As the piano keys hit and crooning voice of Isaac K Lee began, a wave of euphoria suddenly washed over me.

My heart did break when he came across the screen and cooed. I too dedicate every meme to him. I also have a projected image of him that I occasionally gawk at/gently caress as my friend walks past me in utter disbelief! However this track is not only executed through a wistful fantastical lens... There are real stakes occurring in The Mandalorian that is reflected in the bridge as we're left realizing that there are hunters tracking his location and he is not fully safe. Mando will indeed do all in his power to make it safe for him but... For how long? How long can this lowly outlaw brave the intricacies of interplanetary disputes vying for possession of this bewitching package?

Isaac's partner Jason Gallagher thankfully chimes in at the perfect moment before it gets too real for me with a declaration that when the 50-year-old youngling sips broth, he's undone. He commands you to take a look at his adorable son as he switches out his image for a close up of the Yodester which I cannot possibly condone more as I have no idea where I left my parents' wedding photo because, I'm sorry, Baby Yoda will always take precedence over familial obligations. I'm sure it'll show up soon...

Jason states what is tantamount to treason, then, when he declares the absolute best line related to Star Wars I have ever heard in my life: 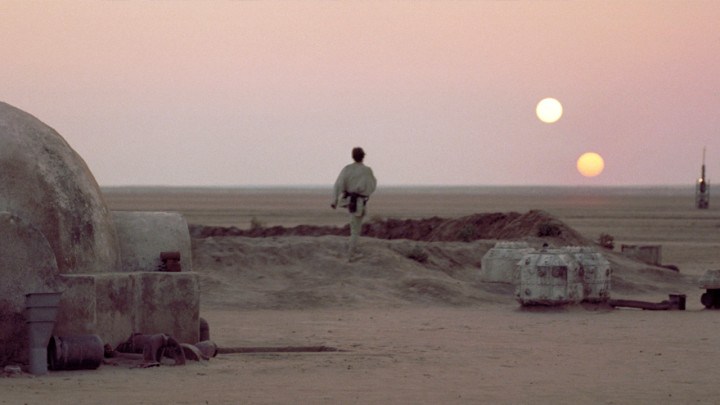 When one thinks of an iconic Star Wars-related moment, their mind most likely thinks back to a young Luke Skywalker looking over Tatooine's twin suns as the "Binary Sunset" crescendos around him. A sun is hot and scintillating. To encapsulate your love for an entity by stating it not only is bright enough to outshine one fireball in the sky but two? Is a human being even capable of experiencing that incalculable level of affection? I'm certain if you ask a parent that of their child they will say "absolutely. My affection for my offspring is that impressive." Wow, what a feeling.

As the ballad arrives at its climax, both performers stand back-to-back listing out what promises they (and us) will make in order to ensure the Baby's safety in the upcoming season as images of his curious beady eyes and gross tiny Force hand fades onto the screen. We'll do whatever it takes. Only tweet out his face. Even go so far as to pay $7/month for him which is a reference to how much Disney+ costs in the United States. Here in Canada we dish out $8.99/month so hooray for the exchanges rates...

The song concludes with the moment Baby Yoda is standing, but looks like he's sitting because he's so small, as he rides away from the town that accepted him for who he was. Frog-consuming and all. As his eyes blink, ears move and head tilts, tears are streaming down my face and I pray to all the Disney Gods that he'll blow us all away. Someday... Someday.

I never really considered myself to be an emotional mess of a person until I watched The Mandalorian and felt this amazingly strange connection with this little critter. Upon reflection, I'm certain many Readers notice this as I do: when the empathetic part of you switches into maximum overdrive when you encounter an individual who does not have the ability to voice their concerns in defending themselves... If that makes sense. I felt absolutely nothing emotion-wise when Tony Stark sacrificed himself at the end of End Game but I can rarely make it through Bambi or Dumbo without demolishing at least one box of tissues.

I truly think, particularly toward those beginning episodes when we were slightly aware of the powers Baby Yoda possessed but he was in no way prepared to tackle a fleet of bounty hunters/Werner Herzog's baddies, that his inability in being able to express himself verbally just wrecked me. There are bad people in the world and always will be, a majority of these individuals choose to prey on those incapable of self-defense because they wouldn't dare stand up to someone on their own level be it physical or otherwise. Could Baby Yoda smash fools if he wanted to? I'm sure he could. Would I prefer for him to live out peacefully on a farm somewhere and, if he chooses to, agree to have whatever tests galactic scientists need to conduct in order to understand his Force healing powers? If that's what little green guy wants, it's what he should get.

Now if you'll excuse me I'm going to read another article on the "47 Theories About Baby Yoda That May Happen in Season 2. You Won't Believe #12!" Yes... I won't believe.

Toronto-based writer who enjoys witty quips, proper grammar, Armie Hammer and Dr. Pepper. I tweet with @MrsBananaPhone because it's the best and beats the rest.

See all posts by Ghezal Amiri →