by Arlo Hennings 28 days ago in 60s music
Report Story 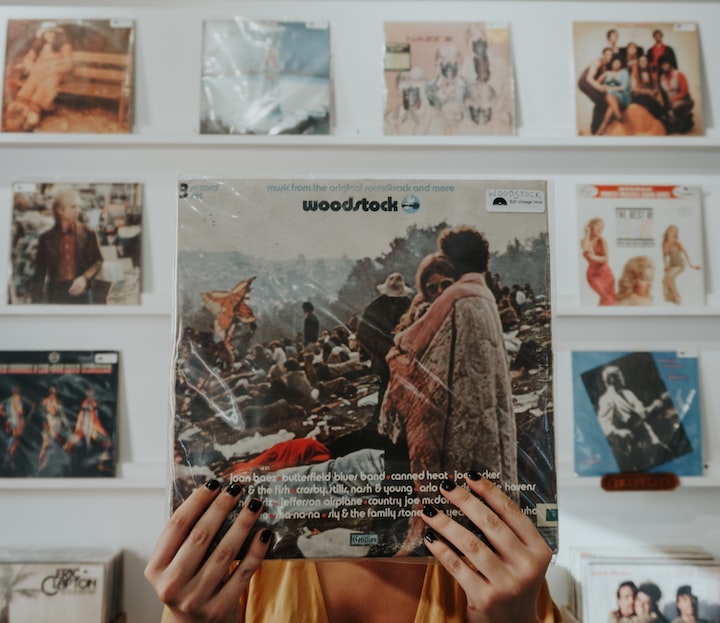 People carried tents, backpacks, coolers, blankets, children, and pets. They pulled wagons. And anything else that could be handy for camping or creating a new civilization. No one was selling tickets. The entrance gates had been torn down. It was free.

Woodstock became an overnight experiment in communal living. Rising in organic chaos from the edges of a music stage.

The great cosmic switch that controlled time was in the off position.

I slept the first night in a stranger's car. By the second day, there was no place to go to the bathroom. Anyone with food gave it away. Hundreds of thousands were too stoned to argue or complain. It was a human anthill. Filled with sweaty. Naked, freak out, love-filled, groovy-vibe, dancing people - bored or wrecked, but always dancing.

The medical MASH tent was inundated with drug-related cases. Women having babies. Broken ankles, dehydration, and all the pandemonium associated with a disaster.

Helicopter crews tried to keep up with the supplies. It was up to each individual to help share what they could for the survival of the tribe. If it wasn't for the rain that washed away the stink and provided a little drinking water, it would have been a full-fledged wipeout.

Some even welcomed the mud. Large groups turned the mud into a playground. Wore mud hats, and walked about nude like ancient tree worshippers.

I kept making my way through the sea of mud and people to get closer to my ultimate destination… the stage.

Depending on where you stood, the stage looked like a tiny pebble surrounded by a sea of ants. If you crawled in up close crushed by the crowd. Day and night the music played nonstop, like a soundtrack to the improvised nature of the setting.

I'd hung back long enough and was ready to make my big move. It wasn't difficult to slip past the overwhelmed backstage crew. Dream pass in hand I walked across the wooden footbridge to build a fort beneath the stage. I sat out of the way. No one cared that a mud-clad, 15-year-old was trying to build his vision of working in the music business.

Finding a spot to dance

Before my wide eyes. One legend after another performed. Pete Townshend, Joan Baez, Hendrix, Carlos Santana, and even Arlo Guthrie. Most were complaining about their start times. The conditions, like rain, mic levels, money, and gear hassles. I didn't care.

All I cared about was the guitars.

With each artist came a rack of the most amazing electric and acoustic guitars I had ever seen. I recognized the standard Fenders and Gibson guitars. But the rock gods had custom-built guitars - exotic, handmade gems with pearl inlays. Unique pick-ups, and golden tuning keys. I sat there mesmerized and watched them tune and warm-up.

Pete Townsend gave his guitar a few windmills on his cherry red Gibson SG. Arlo Guthrie picked, listening for any anomalies in his fretboard. I sat mesmerized and watched them tune their guitars.

If one guitar wasn't perfect their private guitar tech would appear with another. I studied their faces before they went on before 400,000 people. I noted if they were calm or nervous. Anxious or jumpy - or whether they seemed cool or dry mouth - and were they stoned or were they straight.

I sat in reserved observance. Completely engulfed in a moment of sweet surrender. Floating in my boat of bliss, awaiting with bated breath the chance to meet Jimi Hendrix.

Hendrix was scheduled to appear at midnight on the closing night but insisted on being the last to play. Then due to many delays, he finally hit the stage at 8 a.m. the next morning. After staying awake all night. I finally saw him enter the area in his red headband and white, buckskin-fringed shirt. His famous white Fender Stratocaster guitar hung over his shoulder. Some of the crew believed that he was a god that talked through a guitar.

From my vantage point, at the security fence barrier. I could see Hendrix close up, towering above the crowd, glowing in stardust.

I had seen Hendrix a total of three times.

The most recent was two months ago at the tear-gassed Denver Pop Festival (June 1969). The first time was in Minneapolis in 1968.

The show that day featured a new line-up of players. The band was introduced as Gypsy Sun & Rainbows. I was unaware that I had seen the original Hendrix Experience group for the last time. I overheard that the show today was a debut for Hendrix's new band. This new information added another layer of excitement for my hungry ears.

Hendrix was the most mystical of all the performers. He wasn't a musician - he was a shaman that brought his visions to the tribe through his lightning rod. When he stepped out there and plugged in. The air pushed back three feet. The sheer thunder blasted from his six-foot-high wall of amplifiers. Like cosmic bookends to the 1960s.

From the Monterey Pop Festival to closing the cultural journey at Woodstock. He called his guitar a kinky machine that kissed the skies - and that was not an exaggeration. The molded piece of white-painted wood and wire screamed. Like a mother during labor. Gave birth to the most amazing melodies I'd ever experienced, one after the other.

For the next two hours, I stared dumbfounded at what I had never heard a guitar do. The guitar played me. Cut me to the core. To the innermost reaches of my emotional hideouts - enraptured within his hypnotical rhythms.

I found myself floating somewhere beyond the innermost reaches of my emotional hideouts. On this third stone from the stone. He invited us all to board his ship- and so I did, at the right of the helm, mind you- underneath the stage. My body shook to the sometimes distorted over-the-top innovative tunes of brilliance.

I rode upon a multiversal purple seahorse through notes of stoned freedom. My world was definitely rocked and I was forever changed. "Thanks, Jimi." The moment chiseled upon my skull. I would pick up a guitar and nothing was the same.

Woodstock had shown me more than any other event of the time. The possibilities of bringing people together through music.

Hunter Thompson said, "Woodstock was the most overrated cultural event of the 20th Century." I'm not going to argue his quote. But, Woodstock became one of the most memorable groundbreaking moments in musical history ever recorded. Within a magical medley of music and mud, at the first-ever Woodstock celebration.

The "ECO" movement was a couple of years off.

One cultural experiment had risen and crashed. I looked at my torn Woodstock poster for the last time and pondered what would become of the Aquarians? The light they carried. What to become of such power? The awareness? Did it change anything?

I made my way back to the interstate and let out the wild thumb. Thumb against the blade of a pocketknife. Thumb as shiny fingernail of reflected camel eye. Thumb as a safety-pin-sized, out-of-tune fiddle, plucking a cricket's song.

Creating interpersonal harmony through music stuck with me and became a lifelong ambition. The Age of Aquarius had begun.

I'm glad I got to experience part of its meaning.

More stories from Arlo Hennings and writers in Beat and other communities.