by Cole Connor 5 months ago in humanity
Report Story

Confusion, Anger & Price Gouging — How Do We Fix It? 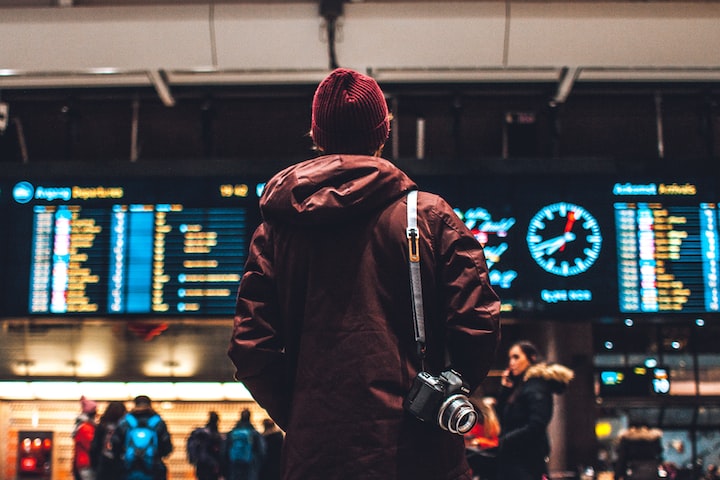 Photo by Erik Odiin on Unsplash

Let’s just start this with I hate traveling by plane. Or at least the way that I currently do it. Ya know, main cabin, zone 4 life. Squished & uncomfortable.

There are people running around. Yelling. Stressed. As an introvert, it’s an anxiety-ridden hell-hole that I regret entering until I’m safely at my destination.

Over the holidays, I had by far my worst experience.

I try not to concern myself too much with paying attention to whatever hoo blah the media stirs up next, but I must admit I was watching the news a few days before my flight hoping nothing would keep my girlfriend and me from getting home.

You ever walk into a place and the energy just feels off? Yes, me too.

We had a cheap flight per usual, and as we made our way through all of the gates we eventually got to our gate at the very end. It was WAY too crowded. Especially with all of the COVID running around.

So we decide to sit a few gates back where we could breathe in peace. As we get close to time to board, we encounter not one but two delays.

Annoying, yes. But not the end of the world, we just sat in boredom for an additional hour and a half. No worries.

While we were boarding, I noticed this man who kept telling the same story over and over to anyone who would listen.

He had a flight for yesterday, but right before he boarded, it was CANCELED. He had to get a hotel and book the current flight we were all waiting for while his luggage spent the night in LAX mere thousands of miles away.

Ah, now was Zone 4. Time to board. Every plane I board is like the beginning of Snakes On A Plane or Final Destination so I’m always a little spooked. But I’m telling you, the good vibes were not there

I sat near an exit window so the flight attendant approached to give her spiel. Before she could get started, the dude-man in front of me had his mask down so she asks politely for him to cover his whole face. He rolls his eyes and does as she asks. She looks directly at him and says,

“Are we going to have a problem sir?

Then, she grabs his boarding pass and stomps away. When she comes back, she asks everyone if they consent to the responsibilities of opening the window if we crash. She eyes the troublemaker. Everyone says “yes.” He says, “ mhm.” She says, “ Sir, I need a verbal response.” He says, “mhm.”

She asks again, and he loudly and annoyingly says, “YES”.

I’m people watching to the core when the loudspeakers come on.

“I’m sorry to inform you that due to personnel and operations issues this flight has been canceled.”

A surge of “ughs” hit my ears as I saw everyone in front of me stand up ferociously. Bags slinging out of the bins and angry faces surrounded me as I looked at my girlfriend

I don’t get outwardly angry in these situations because there’s not much I can do here. We both quickly resigned ourselves to the reality that our plans were changed, and we needed to figure something else out.

Departing from the plane, I entered into a cloud of confusion and anger. We were asked to go to the ticket counter for rebooking and baggage claim to grab our luggage. No one knew what the ticket counter was so we all stood by the gate while one of the employees had a mini-meltdown.

All I really heard was “Oh, if you think you could do my job better than me, then let’s go!!"

We were then instructed that the ticket counter was near baggage claim so we stampeded through the gates with hopes of rebooking the same night.

When we arrived at the ticket counter, there was a rebook line and a refund line. What rebooking actually meant was not explained to us so that left some people very confused. Like the couple ahead of us, who spent 10 minutes explaining how they didn’t know that getting a refund would mean that Spirit would not pay for their hotel.

The line for both quickly got very long. I saw all shapes and sizes. From single people to families with multiple kids.

My girlfriend immediately started looking to book another flight with a different airline to ensure this didn’t happen again. When looking at the prices, they had more than doubled. And even while we were standing in line, the price rose. It felt like legitimate price gouging. I am a believer in capitalism, but it felt like something was off with the prices being so high.

I saw the same man who had already had one flight canceled walk away in disgust when they told him that they wouldn’t be able to pay for this hotel two days in a row.

By the time, we got to the front of the refund line, the airline employee rushed towards us a little aggressively to make sure we were SURE we wanted a refund.

She looked so stressed. Not that I was considering it, but her job looked like way too stressful of a job for me. Some employees handled it well. Some didn’t.

We ended up getting a full refund and luckily we were quick enough to rebook a flight for the next day…at triple the price. We had family nearby so we didn’t have to stay in a hotel.

But what I couldn’t stop thinking about was everyone else who wasn’t so lucky. The families who couldn’t afford 5 tickets at triple the price. The man with no luggage paying for something he shouldn’t have to pay for.

Airlines are a business. It’s a luxury to be able to travel by plane, especially during a pandemic and the holidays. I get it.

But there has to be something we can do to help these types of situations. Employees on call? Not allowing prices to go up last minute? 100% refund guarantees?

I don’t have the answers, and I don’t know if this should be federally mandated or not. I do know that I don’t think it’s right how so many of our holiday experiences went down. Twitter let me know that things were much worse for many others.

My best advice traveling around the holidays in these conditions is to make sure you are financially able to take action if the worst-case scenario happens and to always remain calm despite the blunders of the system. We can’t take it out on the employees. It’s not their fault.

We’ve got to go to the top to fix it. Next year, I’ll be better prepared. Or better yet maybe I’ll avoid the flight’s “rush” altogether

I don’t want anything keeping me from getting home.

More stories from Cole Connor and writers in Wander and other communities.