A Beacon of Hope in the Face of Destruction 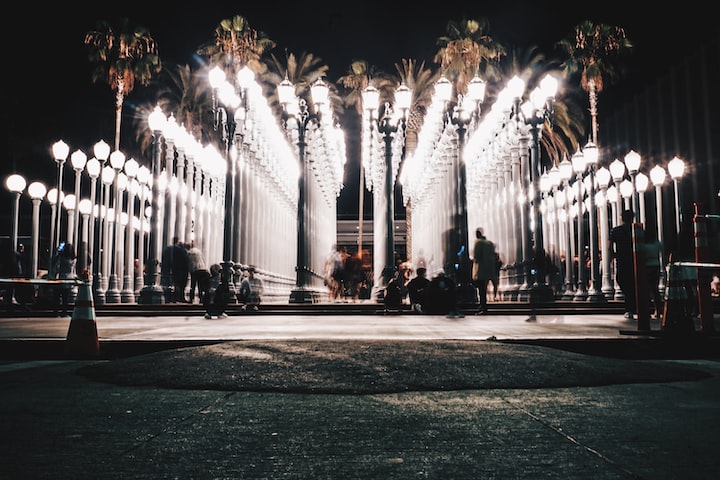 Photo by Ruben Gutierrez on Unsplash

When I travel, I will take in a museum or historical site. Some of my favorites have been Chichen Itza, the Smithsonian museums, and the National Mall. I have been visiting museums since I was a teenager, visiting many and only a few many times. The Norton Simon Museum has been a favorite since my first visit. Other museums include the Pacific Asia Museum, The Huntington Library, and the Los Angeles County Museum of Art (LACMA). Even with the current demolition and construction, LACMA still draws tourists - many stopping to strike a pose at the Public Art "Urban Light."

During the 2018 Spring term, my son and I enrolled in a Drawing and Composition class. We had the opportunity to take a trip to LACMA as a class. I had never been and was excited to visit a new museum. Many of the exhibits were closed, however, like many visitors, I was struck by the collection of street lamps located at the Wilshire Boulevard entrance. "Urban Light" is a large-scale assemblage sculpture by Chris Burden, who passed away in 2010. Burden restored street lamps that once lined the streets of Southern California during the 1920s and 1930s. According to the LACMA website: "Urban Light is turned on each day at dusk and turned off at dawn, according to an astronomical timer. The installation is always open for visitors." As many of us have experienced darkness and isolation over the past couple of years, "Urban Light" reminds us of hope - the light in the darkness. In his weekly message, California State University, Channel Island's President Richard Yao shared this message of hope from a colleague:

While these tragedies are so debilitating for us, we can never allow it to steal our hope. Once we become totally cynical about our efforts, all hope is gone... Without hope, there are some days I would not be able to get out of bed. We cry. We are depressed. We curse. And then we get up and put on the armor of hope and press on. As warriors, we do not have a choice in the matter. Giving up is not an option. We are fighting the long game. And I hope you will remain hopeful as well.

Considered the largest art museum in the western United States, LACMA contains many expressions of hope within its walls. Some of these works include Asian art and Latin American art; two of my favorites. LACMA features pre-Columbian art to works by artists including Diego Rivera, Frida Kahlo, and Jose Clemente Orozco.

Rivera, known for his fresco murals, was a staunch Marxist and often depicted historical events of his homeland, Mexico. Interestingly, I was not aware that this same artist was the one that painted the also famous calla lilies. LACMA has curated 12 of Rivera's paintings, including Flower Day (Dia de Flores). In 2008, Ilona Katzew, the curator of this piece stated:

Throughout his career, Diego Rivera created numerous easel paintings and watercolors representing the indigenous peoples of Mexico. Flower Day (Dia de Flores) is his earliest and most accomplished depiction of a seller of calla lilies. The unusual perspective of the flowers, which are seen from above, and the blocklike forms of the figures are stylistic devices derived from Rivera's earlier cubist paintings. Flower Day (Dia de Flores) is Rivera's first major painting to enter a public collection in the United States. It was acquired by the Los Angeles Museum of History, Science, and Art (LACMA's parent institution) after winning first prize in the First Pan-American Exhibition of Oil Paintings (1925).

Rivera's calla lily paintings continue to be some of my favorite and they are a symbol of peace and hope. A contrast to some of his more political paintings. Diego Rivera once stated that "there is no form of art which does not also play an essential political role..." (Kleiner 941). I think this also includes messages of hope in the face of adversity. When we leave the structural building of LACMA we are reminded of this hope as we pass through or by the "Urban Light" installation.

More stories from Rebecca A Hyde Gonzales and writers in Wander and other communities.