by Fakhar Abbas 4 months ago in middle east
Report Story

A Visit to Turkey 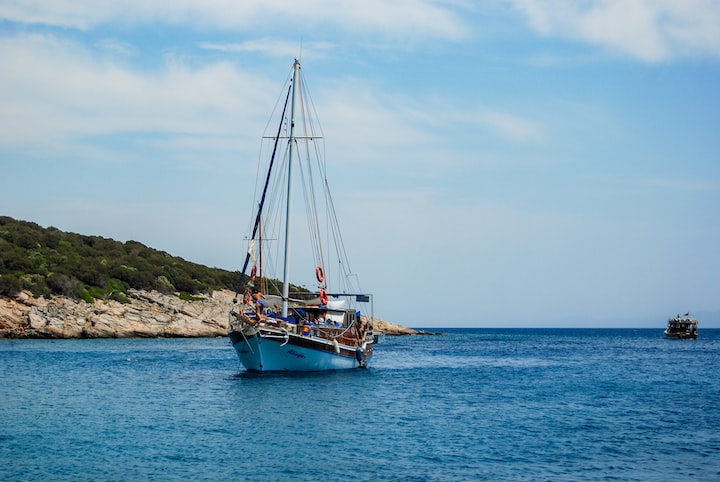 Photo by Engin Yapici on Unsplash

Bodrum is a beautiful city in Turkey, located on the shores of the Aegean Sea, surrounded by blue waters on three sides, the climate is hot and humid, so it is a paradise for European tourists. It was called Halicarnassus in BC. The mausoleum of Mouzoles was in the same city, this mausoleum is called the Mausoleum of Halicarnassus and it ranks sixth among the Seven Wonders of the World.

When I arrived in Bodrum from Manchester on July 17th, I saw European tourists everywhere, from Russian families to American citizens, there were thousands of white people walking around. There are 12 flights from Manchester to Bodrum every day. Filled with passengers, the pilot announced before take-off "I welcome you to the flight to Bodrum for the holidays" and "Happy Holidays" as the flight landed. The airport is far from the city, there are beach resorts all the way and all of them were fully booked.

I got a place in a boutique hotel in the center and it was quite an expensive hotel in Pakistani rupees but it was very nice, the rooms were built like a terrace on the hill and there were trees and vines up and down on the left and right, there was a swimming pool in the middle. People spent the whole day swimming in the pool or sunbathing and I sat and read a book. There are two activities in Bodrum. Tourists spend the whole day swimming in the pool or in the sea. Or they continue to explore the sea by riding in boats and in the evening, as soon as the intensity of the sun decreases, they bathe and come to the city.

Bodrum's central street wakes up all night, the old streets, neighborhoods and beaches are full of restaurants, coffee shops, ice cream parlors, bars and clubs, tourists stay there all night and go back to their rooms in the early morning. The next day they resume the activity, there are dozens of water sports companies, they also provide all kinds of facilities to tourists, and there are dozens of day tours from Bodrum to Ephesus, Izmir, Seljuk, Kuchadashi and Pamuk Fort every day. In short, it is a city to see and know anyway.

There is also an underwater museum in Bodrum, it contains wrecks and remains of sunken ships, ships were sunk in ancient times and it shows the way of life of that time. Two or three thousand years ago, people used to travel by filling water in pitchers, thousands of such pitchers were found in ships, there were also jars of food and dry rations, animal skins and leathers, jewelry and men's bones. The museum is housed within the fort and the fort is surrounded by the Aegean Sea on three sides.

The windows, crevices and ramparts of the castle overlook the blue water as far as the eye can see, the walls and floors are stone and can defend against all kinds of insurrections. The Mozulim of Halicarnassus is within the streets a little way from the sea, the building is worn by time but its signs show that it must have been a truly wonderful occupation, As I crawled and searched, I reached there before me a junkyard of broken pillars, in the middle of the junkyard there was a new building and in this building the sketches and structures of the mausoleum were kept.

It was a 136-foot-tall ten-story building and it looked at the sea from the slopes of the mountain for centuries, but time is still time and it swallows up the glory, beauty and glory of the most glorious and the rarest of things, and time has licked this wonder too. By the time I returned from the mausoleum, it was late evening and there was really no place to sit in the center, people were walking shoulder to shoulder, reading restaurant menus and entering the restaurant of their choice. After dinner, they would head out to a coffee shop, teahouse, ice cream bar or disco and spend the rest of their lives engrossed in the tunes of dancing and dancing, and this was the Bodrum tradition.

I stayed in Bodrum for two days, I forgot many times during this time that this city is part of Turkey and Turkey is a Muslim country, everywhere was European standard, cleanliness and luxury and also everything was halal and during the day the sound of adhan was heard five times, mosques were also occupied, Bars were open and no one was bothering anyone, people were eating, drinking and dancing, no one was disturbing anyone, a river of economic activity was flowing throughout the city, boats and Taxis were moving.

Restaurants, coffee shops and clubs were full, shops were crowded and people were walking fearlessly in the streets, there are hundreds of European families living permanently by the sea, I also met German families who have been living in Bodrum for 20 years and enjoying life. Renting a pension or property from Germany, living in their own villa in Bodrum, sailing on their own boat and enjoying kebabs in Adana and Arafa, these people even know Turkish language.

People from Britain are also permanent residents in Bodrum, I also guessed from talking to these families that these people are in Bodrum because of the weather, living standard, peace and cost of living, it is very cold in Europe and it is expensive, so these people settled in Bodrum, secondly, there are daily flights from Bodrum to Europe and these people can travel around their city whenever they want with a ticket of fifty to sixty euros, the Greek island of Kos is only 20 minutes away from Bodrum.

A daily ferry departs from here and brings tourists back after visiting the city of Hippocrates, Hippocrates, who belonged to qous, was the first physician in the world to treat the soul, mind and body as a unit. He said that unless you treat the body, mind and soul of a sick person, that person cannot fully recover. He built the world's first hospital in Qaws in which patients were not only treated physically but also healed their souls and minds. The traces of this hospital are still there today. I missed my ferry so I couldn't go but God willing I will make the rounds next time.

Kusadasi is another beautiful city about an hour and a half drive from Bodrum, it is considered a honeymoon city, it also has beautiful seaside resorts on the slopes of the mountain, and international ships also stop at Kuchadasi. The streets are also ancient and cobbled and the houses are made of stone and old bricks. There are a lot of shops and restaurants by the sea and it gets really busy in the evening. I got to Kuchadashi by bus from Bodrum, Turkish buses are very comfortable.

390 / 5,000 Translation results The service is good and punctual, Bodrum's central bus station is as spacious and beautiful as the airport, tickets are the same as boarding passes, the building has underground parking and the same shopping area and coffee shops as the airport. It didn't look like a bus station by any means, there are elevators inside and electric stairs and waiting areas like lounges but the bus staff at Kocha Dashi was average.

I had the opportunity to spend one night there, I took a hotel by the sea, the rooms terrace opened to the sea and it was very beautiful, I spent that evening in the streets of the old town, had dinner in the old restaurant and the night and strolled along the shore till late at night.

I was to go to Seljuk city the next morning. This city was settled by Seljuk rulers a thousand years ago. It was also the capital of the Seljuk Empire, but it is now a small town, with a total population of 34,000 people. However, it is still considered a major tourist priority.

More stories from Fakhar Abbas and writers in Wander and other communities.