The world is your oyster

by Erica Wagner 2 years ago in europe
Report Story

A postcard from the coast of Brittany 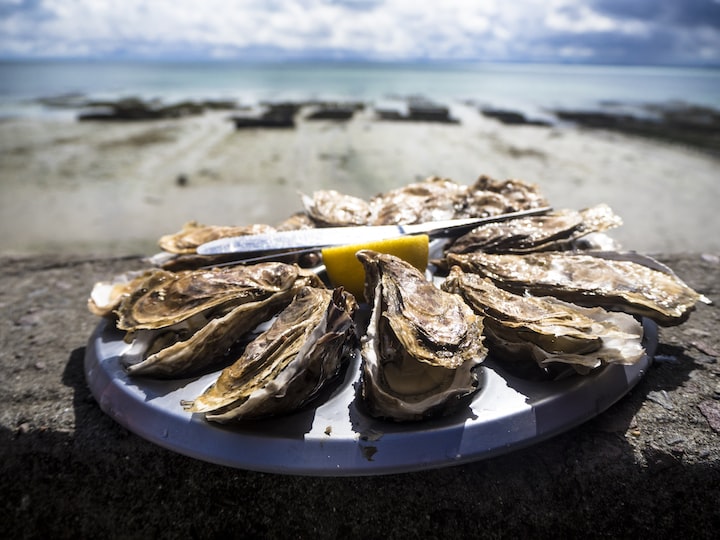 Photo by Tommaso Cantelli on Unsplash

It's an hour before noon in Cancale, on the coast of Brittany; head down to the edge of the sea — the port is called La Houle — in the chilly sunshine and wait, perched on a stone wall. Soon, you see them come into view, the little oyster boats, chugging into shore with their morning's catch.

Cancale sits on a spit of land between the port city of Saint-Malo and Mont-Saint-Michel, Normany's famous castellated island, cut off daily by an inrushing tide. But if you are a lover of oysters — as I am — then you will surely head to Cancale, long renowned for its catch.

What is it about an oyster? "The world is your oyster", my mother used to say, when she meant: you can have anything you want. And yet, that's not quite right, I've always thought. The oyster is desirable but hard to get to: the first human to figure out how to pry open that squeezed-tight shell must have been awfully hungry. The world is your oyster: you can have what you want if you're willing to work hard to get it, then, as good a rule as any.

Right now, holed up in lockdown, I want to eat what's fresh and free, and there's nothing fresher or freer than an oyster, surely. Sweet, salty meat, the essence of the ocean, a hard-won jewel scraped off its pearly shell. My mother, as it happens, loved oysters: when I was a girl I'd watch her eat them, mystified and a little frightened. The words I thought of then, when I saw an oyster, were not fresh and free but raw, quivering, grey. Yet when I saw my mother eat oysters I saw too how they transported her somewhere else: to the France she first loved as a teenager, to the dream of a tangy, exuberant life far removed from her own. And so, finally, when I was sixteen and we were together in France, I asked to try one of her oysters. She let me. I took the rough shell in my hand and held it; I squeezed a little lemon over the flesh and imagined I could almost see it shudder. I held it to my mouth like a little cup and let the meat slide onto my tongue, a quick chew and a swallow. . . a sensation unlike anything I'd ever eaten before, sensual, vivid, exciting. The next day she ordered oysters again. I asked for one; she gave me one. And so to the third day; I asked one more time. "Order your own," she said, smiling, and ever since then I have.

So in Cancale, we wait until we can see them returning with their catch, red and blue, green and yellow, cheerful sturdy vessels churning the water as they come in to dock. We pace along the sea-wall, waiting for them to tie up, to unload their catch and set up the stalls of their wares: huîtres creuses de Cancale, cupped oysters, their shells rounded rather than flat. They've been sorted by size, numbered up to five: the smaller the number, the bigger the oyster. Me, I favour a smaller mollusc, something delicate, neat in its shell.

The fishermen transform themselves from sailors to servers: stubby little oyster-knives appear, paper plates, sunny lemons ready for slicing. Une douzaine de vos belles huîtres, s'il vous plait! A dozen of your gorgeous oysters please — and we watch as with practised force the oysterman twists his blade into the hinge of the shell, cuts through the muscle to free it from its glistening bed, one and then another and another until twelve treasures knock against each other on the flimsy paper plate, wet with seawater and the liquid of the oysters themselves, a strand of seaweed still clinging, the blade now cutting through a lemon, squeeze, squeeze. We hand our euros over. Everyone is smiling. The sun smacks onto the water's face, shining.

We go back to the sea-wall and lift the shells to our lips, our necks bent back, salty, lemony oyster, fresh and free, sliding into our mouths, true nourishment, life itself. Won't you join us? Of course you will. See you soon, in Cancale: nous vous y acceuillerons, nous mangerons des huîtres ensemble.

More stories from Erica Wagner and writers in Wander and other communities.