AJ
by Arslay Joseph 28 days ago in humanity 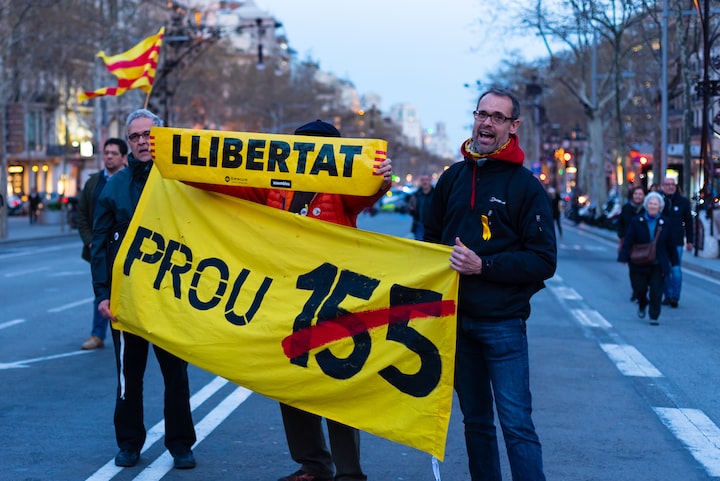 Plaza Catalunya is the symbol of commercialism in Barcelona. The cramped local spots that characterize other parts of the city were absent. Instead of Spanish and Catalan storefronts, it's home to some of the biggest brands in the world: Zara, Louis Vuitton, McDonald’s. Here, not only could you get by on English, but it was the language of choice.

Every global city, at this point, must have something like a Plaza Catalunya: a shopping center that resembles downtown Manhattan more each passing year. For an American traveling abroad, this place was like a little slice of home. If I ever needed to buy clothes, I knew exactly where I could find Urban Outfitters. I would rave to folks at home about the superior quality of Barcelonian KFC. Rumor even had it that a Chik fil A was on its way.

You could imagine my surprise, as a study abroad student walking home after a night out, to see this urban spectacle defaced. The huge October demonstrations had happened a few days ago, and they sure left their mark. The ashes of dumpsters and vehicles lit aflame littered the streets. Graffiti was everywhere. Imagine bright McDonald’s ads covered with hammer and sickles. Protestors immortalized their anger on sidewalks, windows, and wherever else they could reach. "Llibertat!" “Fuck Gentrification!” “Puta España!”

Now, the streets were empty, save for me and a hooded pedestrian, presumably in his twenties. I caught him spray-painting the anarchist A on the sidewalk. He asked for a light and I asked for a cigarette, and soon we got to chatting. He got a few laughs out of my awkward Spanish, despite noting it was good “for an English speaker.”

It didn’t take long for small talk to turn political. Xavi was eager to wax eloquent about “fascist” Spain and rich tourists who were ruining the city.

“I need English to find a job in my own fucking home. It doesn’t even feel like Barcelona anymore. ”

At first glance, the conflict was local. The struggle for Catalonian independence is centuries old, at the core of Barcelonian identity. It represents the fight to keep the Catalan language alive, preserve local traditions, and achieve political autonomy. Tensions re-ignited in October after the Spanish Supreme Court sentenced a group of Catalonian politicians to prison time for carrying out a referendum on independence. The outrage was immediate, and thousands took to the streets.

Yet this time around, an old struggle took on new dimensions. You could see it in the youth clashing with the police. In how protestors complained about AirBnB and wealthy tourists as much as the Spanish government. In how Plaza Catalunya was targeted for this visual revolution.

“My family lived in the Gracia for generations,” Xavi complained. “We are thinking of moving out soon.” He shrugged. “Can’t afford the lifestyle.”

Somehow, frustration against the Spanish Supreme Court and gentrification became intertwined. For many, like Xavi, these struggles became inseparable. The symbolism of the street art struck me. These artists were taking back their city, reclaiming their city from the forces that would take it away.

As I walk through the graffiti-riddled plaza, I can't help but think of Brooklyn, Boston, Wynwood, and the countless other cities; of all the residents pushed out of their homes to make room for the ever-expanding urban spectacle. It begs the question: When were these other places going to have their moment? What would it take for people to do Time Square like they did Plaza Catalunya?

In the coming weeks, everything seemed to settle back to normal. Over time, the graffiti disappeared from the sidewalks, windows, and signs. People went back to work and continued to shop at Plaza Catalunya as if nothing ever happened.

The urban spectacle was able to remain, unchecked, unchanged, undefeated.