by Darryl Brooks 3 months ago in activities 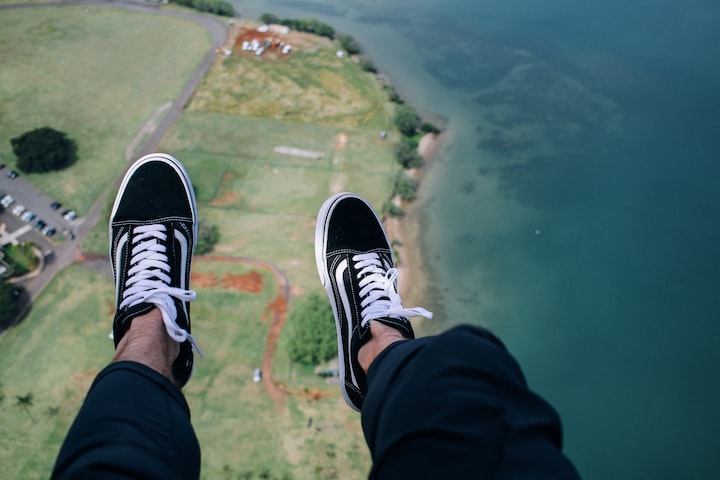 Photo by Colton Jones on Unsplash

I arrived at my friend’s apartment a little after eight on a Friday night. He had this new thing called cable TV so we hung out there.

Tim said, “Frank and I are going to go jump out of an airplane tomorrow, want to come?”

“Sure,” I said with no hesitation. There would be hesitation, but much later.

The next day, we hopped into Tim’s truck and drove to Dalton, Georgia. On the way, the cars behind us were likely getting spattered with testosterone from that truck. We were, by God, going to jump out of an airplane. A feat few humans had ever attempted, and fewer survived.

We got to the dirt airfield outside of Dalton, where we met our jump-master, a soft-spoken man in his twenties. He checked our gear and gave us jumpsuits. We had to wear our own boots and helmets. Tim and I had motorcycle helmets, but Frank had an old football helmet and looked like Jack Nicholson on the back of Dennis Hopper’s bike in Easy Rider.

We went through lessons, learning to fall and roll. The jump-master told us what to do if this or that went wrong — not that it would. We were shown how to cut away the main chute and deploy the backup. This was in the days before tandem jumps. We used a static line to deploy the main chute as you left the plane. After that, you were on your own.

Finally, the moment arrived, and we got parachutes to strap on. Not the colorful sports parachutes you see in air shows. These were round, green, army chutes. The kind Germans used to shoot at. The jump-master rechecked our gear, and we headed toward the airplane, a Cessna 182.

The 182 is a four-seat plane, but all but the pilot’s seat was removed. A modification to the door allowed it to stay open in flight. As we stood by the door, ready to board, we met the pilot who would supervise boarding.

“Who wants to go first?” he asked.

“I do,” I said. We’re not quite to that hesitation part yet. We all crawled in, sat in our assigned spots, and stared at the floor. We were sitting on the floor and were too low to look out the windows.

As we started rolling across the grass toward the airstrip, a thought occurred to me that I probably should bring up. At the tender age of twenty, I had never been in an airplane before. I wondered, in a sort of detached way, how I felt about flying. I had been so focused all day on jumping out of a plane; it never crossed my mind that I would have to fly in one first.

The jump-master had several jobs to do. The first was to determine, based on wind speed and direction where to jump. This wasn’t a very scientific process. Over the landing zone, he opened the door and threw out a small weight with a long colorful flag tied to it. However far downwind it landed, the drop zone is that far upwind. Sitting beside the door, I got to see the ground from three thousand feet two inches to my left.

While the pilot circled back around, the jump-master went back over the instructions.

“When I say get ready, pivot so your legs are outside the plane. Put one foot on the step. Grab the strut with both hands and pull yourself out. I will yell go and tap you on the arm. Let go as you push yourself off. I want to see a good hard arch, and I want to see you look up at me as you count. On the count of six, look up, make sure your chute has deployed.”

He took my static line and clipped it to the eye bolted to the floor. He handed me a section of the line.

“What do you want me to do with that?”

“I want you to make sure it is attached to the plane.”

“Good point,” I said as I gave the static line a hard tug.

That’s when we reached the drop zone.

I assumed the position. At that point, I was hanging onto the outside of an airplane flying at sixty miles per hour, three thousand feet over the countryside.

“GO!” he screamed and tapped me on the arm.

We had now reached that moment of hesitation. I quickly went through my options. Get back inside, let go, or just keep hanging on.

“Go!” he repeated, tapping me a little harder. He was letting me know that option three was not a viable one. Since option one would be a hard one to live down, I went with two and pushed back from the plane, pulling back into….

There are a couple of things I need to explain here. The human brain is not really geared up for falling at a hundred and twenty miles an hour. It doesn’t know what to do with that information and therefore quits processing any information at all.

The other thing is this. Don’t waste time taking lessons, listening to lectures, and practicing procedures. We had just spent three hours covering every possible contingency. At that moment, remembering my name would have been difficult.

At any rate, several days later — or six seconds in real-time — my parachute opened. At least I guess it did. I never did look up to check. You would think that would be useful information, but I was too busy to think about it. When I touched down, I was filled with a sense of joy and wonder never repeated.

We spent the rest of that summer driving up to Dalton every few weeks and jumping out of airplanes. Since we only got a chance to jump once or twice a month, we never got very good at it, but the excitement never abated.

One of the things you learn in class is that once you are falling under the canopy, your descent is so slow that you don’t have a feeling of falling at all. Until you reach a point where you can watch the horizon moving, you don't feel like you are falling. Then you can look down and see the earth rising gently toward you. When everything works, you hit the ground as if jumping from a low bench, landing on your feet. If not, you learned the technique of rolling, using feet, knees, hips, and shoulders.

On about my third jump, the wind shifted and picked up while we were up there, and neither the pilot or jump-master noticed. Not having the experience to know this, I turned the parachute to face the same direction as always. This was bad. Not only was I facing downwind, which moves you faster, but the wind had increased.

I was still moving relatively slow compared to free fall, so I didn’t know anything was wrong until I saw the horizon in front of me. It looked wrong, so I looked down. Instead of the ground gently rising toward me, it was coming at me very fast and was about to slap me out of the air very hard.

I was certain that I wouldn't survive the impact and there was no doubt in my mind that I was about to die. I remember a brief moment of sadness and regret, followed by resignation.

What I believed would be my last thought in life was, “Well, it’s been fun.” That would look good on a headstone, wouldn't it? Except at that point in my life, I would most likely be buried by my father. So the headstone would say, "Here Lies Darryl Brooks - Dumbass"

Spoiler Alert: I lived. Although with some possible brain damage.

I only had a second to enjoy my new lease on life however. Immediately, I also realized that my parachute was still open and was flying across the field at fifteen miles an hour, with me attached to it. At this point, I would like to retract my earlier statement about the lessons being a waste of time. After a quarter-mile or so of sliding across a hard and rocky plane, I remembered something the instructor said.

“If you ever find yourself in a position where you are being dragged across the ground, do the following.” My memory was that it was a very silly thing at the time I heard it. “Grab the shroud lines closest to the ground and start pulling them toward you. Eventually, this will let the air out of the canopy, and you will come to a stop.”

Guess what? It worked. I finally stood up and gathered my parachute around me for the trek back to the landing zone. I was beaten, bruised, and bloody, but I was alive. When I finally got back to where everyone else was, my adrenaline turned to anger as the jumpmaster casually looked up and asked, “Where you been?”

If you enjoyed this article, please consider dropping me a tip below. I promise not to waste it on skydiving lessons. Thanks for reading.

I am a writer with over 16 years of experience and hundreds of articles. I write about photography, productivity, life skills, money management and much more.

See all posts by Darryl Brooks →