by Lissy Wrey 13 days ago in solo travel

Why one man's kindness reminds me of all the good in the world. 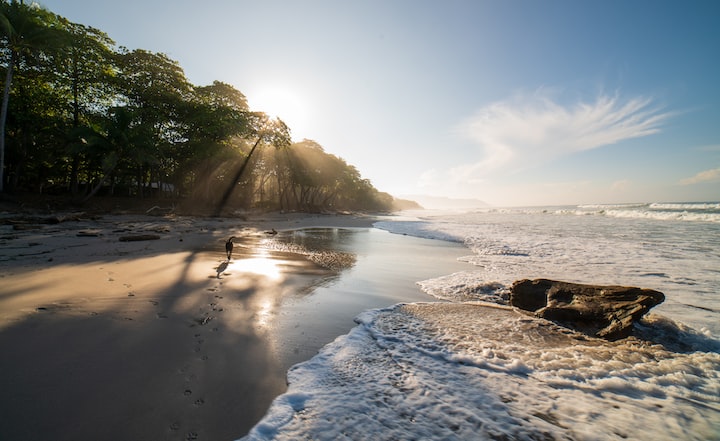 Photo by Nathan Farrish on Unsplash

A couple of years ago, I spent three months travelling around Costa Rica. I had wanted to visit the tiny Central American country for years. It called to me. The mangroves, the cloud forests, the beaches. I wanted to swim in extinct volcano craters. I wanted to watch capuchin monkeys swinging in the treetops above me whilst I sunbathed. I wanted an adventure.

But what attracted me the most was the reputation of Costa Rica’s people. I had heard again and again that the locals were some of the friendliest in the world. I felt this from the moment I arrived, but there was one man in particular who confirmed this for me; a stranger I met at a bus station.

I left my volunteer placement in Cabuyal early one morning. I was keen to move onto a more populated area. I was also keen to find sugar.

I made my first three connections easily without looking at the timetable. Before I knew it, I was one stop away from my destination, La Fortuna. But when I reached my penultimate stop, I hit a snag — there was a four-hour wait until the next bus.

Laden with my bulging rucksack, I made my way to the roadside to spark up a cigarette. As I was rummaging through my belongings in search of a lighter, an elderly gentleman appeared waving one in my face. He exuded warmth.

“Gracias, senor,” I smiled thankfully, accepting the lighter with ease.

He sat on the wall beside me as I studied him with intrigue. He wore huge, thick-rimmed spectacles which magnified his kindly eyes; laughter lines adorned the corners. His baggy white shirt was rolled up to the elbows, showing off his thin yet far from frail hands. He puffed on a cigarette, all the while a smile spread across his face. I imagined him to be a granddad many times over, his house brimming with family, love and laughter.

He turned to me, smiling and gesturing while speaking in Spanish, fast.

Embarrassed by my weak grasp of the language I apologised, “Lo siento pero no entiendo. No hablo Espanol.”

Undeterred, he waved at the sky. “Caliente, caliente.”

I knew that one. “Si, si, muy caliente,” I laughed with relief. It was indeed very hot.

Despite the language barrier we muddled on, communicating through gestures and single words, for the next 20 minutes. Somehow we even managed to determine we were both waiting for the same bus. It seemed I had found a friend for the next four hours.

As the day bore on, I watched the man. He bustled about the station, chatting to everyone. He helped elderly ladies onto the buses with their shopping. He came to check on me every 10 minutes or so, handing me exotic fruits and spare cigarettes.

At one point, I wondered if he worked there. After all, he seemed to know everyone who passed through and treated them as if they were old friends.

When the bus to La Fortuna pulled up, he rushed over to me, gesturing wildly. I heaved my bag onto my shoulders only for him to take it from me immediately.

After placing my rucksack in the luggage hold, he escorted me to the front of the queue — nobody seemed to mind. I chose a window seat near the front of the bus, and after a smile and a thumbs-up, my new friend took the seat in front of mine.

I’m one of those people who can sleep anywhere, and so within minutes I had dozed off, only awakening when I felt the bus slow and pull into the station at La Fortuna. The seats in front of me were empty.

I collected my bag and scanned the crowds. My friend was nowhere to be seen. I wanted to thank him for his kindness. I felt that after just four hours together I needed to say goodbye and wish him the best.

Deflated, I headed to the ladies, disappointed I couldn’t find the old man. And then, I felt a tap on my shoulder. I turned to be faced with the biggest, toothiest smile. My friend. He embraced me warmly, laughing, and chattering away.

With a final pat on the back, the little man disappeared into the crowds, never to be seen again. And with a full heart, I embarked on what would be the most wonderful leg of my journey so far.

The things we never forget.

It’s been five years since I visited Costa Rica, but I still remember my friend’s face, and this encounter, perfectly. It’s stuck with me for all these years, and I imagine it will forever.

Because he reminded me of the kindness of strangers. He reminded me that some people just want to do nice things. They don’t have any ulterior motive, and they wish for nothing in return. This man reminded me of all the good there is in the world. It’s out there, everywhere, in the unlikeliest of places. Sometimes we just struggle to see it through all of the darkness and pain.

And I remember him because of how he made me feel. He made a young solo travelling female feel welcome and at home. He made me feel safe. And he did it without even trying because that was just the kind of man he was.

If you’ve ever watched the British version of The Office, you’ll be familiar with the character David Brent. He’s always attempting, and hilariously failing, to make profound comments. But in the final episode, he actually manages it. He says;

And I couldn’t agree more.

The humanitarian souls amongst us are forever looking for ways to positively impact others, to change the world. I berated myself for years when I was working jobs I felt meant nothing. I wanted to make a difference. But David Brent was right; it’s possible to do that every day, just by being a decent human being and by being kind to your fellow man.

That’s all my Costa Rican friend did — be kind. And because of his extraordinary kindness on a very ordinary day, I’ll remember him forever.

We’re constantly bombarded with news, most of it bad. We binge watch serial killer documentaries, we despair over the demise of our planet due to the greed and activities of a selfish few. We’re conditioned to expect the worst of people because we’re constantly shown the ugly side of human nature.

If there’s one thing solo travel has taught me over the years, it’s that people, for the most part, are good. They’ll extend a hand when you need one. They want to help. And most importantly, you don’t always need to fear strangers. In fact, a stranger can turn into a friend in a heartbeat.