The most unforgettable day at Zion National Park!

by Chelsea Martínez 5 months ago in nature 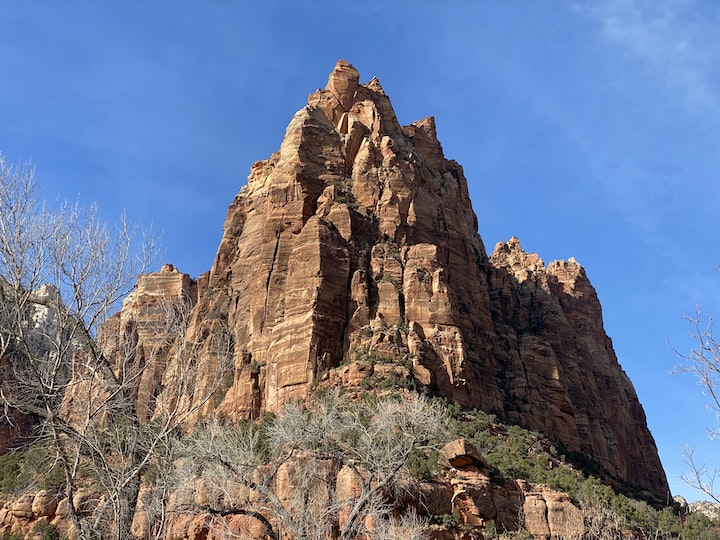 Photo by David Lusvardi on Unsplash

There are many trails for you to hike, but my goal was to hike "The Narrows", the narrowest section of Zion Canyon. This gorge is one of the most popular areas in Zion National Park, with walls a thousand feet tall and the river sometimes just twenty to thirty feet wide.

I had been told that I was going to have to get my feet wet because I had to hike in a river. However in my head I was thinking that I was probably just going to hike in the river in order to cross from one side to the other or just be in it for a short distance. But this was far from the case.

I started to walk from the point I was dropped off on a pavement path along side the river. I was thinking that I was already on the hiking trail and that's what it was going to be all about, along with, at some point having to cross the river. However, not too long after, I realized that my expectations were completely wrong.

The first thing that I had to do was decide whether I should take off my shoes or not. So I took off my shoes and tied them to my backpack. Then I went in the river, and damn was the water cold! Perhaps the coldest water I have ever felt, but I knew I would adjust eventually.

I started to hike with my brave self. I could not see the bottom of the river even though the water was mostly up to my knees and below, and sometimes my thighs. It was an uneven bottom with many rocks of all sizes, so I kept hitting my toes, feet and legs into the rocks. I was also slowly getting numb because of the water temperature. My feet were hurting from stepping on those tiny stones while I was freezing. At some points we would get to walk on sand though. Minutes upon minutes passed and I was still thinking that this river hike was going to end at some point and I would be back in some land or at least just sand. But wrong... it was only getting worse!

I was wearing a shorts overall with a pocket on my chest where I kept my phone because I wanted to take pictures along the way, of course.

I was hiking with my friend (Ania) and after around an hour of hiking, we ended up at a sandy spot where we are off the water and we got to rest.

At this point we met up to a few people that started to hike with us but were ahead of us, clearly.

To continue, we had to go across the river but as we are about to do so, they warned us that the water there was too deep and the flow was too strong. However we decided to give it a try and Ania went first to check it out.

As she reached halfway across the river, she turned to me saying that she couldn't make it so I asked her to come back to the sand with me to try another way. I still went in the water to help her by giving her a hand and make it easier for her, but as I was turning back to the sand I lost balance because of how the bottom of the river was. I had to bend down to hold on to a big rock when my phone fell out of my chest pocket...

I wanted to die! I instantly freaked out and started to search for the phone. At this point I didn't care about anything getting wet anymore. Everyone around me including Ania was helping me to search for it. Like I said earlier, I couldn't see the bottom of the river so I was just feeling it with my hands and hoping to be lucky enough under those circumstances to find my phone.

I ended up wetting up my shoes hanging from my bag, my bag, my clothes, everything! But I didn't want to let my phone go. I literally wanted to cry and for the river to open up and eat me, but I knew that wasn't gonna help me either. So I kept searching and searching, and asking Ania if I should give up, while she would tell me that the water flow probably already took my phone far away. I went in the sand to put down my glasses that were also in that pocket and went back to guess where my phone dropped.

My heart wanted to come out of my chest. I wasn't thinking about how much I even paid for my S8 just the previous year (even though I mashed it up, but that's another story) but how in that phone I had all my memories from summer 2017 until that point. I had over 5,000 pictures and videos, including my previous trips to Minnesota, France, Wisconsin, New York, Miami and Las Vegas among other special occasions. I was about to lose my whole journey because I didn't even have it all saved on the cloud or anything.

People kept walking by asking what happened and pitying me, I could swear!

I consider myself to be fearless but that incident sure scared the hell outta me. Even though I knew that my chances of getting that phone back were low, I didn't want to give up.

I kept praying to God to find it... and a few minutes later, even thought it felt like much longer, you damn right I found it!

I literally just kept feeling the bottom of the river, and miraculously I felt my phone and took it out! No one could believe it. *phew* I felt a bit better but now the question was whether or not my phone was going to work, if I was going to be able to recover all those memories.

I dried it and it was still on but a lot of water was in both camera lenses, and the phone was not responding as it would usually. I was told to turn it off, but it wasn't turning off either so I put it in my bag this time.

After I got myself together again, it was time to turn back any way because I didn't have all day to spend there. Others from the group I went with were also returning because apparently to finish that hike you would have to take a whole day.

So we started to go back the same way we came. I'm cautiously walking when all of a sudden I fall in the "deep end", where the water reached around my chest. Now my bag is also wet, and I'm left worried thinking how my Polaroid camera and another non water proof phone was in there. Good thing that someone helped me to get back on the not so deep path and I continued walking until I reached to the start of no water. HALLELUJAH!

OMG! I was all wet, numb, worried and hungry! I checked my stuff in my bag (everything was okay), ate a snack and put on my shoes to finally get the hell outta there!

It was funny that this happened because I actually knew, and mentioned to Ania that where I was putting my phone was not safe because I had drop my glasses from there a few times before. Yet I still went and kept my phone there.

Also, on my way to that park I was telling Ania my stories of how I once left my laptop at the airport in North Carolina, how I recently left my neck pillow in the plane, how I left my special sunglasses case (because my mom gave me) in a classroom that was locked on me, among other things that you wouldn't think happen to anyone else but you. But hey, those are different stories!

After all, it was still a good experience and kinda intense... making this park my 2nd favorite (after Yosemite National Park) of the West Coast, USA.

With that said, this was definitely a day I could never forget!

PS. my phone took a few days to fully dry off and function properly, but it did it!

Tips for hiking this trail:

- Have the appropriate clothes and do wear closed toed shoes, THE RIGHT SHOES! (perhaps plastic ones).

- Make sure that your backpack is light, and contains enough water and food.

- Be prepared to hike for hours. You can hike in the river for an hour or you can hike as far as Big Spring, a ten-mile round trip, all-day adventure.

- Keep your phone in a safe place!!! I later on bought a clear waterproof waist pouch.

Travel isn’t always pretty. It isn’t always comfortable. Sometimes it hurts, it even breaks your heart. But that’s okay. The journey changes you; it should change you. It leaves marks on your memory, on your consciousness, on your heart, and on your body. You take something with you. Hopefully, you leave something good behind. – Anthony Bourdain