by SKYLERIZED 2 days ago in photography

The various elements all coalesce. 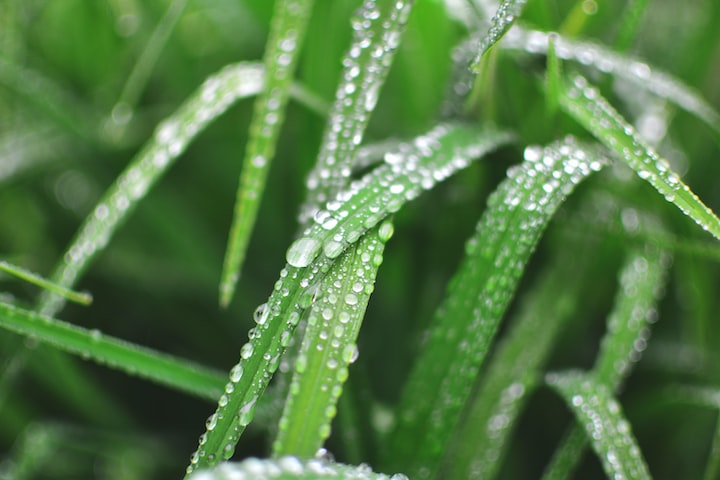 Photo by Nikolay Zakharov on Unsplash

Slick with rain, the street looks like a horizontal asphalt water slide. The cars pass intermittently like the rainfall. Where are these neighbors going? Do they consider the green grass from the manicured lawn? The blades raise up like hands to the sky.

Parked vehicles line the street. One is a silver car with a missing hubcap that makes it look like an eye patch from the side. And the all-weather American and Marine Corps flags hang slightly slack against the faint breeze. They tell their own story. The red, white, and blue most likely can be viewed in the mind. A light from the ground gleams a sense of liberty on Old Glory. The stars and stripes make a contrast against the blue field and red stripes, respectively. But the Marine Corps flag, with the Eagle, Globe and Anchor is all red to represent the blood shed by thousands of Marines since the inception of the Corps on 10 November 1775. The eagle possesses a banner bearing the Latin phrase “Semper Fidelis” or Always Faithful. The wings spread out like they are real and prepared to fly off of the flag. 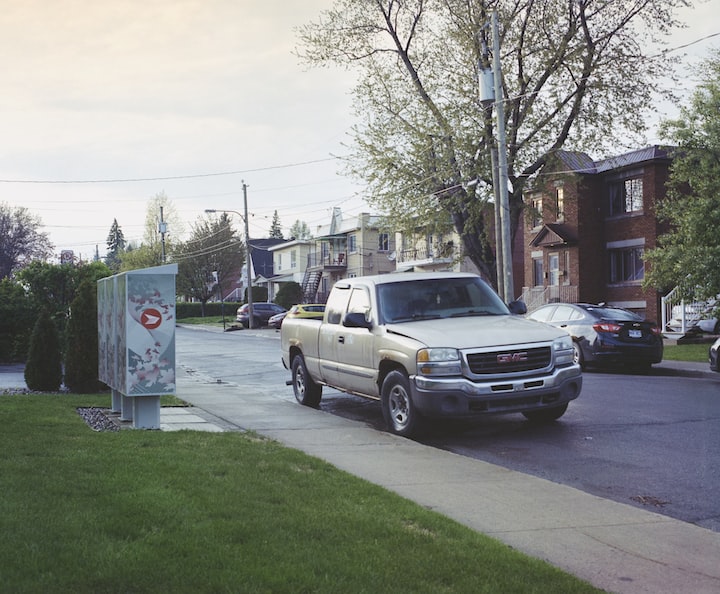 By Jp Valery on Unsplash

The flowers near the flags tell a story of a fight to look so gorgeous. They had to struggle into existence just like any other living organism. Purple and green look like two thirds of the Mardi Gras colors. The draw of the flowers drooling out of the pots speak of life being furnished by the droplets from the sky.

The driveway tells a story about how one vehicle is in the garage and the other is adjacent to it. The driveway looks like a wet canvas that has just been cleared of paint. But what do the car with the missing hubcap, the grass, the flags, the flowers all have to do with one another? They all make for a story. 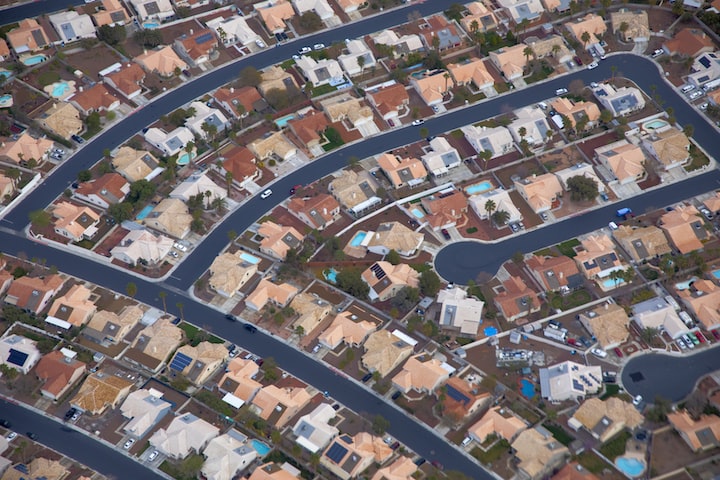 By Jean-Philippe Delberghe on Unsplash

The car may have been traveling to a rougher area and someone might have removed the cap. Grass strives to live through the help of the rain. It’s story lies in the fact that its green opulence wishes to be tread upon and to be viewed affectionately.

Flags in the rain would not be authorized but these are built for light rain. Tales lie in the fact that America thrives in the most dire circumstances. Marines protect America like the central nervous system and the immune system. These tales behind these swaying flags permit any onlooker the power of bearing these standards. The story of the flowers lie in the fact that they are children. Mother Earth has produced them to adorn households like this. Their story lies in the fact that rainy days like this are like milk to an infant’s mouth. 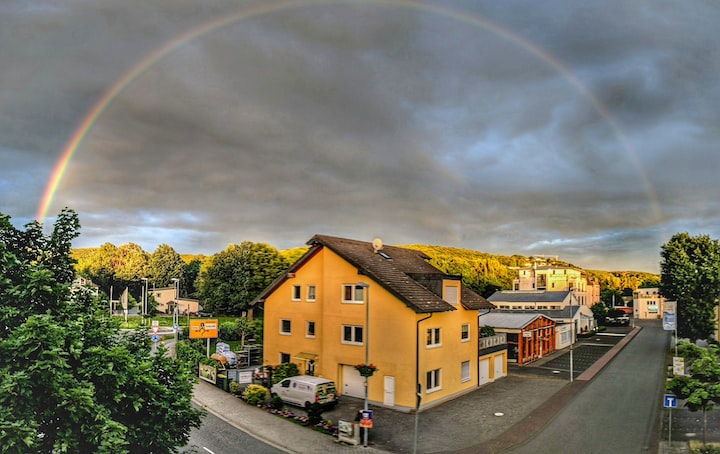 By Amol Tyagi on Unsplash

The narrative of all of these elements allows even the most casual observer to realize the various textures and colors. Switching from red to blue in the flag means that there are purple flowers to consider in the same image. The silver car with the missing cap matches the color of the globe in the Marine Corps flag. The green of the grass is like a payment to Dad, the lawnmower. Well-kept, the grass brings together the story of all of these pieces outside of my window.

By focusing on what these disparate objects have in common you can see the motion of men and women and children. You can see the lawn clipper going around the edges like a barber shaping up a client. Dad hangs the flowers with care and intense concentration making sure that they pop against the lush greenery.

The flags draw to mind Dad, who raised them on the poles to demonstrate the pride in a nation and the armed forces. Little kids skip across the driveway. One of them, a brown skinned girl with a beautiful hairdo all wrapped up in plastic says, “Look at those flowers. I’m going to get some of those one day.” 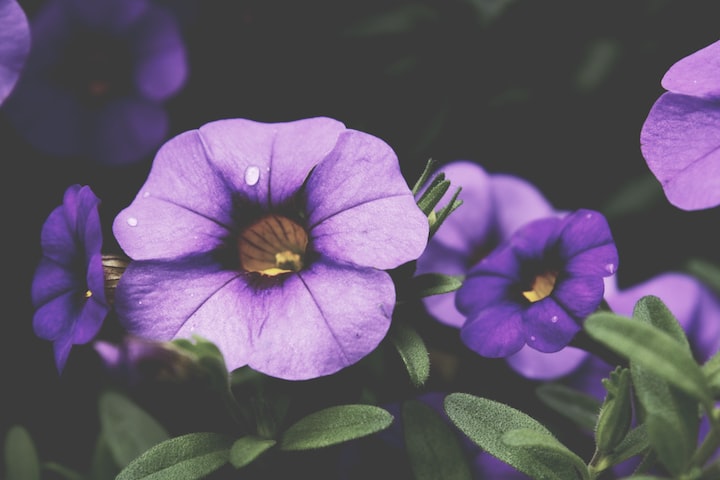 By Stefan Spassov on Unsplash

And the grass talks, too. It says to the rain, “Continue to fall, I don’t mind.”

Passersby with rain boots and hooded jackets talk about how the two flags command respect. “I have to stand at the position of attention in my mind,” says Omar. He’s tall and dark skinned with a gold tooth.

Purple flowers speak. They say, “Did you know that there once was a man with a royal name with our color as his signature who made dozens of songs?”

The car without the hubcap says, “So I’m listening to everyone saying that I’m not whole. I run better than some of these luxury cars on this road.” 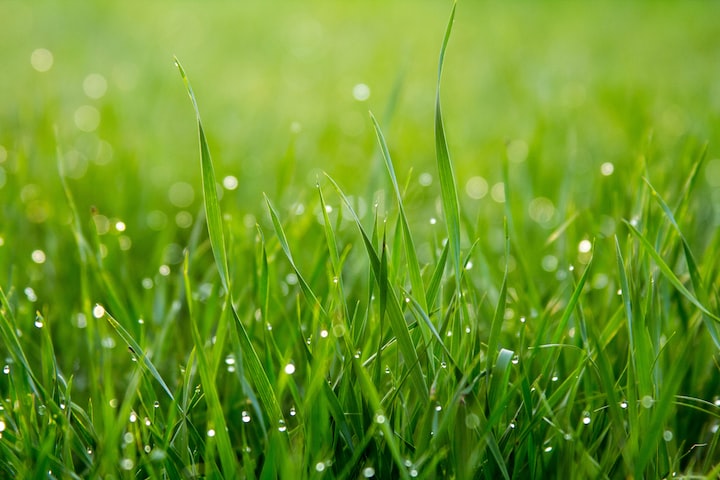 Once they all speak their stories, they don’t know when to shut up! They coalesce into a grey sky that looks like a blank slate. Some droplets reach the earth. A woman about twenty-years-old in orange galoshes stops by the house. She stares at the elements around her person. And then at me. Her pearl visage is cold and exhibits sharp angles. Blistering black eyes stare from underneath a hood. Red lipstick looks like a fire engine. She smirks and continues down her journey to her suburban fortress. But what was her name? What struck her the most? The cars, grass, flowers, flags...what?

This mosaic of multiple things that form a single sight excites the senses. 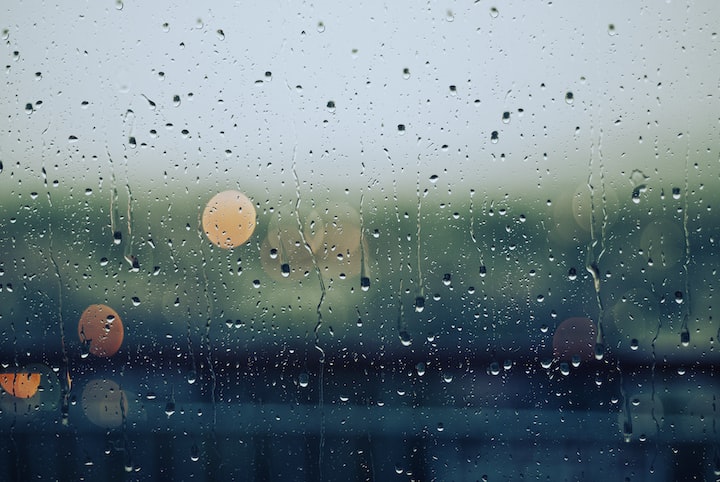 By Gabriele Diwald on Unsplash

The mind can smell the grass with its earthy scent. Purple flowers offer their fragrance. Sounds persist, too. Once the wind kicks up, the flags make a flapping noise in the breeze as if they are about to fly off the poles and grow large and blanket the entire neighborhood. The silver car with the missing cap must rev like a speedster when it is about to be in motion. If anything, it could carry Omar from place to place and satisfy its role as a vehicle.

But the silver car can come out of the driveway and he can feel the rumble. And in his mind, he can pass the grass, the flowers, and the flags. The feel of grass under feet, and the touch of the strong fabric of the flags, and the precious petals of the purple flowers engage all that take in these pieces.

All of these things come together and form the vision of a Delawarean suburbia. But the woman with the orange galoshes and the big black eyes...what was her name?