Rules of the River

by Mary Knutson 10 months ago in travel lists
Report Story

The ups, downs, and side-to-sides of whitewater rafting 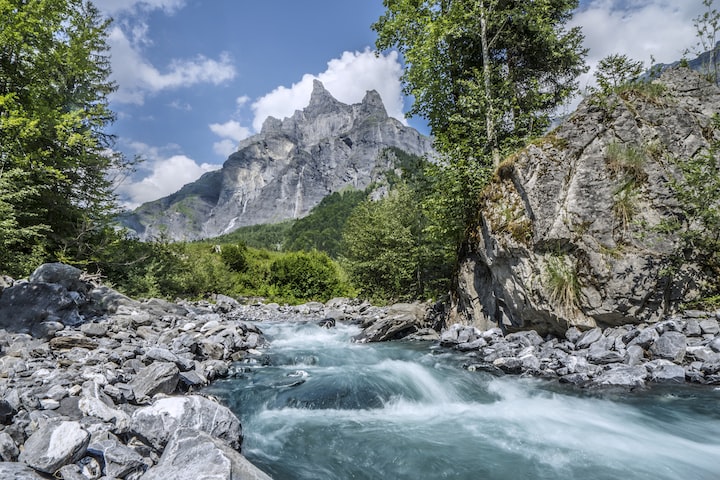 Photo by Luke Vodell on Unsplash

A splash echoed through the mountains. We turned to see a river guide, with several squealing kids on his boat, pull his paddle out of the water. The children followed suit, attacking the water with their paddles as hard as they could, each causing only a miniscule splash.

Our guide, Natalie, explained, “We tell the kids that there are beaver sharks in the water that have to be scared away. But it’s okay, we tell them they only eat toenails so if you trim your toenails you’re safe. But what seven year old does that--so they all freak out.”

Another splash rang out as a guide up ahead scared one of the alleged beaver sharks away. Everyone on our raft laughed as the children squealed in terror and delight.

Farther down the river, our boat was dipping and tilting at every bend and ripple in the river, dodging rocks, and causing us to lean in to avoid falling out. A whistle echoed through the mountains and I turned to see one of our blue rafts floating downstream, empty of passengers.

Of our four guides, it was the rookie’s boat which had taken the brunt of the river's force. As it turned out, the raft hit a rock in and the people on that side were catapulted out of the raft, those on the other side were left in an unbalanced vessel and were dumped ungraciously into the river.

Our guide helped us turn and we paused to make sure everyone was okay and picked up. By the time it was all said and done, the rookie’s boat had 4 people, including himself, while another of our little rafts had twelve. They pulled to the side and got their numbers balanced back out and we were back on course in a matter of minutes.

Almost immediately, we were thrown into another set of rapids, pushing and pulling the raft every which way.

Everyone on our raft leaned forward and pulled the paddles back as hard as we could. The little boat dipped in the water at a sudden drop, water splashed across my face and up my nose. Someone yelled from close behind me.

I turned back and saw a woman on the back of our raft, halfway in the water, trying to get back in the boat. Those next to her helped as best they could, but our guide was nowhere to be seen as our raft continued down the rapids. We looked around the raft and saw her off about twenty feet away floating in the water. Another raft from our group paddled toward her to help but the second she saw them, she set into motion and swam as fast as the river could carry her back to our raft.

Looking back on my life, I don’t remember a single time I’ve seen someone as dedicated to get somewhere as when I saw her swimming towards our raft. We hauled her back in the boat and maneuvered over to get her paddle, everyone laughing--including herself--once she was safe.

“This is called Swimmer’s Stretch right in here,” she grinned as the water smoothed out, “so if you want to get in the water you’re welcome to…it’s very refreshing.”

“Really?” I asked the man next to me, Tom, I think. He responded with a smile and a shrug. I looked around and no one else was getting out of our raft. Two rafts upstream, a guide did a backflip off the boat and another had small, life-vested children jumping out of the boat and into the cool water.

Our guide repeated that we could swim and I looked around, held my nose, and exclaimed “Peace out!” before letting myself fall over the side of the raft. The cool water embraced me with open arms, but as it worked to pull me down with the current, my life jacket worked harder to keep me afloat. I’m not used to life jackets so while it was uncomfortable, the extra support against the unforgiving current was appreciated.

The rookie guide veered his raft toward us and laughed, “Did she tell you what it means since she fell in?”

We all got quiet as anticipation filled the warm, Tennessee air.

“It means she owes us a six pack!” he was brimming with excitement, I couldn't help but laugh at the chaos of it all. “A guide falls in and they owe the others a six pack. And ya know what else? If another guide saves them, that’s another six pack!”

“Yeah, I fall in and owe them a six pack, like, what?” Natalie said with an eye roll, failing to hide a smile.

The rookie laughed, “Yeah, that’s why she started moving as soon as I went toward her.”

Natalie chuckled, “When as I saw you coming, I went ‘nope’ and just started swimming.”

Natalie guided us through the river and past boulders. Downstream we reached a place appropriately named Pinball Alley, our raft bumped off rocks and skimmed the bottom of the shallow, rocky water. We bounced from the back of the raft and approached the rocky bank with the front, back and forth, side to side.

Keeping a keen eye out for wildlife, I checked the rocky banks and came eye to eye with a small brown water snake. I saw the snake, the snake saw me, we were both uncomfortable with the situation. It took all my willpower not to scream and jump away, but doing that would only make matters worse. Then, within a yard of the first, I saw a second snake seeking shelter in the shadow of the rocks and weeds. Remind me to never fall out of a raft in shallow, rocky water.

Rules of the River:

2) Taking someone else’s paddle is okay

3) If someone takes your paddle and throws it upstream, you have to be the one to go get it because your guide warned you in advance

5) Listen to your guide, even the rookie is more experienced than you

More stories from Mary Knutson and writers in Wander and other communities.