by Ryan Frawley 4 months ago in europe

It's the grit that makes the beauty shine.

I don't tell those kinds of stories. You know the ones. The Three Drunk Norwegians. The Narcotrafficantes Who Chased Me Through The Jungle That Time. The Multigenerational Balinese Family Who Taught Me How To Love. Is there any greater bore than a travel bore? I can see myself even now, desperately checking my phone for messages while some pompous narcissist drones on about how in Mongolia, like, everything was like, four-dimensional. They talk about travel broadening the mind, but I see people's focus narrowing constantly, shrinking with every border they cross until every country merges into the others, and all that remains in the bright bare circle of focus is themselves.

So no adventures. No mishaps. I know. You like the narrative. The metronomic propulsion that pulls your hazy attention through the forest of words between blaring notifications from your electronic narcotic of choice. Our brains are attuned to story, wired to spark at the first hint of plot, of intrigue.

That's not life, though.

We try, consciously or not, to experience it that way. But it isn't the truth. Sometimes things happen. Sometimes nothing happens. One means no more than the other, and both mean nothing. B doesn't follow A without our hands to guide it.

Palermo is bursting. With beauty, with colour, with charm, with life. In the crowded markets, you keep your hands in your pockets while traders sing in dialect, and Sicilians push past each other. The Vucciria, Palermo's most famous market, isn't what it was when Guttoso painted it. Now it's mostly Chinese-made tat to swindle tourists. But the name has become a synonym for chaos in Sicily —"this is an absolute Vucciria!"— and a visit to a less well-known market will quickly show you why.

The traders aren't friendly. They aren't delighted to share the produce of the region with you. Here, they don't let you pick your own fruit. Tell them what you want, and they decide what you get. The gorgeous fruit at the front of the stall is only for display. It's not for you. I get it. This isn't a tourist attraction. These people are trying to earn.

Sicily doesn't have the greatest reputation. In Italy's deprived South, the Mezzogiorno, Sicily may be the most deprived place of all. And even though Garibaldi's unification of Italy started here, right in Palermo, many Sicilians don't think of themselves as Italian at all.

I'm not going to pretend that I don't immediately think of the mafia when Sicily is mentioned.

And maybe it's true that as little as twenty years ago, no one even dared speak the word. But that's not true anymore. Bobble-headed figures of Don Corleone sit on the shelves of tacky souvenir shops right next to similar figures of the Pope. This far from Rome, Francis I may as well be a fictional character. But the Godfather is very real.

You can see it in the development boom that has made the outskirts of the city look like a pile of dominoes. Identikit empty buildings stacked up row upon row with no one inside them. You can see it in the hush of the streets away from the tourist areas, where the buildings sag against one another, reeling ruins ready to collapse. You feel it when you spend an hour in a restaurant at dinner time on a weekend, and no other customers come by, as though this isn't a restaurant at all.

You see it in the white-haired man standing all day in the door of an empty cafe in a crisp suit, his overcoat hanging empty-sleeved from his shoulders while he scowls out at the street.

To a Canadian, a Sicilian winter feels like summer.

And I prefer cold weather to crowds. The only English we heard as we walked the streets of Palermo was three young Americans discussing "the most awesome fuckin' pizza, dude" as we passed. We visited a palazzo and paid for a tour to find ourselves the only people on it.

The guide - a charming young man from the North with a mop of unruly black curls and a scattering of facial piercings - told us that Italy is rotten. Corrupt. Jobs are for those with connections, friends of friends. I advised him to marry a Canadian. Italy is shedding its young like a deer shedding its antlers, the South faster than the North. It's exactly these imbalances that brought us here, putting a comfortable Canadian existence on hold to enjoy what a still-rich but struggling economy can offer. Quality of life for a small capital outlay. Paradise at a low, low price. 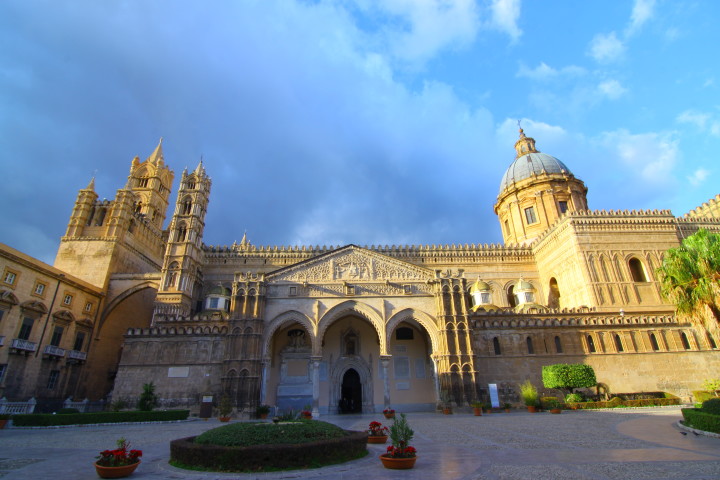 Step into the courtyard that faces the door of Palermo Cathedral, and you enter a different world. The building looks like a monument of an alien civilization, and in a way, that's exactly what it is. The Phoenicians started the building, and they're so far gone in time it's almost like they never existed. The site was developed by Greeks and Romans, Arabs and Normans, changing hands along with the island itself as successive waves of invaders conquered and fled Sicily through the centuries. The result is, for someone who has racked up more miles than most, one of the most beautiful buildings imaginable.

We ate our fruit from the market there, on a stone bench facing the church. The scarred and gnarly Sicilian oranges were the best I've ever tasted.

On our last night in Palermo, we did everything right.

On the hotel's rooftop terrace, we drank sweet wine and watched the sun dip behind the mountains that crowd the city, about to push Palermo into the sea. We wandered to the Teatro Massimo and joined the surging crowd of Sicilians out for their evening stroll. We tucked into tennis-ball-sized arancini and cannoli as long as my hand. And the fractured, crumbling, corrupt city worked its charm on us.

Because we like our beauty scarred. We like our cities to limp. We prefer Naples to Florence and Havana to Barcelona. It's the grit that makes the beauty shine. 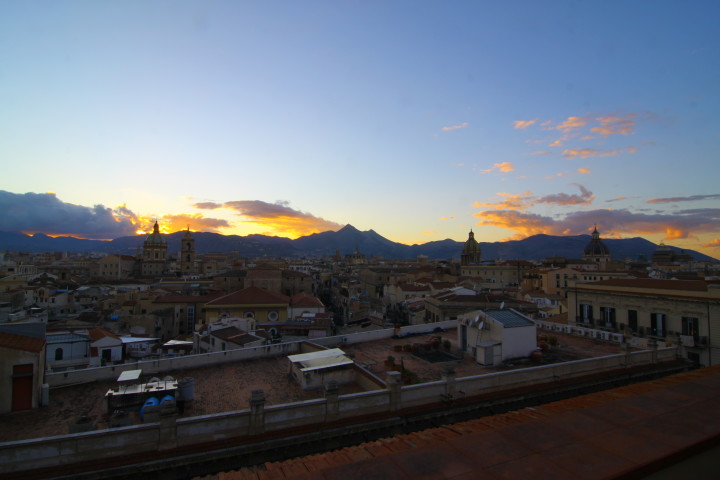