Once Upon a Night at Downtown Toronto

by Nkeonye Judith IZUKA about a month ago in female travel

Not every night is created equally… 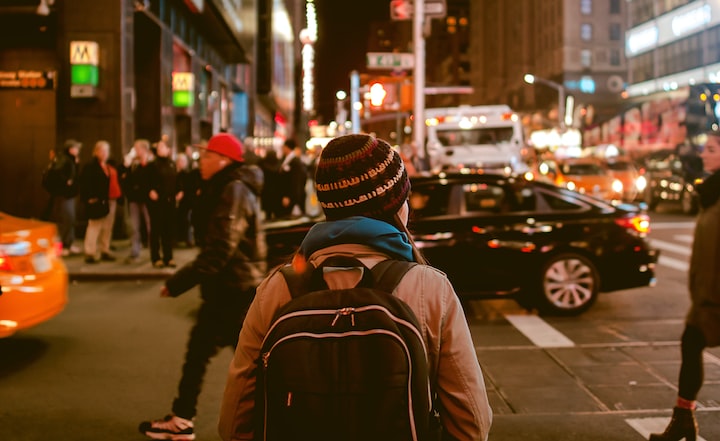 Photo by Anubhav Saxena on Unsplash

I can’t explain what happened to me that night. I had left my place of volunteer a bit later than usual. II made my way back to the bus stop. Weeks before this, I took the tube, and one time, I walked to and fro. I got to the bus stop and saw that the next bus would not be due for one hour so I left. I intended to take the tube but for some reason, could not locate the tube station. I had been walking for about 15 minutes. I remembered seeing streetcars so I decided I would board one of them. Why didn’t I want to walk home? It was for 30 minutes! The week before, those 30 minutes seemed significant as I walked back home. I had picked up a bug and ended up sick in bed for 2 days. On this night, I had exceeded my shift by thirty minutes. The days got darker quickly so I was not going to beat myself up about leaving later than usual.

I hopped up on the streetcar but noticed that the bus stops were unfamiliar. Then I realized I had boarded the wrong streetcar. After moving past two stops, I signaled for the car to stop and got down. I crossed to the other side of the road and walked over to what resembled a bus stop. After about ten minutes, the first streetcar approached but rode past me and my ‘stop’. Another did the same. At that point, I realized I wasn't at an actual stop. I needed to find the nearest 'actual' stop. I walked a couple of blocks ahead. It was dark, lonely, cold, and unfamiliar. I remembered all those strange stories on the news of people being attacked on their way home. I had no intention of being a news item! Eventually, I identified an official stop and then waited. Passengers congregated and they all appeared to be waiting for rides. I knew something must be right after all. After what felt like forever, a streetcar approached. We all got in.

I looked at my GPS for the second time on my lost journey and noted how many stops I had to my destination. Google map signaled that it was a 25-minute ride. Soon enough, the streetcar arrived at my destination. I signaled to stop again and got off. The GPS specified that I would home after 10 minutes walk. I shrugged my shoulder and embarked on this bit of the journey. This was familiar territory and hopefully the end of my night of horror. As I walked and passed street after street, I wondered why 10 minutes was beginning to feel like 25 minutes. I also noticed that these were not familiar streets I passed on my way home. I fumbled in my pocket for my phone to look at the GPS. It stated I was 22 minutes from home. How on earth did 10 minutes become 22 minutes?

I looked up at the stars and wondered who I had offended. Did someone curse me? I was speechless, sad, cold and my legs were killing me. Yes, I had layered up in readiness for the night but nothing beats real warmth. I clicked on the navigator and it spoke to me as I changed direction. From not wanting to walk 30 minutes home, I had spent roughly 2 hours wandering downtown Toronto. Catching a bug or covid-19 seemed a non-issue! I just wanted to get home and get warm.

Alas, the GPS signaled to me familiar street names. I looked around and I recognized landmarks. I could see my home in front of me. Oh, was I glad! I knew my housemates would ask questions. We were supposed to have popcorn night. I was due back hours ago. I hadn't mentioned multiple stops. I only stated I was going for volunteering. Heaven knew I was in no explanation mode. When would I finish the story of missed tube stations, wrong streetcars, and strange bus stops? I was completely exhausted. I’ll offer a simple explanation and that would be the end, [hopefully]. I walked in and yes, they were in the kitchen chilling with wine and popcorn. “Babe, what happened to you?” “I lost my way home, I need a warm bath.”