by George Karouzakis 13 days ago in humanity

An emotional approach to the French capital 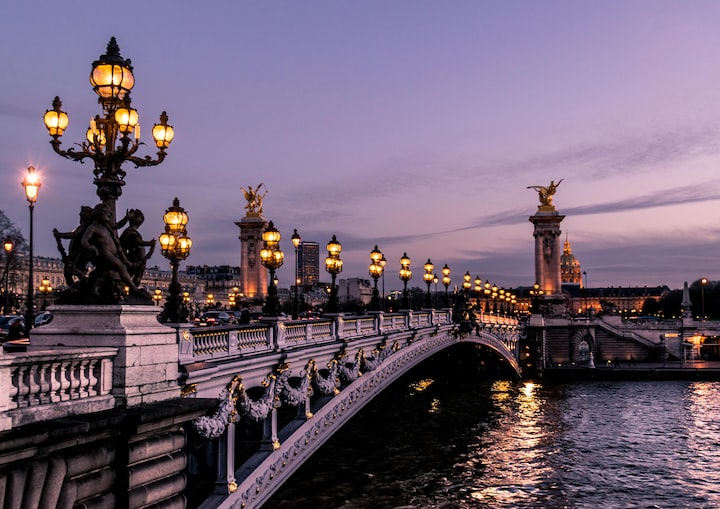 Photo by Léonard Cotte on Unsplash

Paris is the beloved city of thousands of people around the world. It is a city that is associated with memories, love, vacations, and the education of people from various backgrounds. It is also geographically a place of freedom. Furthermore, it is no coincidence that, for decades, many persecuted people who manage to escape the dictatorial and totalitarian regimes of their countries have often chosen Paris as a safe haven.

The exiled Spaniards from the time of the civil war in their country, the Greek refugees from the Papadopoulos dictatorship, emigrants from the countries of the former Eastern Bloc, and many others have found a piece of free heaven in the City of Light.

For me, who am neither a refugee nor an exile, it is the city of my studies. I always think of it with great love and a feeling of gratitude because it welcomed me to complete my education. Although I am not a French citizen, I appreciate without hesitation the care and generosity with which the French have integrated me into their universities as an equal citizen.

During my years of studying, I never felt like a stranger in an inhospitable land, but rather like a member of a larger community with French as our common code of communication. Gradually, without realizing it, Paris, and therefore France, became personified by me: The country evolved into a fluid, a rather maternal figure with indeterminate but positive qualities.

She was constantly by my side in the streets, in the cafés, on my walks in the Place de la Bastille, in the bookshops of Saint-Germain-des-Prés, in the swimming pools and parks of Paris. I also carry her with me to Athens, wherever I am.

This figure (a guardian angel with the characteristics of an indefinable French spirit?) has always established certain rules, a measure that has quietly but effectively shaped my relationship with the world. Put more simply, with this imaginary figure, I have learned not to be afraid to think freely.

You only have to read a few lines of Baudelaire's poetry to understand what freedom and expression mean.

Freedom instead of vulgar expression

Let me make it clear that by "free thought" I do not mean the ability to say whatever comes to mind unfiltered and without any argument. Quite the opposite. To think freely means that I have sharpened my ability. I have the tools to express myself as clearly as possible, without fear, but with arguments.

The hubbub, the shouting, the swearing, the barrage of bias and information on social media has nothing to do with the gift of free speech. But only with the venting, the rage, and the fury of the most unpolished expression of human nature.

The idea of freedom to express my thoughts, to respect the dissenting opinions and nature of my fellow men, was obviously not born in Paris. The city's environment and my contact with the university community fostered its development. Who tells you that the spirit of the Enlightenment is no longer alive in this city?

What I write here may seem to some to be the construction of a purely personal emotional scheme, an attempt to give human and moral qualities to the confused idea of a city. They may be right. That was my first thought, and I agree with you in part.

But this emotional or impulsive situation has helped me to improve, to fit better into the human community. So, if this "construct" doesn't harm anyone else and benefits me psychologically, I can't be mercilessly cruel to it.

But how are impressions and prejudices about a city formed? What elements make Paris a city that so strongly influences the perceptions of different people in the world?

It is not easy, as you can understand, to analyze each case individually. But I can give you an insight into my own emotional and physical relationship with the city.

My relationship with Paris has existed for more than 15 years and has been shaped by the materials of reality, by emotions, by images, by experiences, and by human contacts.

Over the years, I have seen the city from many perspectives: from the comfort of the luxury hotels in the Arc de Triomphe district to the "notorious" neighborhoods of the Barbès district. I have lived or stayed in solitary lofts and student rooms of a few square meters, but also in elegant houses of several square meters.

I have experienced first-hand the glamour of the French capital, known worldwide from the cinema and more recently from Instagram pictures, but also its darker side. In the summer of 2010, for example, when I lived for a short time in an apartment in Barbès, every day when I went to the bakery to buy bread, I saw the gang-like brawls of drug dealers among the passers-by.

Paris is composed of disparate ingredients: wealth and poverty, freedom and sadness, sunny days and rainy seasons, the exquisite aromas of flowering gardens, and alleys reeking of piss and spilled beer.

It is a living city, made up of the materials and attitudes of its inhabitants.

If someone asked me to sum up Paris in a few sentences, I would recall the view of the Opéra Garnier from the height of my bicycle, a party on the terrace of the Palais de Tokyo overlooking the illuminated Eiffel Tower, my reading in the quiet surroundings of a library, Jacques Brel's photo in a café in Montmartre.

The most precious image, or rather feeling, of Paris for me is the moment of dusk in the spring city: when the faint natural light recedes and mixes with the city lights that greet the night. That's when an eerie, borderline feeling sets in, between melancholy and euphoria. This rift between day and night, light and darkness, reality and myth, joy and sadness is my favorite in Paris.

See all posts by George Karouzakis →