My Adventure in Greece Part II 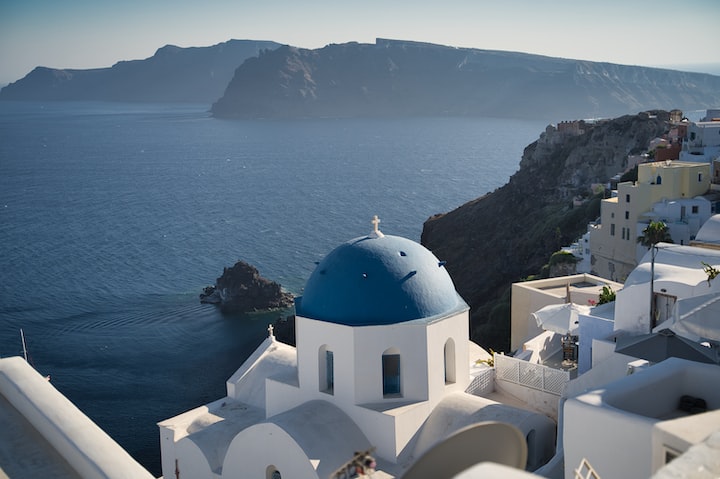 Ten years after my Greek adventure/misadventure, I had the chance to go back for a conference. The conference was scheduled to take place at Souda Bay on the Greek Island of Crete. I scheduled my flight through the military travel system, and the conference organizers made the hotel reservation located in the city of Chania. Everything was set, and I promised myself not to lose my passport this time around and not forget to grab the hotel's business card so that I would not get lost again.

My flight from the U.S. to Athens, Greece, went smoothly, and I transitioned from the international terminal to the domestic terminal to catch my flight to Crete. I knew that my next flight would be on a smaller plane and was not surprised when the transportation bus took me to a small twin-engine puddle jumper. My seat was the window seat at the back of the aircraft, and once I sat down, I studied the map of my expected route. Based on the map, I expected the flight to head south of Athens across the Mediterranean Sea towards Crete. When the flight took off, I watched the terrain from my window and matched it with the map I had with me. As the plane neared the sea, I expected to see land disappear as it made its way to Crete; however, I noticed that the aircraft followed the coastline in a southwest direction. I figured that the flight route was going towards the ancient city of Sparta, cross a reasonably sized island, and then head out across the sea to the final destination in Crete.

I watched as the plane began to turn towards Crete's direction and thought the plane would gain altitude to gain speed. Instead, the aircraft was reducing speed and flying lower to the ground. As I looked out the window, it appeared the plane was preparing for a landing. I was confused and thought maybe I read the terrain and the map wrong. I hoped my instincts were wrong and that I was actually landing in Crete and would be on my way to my hotel shortly. When the plane landed, and I got off, I noticed that airport seemed smaller than I expected. When I walked inside the arrival terminal, I looked up at the map of the Island that said, "Welcome to Kythera," and realized that I was not on the Island of Crete. I quickly went between the door connecting the arrival and departure terminal and asked the person at the desk that I needed a flight back to Athens because I was supposed to be in Crete. The lady looked puzzled and said the only flight back to Athens was the one loading now, and it was booked. I asked her when the next flight to Athens was scheduled, and she replied that it was scheduled for the following afternoon. The lady at the counter informed me that there was only one flight per day into Kythera and that I would have to return the next day to see if there were any openings. I asked her if there were any other options, and she said there was a ferry that went between Kythera and Crete and its next scheduled departure was the following night. She recommended I get a hotel room near the port where the ferry departed and come back the following day to see if I could get a flight back to Athens. If a flight back to Athens was not possible, then I could take the ferry that evening.

As my misadventure began to sink in, a gentleman approached and offered to let me sign for a rental vehicle. He listened to my conversation with the lady at the counter from his desk and offered to help. He provided me a rental for only 40 Euros. The car would help me find a hotel by the port, and I agreed to return it the following day when I either flew back to Athens or hired a taxi to take me to the ferry ship for my voyage across the Mediterranean Sea.

I drove away from the airport and made my way to the seaport. As I drove, I noticed that the terrain was mountainous and desert-like. I drove along the edge of a mountain and could see the water below and finally made my way down a steep road that led to the seaport town of Diakofti. I booked a room and called my office. My fellow Iron Major picked up the phone, and I informed him that I landed on the wrong Greek Island and that I was working on getting to Crete the following day. There was a moment of silence followed by the expected laughter on the other end. He put me in touch with my administrative sergeant, who helped me get authorizations to purchase new tickets while chuckling the entire time. After the phone call, I walked down towards the water to grab dinner. I wanted to the port where I would catch the ferry to Crete. When I got to the harbor, my confidence sank. Inside the harbor was a sunken ship sticking out of the water.

As I walked around the area, I noticed many of the resorts and restaurants seemed empty. There were a few tourists along the beach, but the area was not crowded. I walked into one place hoping to order some authentic Greek food, and instead, they only offered hamburgers and fries. I did not get lost on the wrong Greek Island for a hamburger, so I tried another spot. The next place only offered Italian-style meals, so I settled for spaghetti and ordered a Mythos beer as a consolation prize. As I ate on the walkway next to the beach, I noticed the island was full of cats, and there was a pack of them staring at me as I ate.

After I finished dinner, I decided to drive around the island before sunset. I drove north of the airport, looking for the Kythera Castle and other locations throughout the area. The Island was small but nice. There were a lot of small villages throughout, but I noticed a lot of places seemed empty. The summer tourism season had ended, and a lot of people had left the Island. I returned to the hotel, planning to be up early in the morning to see if I would get lucky with a flight back to Athens.

The following morning, I woke up early and went for a morning jog down to the harbor and ran up and down the hilly roads. After the run, I went back to shower, pack, and get breakfast. The hotel offered a sizeable buffet-style brunch with all sorts of Greek foods and pastries. When I finished breakfast, I departed for the airport. When I arrived, the same lady was at the counter and called me over. She took me into an office where she made a few phone calls with the Greek airlines and secured me a flight. That afternoon, I flew back to Athens and then took a second flight to Crete. I arrived at my hotel in Chania just in time to join my conference group for dinner on a pirate ship in the harbor.

The city and harbor in Chania is a beautiful spot where someone could spend hours walking around and enjoy the variety of eateries and shopping. Chania is an old city with lots of history. The city was influenced by the Venetians and Ottoman Turks where you can see a Mosque near the harbor. During my two nights in Chania, I took every opportunity to walk around and explore.

I departed Chania and flew back to Athens. My layover in Athens was several hours long, so I took the opportunity to leave the airport and head back to the Acropolis that I had visited ten years earlier. This time I knew my way around and quickly reached the top to take photos to share with my wife when I got home.

My second Greek adventure ended, and when I returned to work, my coworkers would not let me forget that I got lost on the wrong Island. At the same time, I considered getting lost on the wrong Greek island a blessing because I came across a beautiful area I would not have seen otherwise. I also enjoyed my time in Crete and looked forward to visiting again with my family. Hopefully, the third visit to Greece will be the charm where I will have more adventures than misadventures.

See all posts by Chad Pillai →