My Adventure in Greece Part I

by Chad Pillai 3 days ago in europe 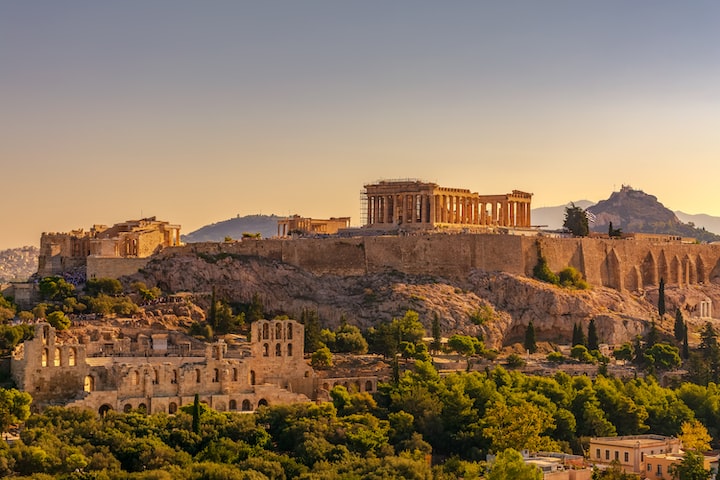 Photo by Constantinos Kollias on Unsplash

One of the Army's benefits is being stationed in Germany, where travel throughout Europe is cheap and convenient due to the mass transportation options. When I had a long weekend, I took every opportunity to travel, and in 2005, I made a trip to Athens, Greece. After reading about Greek mythology, studying Alexander the Great's exploits, and saw the Elgin Marbles in London, I always wanted to visit Greece.

On the day I flew to Greece from Germany, my flight was delayed, which caused a cascading effect of misadventures. I landed in Athens after midnight, and the hotel that I originally booked was closed. I called a hotel booking service at the airport and was given a recommended hotel open late with vacancies. During the cab ride from the airport, I observed the landmarks along the route. One landmark that stood out to me was a Pizza Hut along a major road which would prove crucial the following day.

I arrived at my hotel, and in a hurry, I grabbed my bags to check-in. As I checked in, the hotel clerk asked for my passport, and I searched my pockets for it only to realize it was missing. In an instant, I realized my passport slipped out of my pocket in the cab, and before I could turn and get it, the taxi sped away. Thankfully, the hotel clerk understood my predicament and suggested that I get a replacement passport at the U.S. Embassy in the morning.

That morning, I woke up early to go to the U.S. Embassy. The hotel clerk called for a cab to the Embassy and promised he would contact the cab company from the night before to see if my passport was found in the vehicle. As I left the hotel, I made the mistake of not grabbing the hotel's business card with the address and phone number. This mistake would cause me a headache later in the day.

I arrived at the Embassy and explained my situation to the consulate office. Usually, there is no guarantee that the Embassy will provide you a new passport on the spot, but I had two trump cards in my pocket. First, I had a military identification card and a pass form that meant I had to leave Athens by a specific date. Second, I interned at the U.S. Embassy in London while in college and knew the Embassy maintained passports for emergency purposes. I paid my $90 fee and was out of the Embassy in less than two hours.

When I left the Embassy, I thought I had a fair good sense of where I was in the city and where I needed to go. My main goal was to visit the Athenian Acropolis, where the Parthenon was located. As I casually walked down the road away from the Embassy, I saw what looked like Greek ruins atop a hill. It was early, and I had not eaten or had morning coffee yet, so I mistook what I saw for the Acropolis. I walked up the Lycabettus Hill, along a winding road to the top. When I got to the top, I realized my navigational skills were off. From the top of the hill, I could see across the city and viewed the Acropolis across the city. Not wanting to accept defeat, I walked down the hill, found the nearest metro station, and took it to the Acropolis station. The biggest challenge I had navigating was my false assumptions that there would be signs in English for tourists since the Olympics were held a year before.

I finally made it to the Acropolis, and I hiked up the hill to see the Parthenon. There is a small fee required to enter the grounds for those that have not been there, and folks can sign up for guided tours. I paid the fee but opted out of the guided tour. I made my way up to the ruins and was amazed at the sites. Despite being in ruins, the Parthenon and other surrounding marble buildings were a fantastic testament to the ingenuity of the ancient Greeks. I took plenty of pictures and then planned to make my way back to my hotel. I departed the Acropolis and began walking around the city when I realized I had no clue where my hotel was located.

I realized my error in not grabbing a business card to give it to a taxi driver. Since all the signs were literally in Greek, I had no reference points to guide myself back to the hotel. I opted to find a major road and see if I could remember any landmark I had seen from the airport or my trip to the U.S. Embassy. The only reference I had was my belief that my hotel's name started with a “K”, and I remembered a Pizza Hut along the way. I walked around the city for what seemed like hours and eventually came across the Pizza Hut I had seen the previous night. I went to a newsstand and purchased a map of Athens, hoping it would help me. I also came across some Greek police officers and asked for help, but they were unsure what hotel I was looking to find.

I continued walking around Athens with a map, hoping to find my hotel. Suddenly, an older gentleman asked me something in Greek that forced me to reply in English that I did not understand him. He smiled and responded in English that I looked lost. I told him that I was indeed lost and that I could not find my hotel. I explained that I believed its name started with a “K”, and I remember the Pizza Hut landmark on my in from the airport. The older gentleman stated he thought he knew which hotel I was looking for and told me to follow him. We boarded a city bus and, within five minutes, arrived at a square where my hotel was located on the backside. I thanked the gentleman for his help and paid him ten euros for his trouble.

When I arrived at my hotel, the same hotel clerk who gave me the information about the U.S. Embassy informed me that the taxi company found my passport. He asked me if I wanted them to return it, and I replied that I did want it back. The clerk said that I would be expected to tip when the taxi driver returns the passport. I asked him how much and he replied that I should tip around 50 Euros. That was more than my cab fare the night before, but I figured that was the price I paid for recovering my passport. The taxi driver arrived about twenty minutes later, and I recovered my old passport. Since I received a new passport from the Embassy, my old one was useless, but I wanted to control possession of it if it was used for nefarious purposes.

After I recovered my passport, I went back to my room for a shower before I went out looking for dinner. Before I left the hotel, I grabbed a business card to avoid the mistake from earlier. As I walked out the main square to the main roadway, I looked to my right. I could not believe it. From where I stood, I was looking up at the Acropolis. I had spent hours lost looking for my hotel only to realize it was located in the footsteps of the Acropolis.

I enjoyed dinner that night and flew back to Germany the following day. I learned valuable lessons about not losing your passport, taking your hotel's business cards, and keep track of key landmarks in a foreign city.

Ten years later, I returned to Greece for another adventure/misadventure that I will share in part two.

See all posts by Chad Pillai →