by Crystal A. Walker 2 months ago in europe
Report Story

These are the strange things I'm learning about before I explore "The Big Smog." 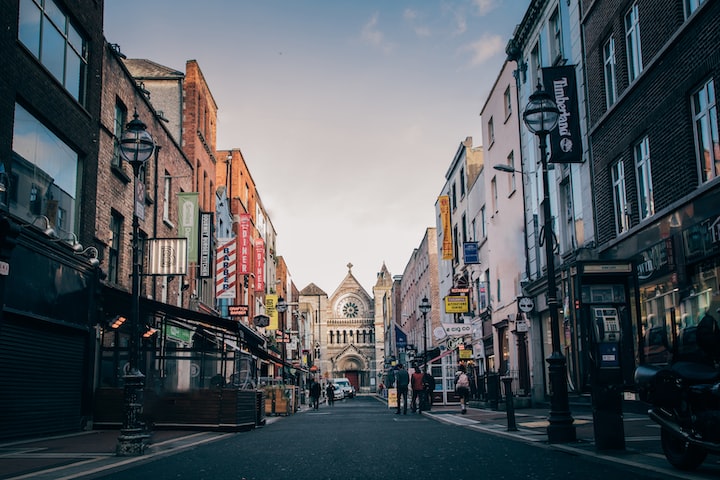 Photo by Gregory DALLEAU on Unsplash

I'm about to embark on a 10-day trip to the Emerald Isle, and I'm counting the days! Like the geeky and adventurous tourist that I am, I enjoy doing more than the "typical" research before I go.

Yeah, yeah. I'll look into the tastiest food joints, pubs to crawl, and where to take the best selfies. However, I want to learn more about the strange, unusual, and odd facts many tourists might overlook. Other than the return flight home that sets me in a mood of sadness, the feeling amplifies when I learn about something after my departure, and my inner voice says, I wish I got to see that before I left!

The additional motivation I have to research as much as I can before taking off is that I want to ensure that I keep my guide on his/her toes, as I find this most directly affects the amount of the tip I leave them. Also, I'm just weird and like to know funky stuff.

For example, the first tidbit of information is that Dublin has several nicknames. "The Big Smog" seems to be one of the most popular nicknames in my internet search, but others include The Dubs, The Big Smoke, and The Pale, to name a few. If you're from Dublin, let me know which one you hear most often and prefer!

After a quick jet-lagged nap, I have a choice of St. Patrick's Cathedral or going on a walking tour of Grafton Street, River Liffey, and St. Stephen's Green. After touring the Vatican in Rome, I (personally) find that it's not easy to top, so I opted for the latter. So far, my little bit of research has already proved to be enlightening!

One of the most infamous executions was with a brothel keeper and serial killer accused of witchcraft and satanic rituals named Dorcas "Darkey" Kelly. When looking at the history of Darkey Kelly, a lot is unknown. Some proclaim that the stories are embellished, while others say that the charges against her couldn't be proven. Regardless, one thing is for sure: Her death ended in a brutal execution. According to one report, Darkey Kelly was burnt alive on The Green in 1761, while other reports indicate she was partially hung before being burnt at the stake on Baggot Street. However, I find that it's possible that both happened after reading a quote by Edward Cave, who paints a gruesome picture of what the execution was like for Elizabeth Herring at Tyburn, London in 1773, who states:

"She was placed on a stool something more than two feet high, and, a chain being placed under her arms, the rope around her neck was made fast to two spikes, which, being driven through a post against which she stood, when her devotions were ended, the stool was taken from under her, and she was soon strangled. When she had hung about fifteen minutes, the rope was burnt, and she sunk till the chain supported her, forcing her hands up to a level with her face, and the flame being furious, she was soon consumed."

Seeing that she has an interesting place in Dublin's history, you can count on me having a drink at Darkey Kelly's Bar and Restaurant.

To my surprise, on the west side of Dublin is the site of the largest Viking cemetery outside Scandinavia! Being blessed with the opportunity to live in Iceland for three years, I greatly appreciate the Viking culture, so to hear this is amazing. However, I wondered, "Why is there such a large connection to the Vikings in Dublin?"

Looking at the beginnings of Dublin, it was founded by the Vikings in the 9th century and was named "Norse Kingdom of Dublin."

During the 800s, Ireland had its first Viking Age.

At the time and later into the 11th century, Duibhlinn became a vital settlement and market for shipbuilding, barrel-making, and metal work. After reading more about the Viking's establishment in Ireland, it makes a lot more sense how this cemetery came to be.

It's difficult to Google "Dublin" and not (eventually) run across the name "Guinness," but did you know the factory is on a 9.000-year lease?! As a prior renter, I can't fathom staying at a property longer than 24 months, so to see a 9,000-year lease blows my mind.

How does a World-Famous Brewery acquire a 9,000-year lease?

In 1759, Arthur Guinness signed a lease for the St. James's Gate Brewery, Dublin for 9,000 years at an annual rent of £45. It was located on a humble four acres, had little distillery equipment, and was mostly disused. However, in ten years, he soon started to export his beer to England then it blossomed from there.

Considering the Guinness brand is worth nearly 4 billion USD today, I'd say Arthur made a superb business decision that reaches the level of "Well F*ckin' Played."

Although I'm more of a wino than a beer drinker, you can still count on me stopping by to tribute...and buy my husband a souvenir.

Like me, you might be surprised to see the words "Dracula" and "Ireland" in the same sentence, but it appears that this World Famous Vampire originated in Dublin. That's right! He didn't arise in Transylvania (today Romania), making Dracula an Irishman!

Before you burn me at the stake in St. Stephen's Green, please let me elaborate: Brams Stoker (the author of Dracula) was a Dubliner! According to this article, many of the sites around the city served as inspiration, while this one suggests that Irish folklore played a significant part as Brams Stoker had never been to Romania.

As a book nerd, this is a fantastic tidbit to read and to understand the history of Dracula himself. Holy Moly!

For me, this is an added feather in my hat and another file in my brain's dusty file cabinet labeled "Vampire Info." Why do I have such a file? Well, I'm a lover of New Orleans, and NOLA is the home of the first account of vampirism in the United States with the legendary story of "The Casket Girls." New Orleans is also an iconic backdrop for Anne Rice's Interview with a Vampire, so to connect a place so far away to another so close to home means a lot to me.

So, if you're a bookworm like me, this library is a quasi-paradise!

These five locations scratch the surface of the exciting locations around Dublin, making me sad that I am not staying longer than a few days. That's okay, though, because I must make sure I return!

To get a sneak peek of my Irish Adventure, follow me on my Instagram where you can count on seeing lots and lots of pictures! I look forward to each moment and writing about my experience upon my return.

If you like this story, consider giving these articles a read! 👇

Hearts ❤️ and tips ️💸 are always welcome and much appreciated as they help support my writing! 🙏

You can find all of my articles on my blog as well on Medium where I'm most active in Humor, Lifestyle, and Travel. I've self-published one fantasy fiction with the sequel in the works.

More stories from Crystal A. Walker and writers in Wander and other communities.