by Matt Legg 22 days ago in solo travel

Being alone on an island forced me to grow up. 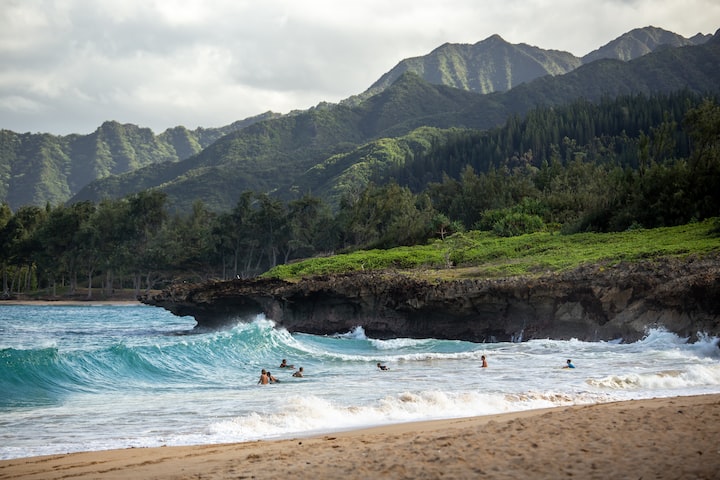 Photo by Luke McKeown on Unsplash

While I sat in the airport terminal looking out the window I was calm and at peace. I was about to board a plane for Hawaii with little money, no job, and nowhere to live, none of that worried me. It was an odd feeling because it was obviously a risky idea but there was an unyielding calm that kept me relaxed.

I had the beginning of a plan, I would travel from the airport to a house with a room for rent I found online. After securing a place to live I would canvas the local area in search of a job in a restaurant. I had been working in kitchens for 12 years and had used this profession to move from Florida to Colorado to California; I’m sure ill be able to do it again.

The flight was rather uneventful aside from the guy sitting next to me. He looked to be about my age, he was cleaner than me, and he was more stylish and cool, but nice. He started the conversation and it began with small talk. Once I told him what I was doing he started giving me some tips and pointers. At this point I am feeling even more confident in my decision, everything will work out.

Upon landing I said goodbye to my new friend and we went our separate ways. I called a Taxi and went to the house I found online.

While we were driving on the freeway I was able to see parts of the island. It was different than I expected, everything looked fairly normal and familiar. As we continued to drive the size of the island began to dawn on me, this rock was a lot bigger than I thought. This was only a problem because the fare on the taxi continued to climb. I tried not to worry about it but I couldn't help but watch in horror as the fair went over $50.

We finally arrived at the house with a total fair of $65, this might seem like much but at the time that was about 15% of my total net worth. It's ok ill find a job and start working right away. After meeting one of the potential roommates and seeing around the house I was ready to move in. Lindsay, the roommate, said they had a few other people looking at the room and they would get back to me on Saturday.

I told Lindsay that I had just come here and had planned on staying there that night. She said she would talk to her other roommate and get back to me. At that point, there wasn’t much else to do, so I started to look for a job.

I checked my phone for all the restaurants in the area, I had a stack of resumes I had printed before I left the mainland. With my backpack and one suitcase, which contained all of my earthly possessions, I began to walk around looking for a job. When I got to the first location I start walking around and don’t see anything that looks remotely like a restaurant. I was unaware at the time, but I was on the campus of a community college that was on summer break, which is why there was no one there.

It was hot, the sun beat down unrelentingly, as I walked the hilly terrain with all of my bags I was drenched in sweat and exhausted. I stood in the parking look of that empty school and checked my phone again, there were no restaurants anywhere near me. I didn't know what to do, nowhere to live, no job, and not enough money to rent a room for the night and still afford to rent somewhere.

As I stood with my heavy bags in the blazing sun I asked myself for the first time, was this a huge mistake?

I was on an island in the middle of the pacific ocean, alone, with almost no money and no direction. After a few minutes of useless worry, I decided I had to do something. I would walk to the nearest place that had restaurants and apply for a job.

All of a sudden it accrued to me, if I don’t get this house I might have to rent a place somewhere else. How would I get to work here if I lived on a different part of the island?

I didn't have a choice, so I started walking.

There were a few potential restaurants not that far away. However since I didn't know where I was or where to go I ended ups taking the longest way possible, still carrying all of my possessions.

When I had finally reached the shopping mall I saw on the map I was excited. Although I was drenched in sweat and my hair was a mess, I was determined to make a good impression and land a job today. The first place I went to was a bakery, I didn't have any baking experience at that point but I was willing to learn. The owner and employees were all Japanese and they didn't speak English that well. They politely told me they weren’t hiring, this wasn’t too bad, after all, I didn't have any experience so I wasn’t surprised. There was a small restaurant directly across from the bakery so I went in there next. This place was also owned by Japanese people who didn't speak English and didn't need help.

At this point I because even more worried, not only are they not hiring but if these places don’t space English I won’t be able to communicate with them. This is something I didn’t have to think about when moving states on the mainland.

As I continued to walk around the mall I found Chilis. This was like a beacon of light for me, I know they speak English at Chilis. I went in and applied and spoke with the kitchen manager. The interview went well, but when we were done she said she had to talk to the general manager before making any decisions and would get back to me. At this point, I was really worried. I didn't know what to do next.

There was a Whole Foods nearby so I went in there to buy a few groceries to eat. I knew this was risky because the prices at Whole Foods are kind of high, but Whole Foods in Hawaii is different. By different, I mean even more expensive than usual. My stomach dropped when I saw the prices, I had to be very careful how I spend my money. I did my best to get food that would be filling and healthy and could be eaten without cooking since I might be homeless for a couple of days.

As I’m shopping I get a phone call. The general manager at Chilis saw my application and asked if I could come back for another interview. This interview also went well and she offered me the job. I would start next week. I was happy and thanked her and went back to my shopping.

The fact that I had a job lined up made me feel better, but the fact that I was potentially homeless was still weighing heavy on my mind. After buying some food I sat at a table and ate while scrolling my phone for rooms for rent, hoping to find another place before sundown. As I was looking at the ads on craigslist I got a text from Lindsay. She said she talked to her roommate and they got a good vibe from me so they were going to rent me the room. Their friend was moving out that day and as soon as he was gone I could move in.

At this point, I was stoked. I now had a job and a place to live, things were looking up. As I walked back to the house the sun was still hot and my bags were still heavy. Despite taking a short break and eating some food I was worn out. I was walking up an incredibly steep hill sweating and feeling pretty miserable at this point. The road up to the house was very steep, it seemed like all of the streets were uphill somehow. It has hard to walk and I was starting to lose it.

The only thing that kept me sane was the fact I was almost there, it was almost over. It made me think about how many times that happens in life. When things are bad and all we see are problems; the solution could be at the top of that hill if we just keep going.

When I finally reached the street I made my way to the house and went inside. The guy who was moving out was just removing the last of his things. Once he was out I moved my stuff in and took a shower. This was one of the most refreshing showers of my life. Not only because I was so tired and sweaty but also because I was showering in my house in Hawaii. It had happened, I moved to Hawaii with nothing and now I live here. I knew there was nothing to worry about.

Receive stories by Matt Legg in your feed
Matt Legg
Read next: The Time I Uttered What I Thought Were to Be My Last Words