by Mireia Prats 21 days ago in europe

Travelling by train is my second best choice of public transport. My first one is the tram, but that’s another story. Two days ago, I took an early train from cloudy Edinburgh and in 86 minutes, I magically landed in England. Sunny Newcastle upon Tyne, to be exact. I had pinned on GoogleMaps several places I didn’t want to miss, but I also left some room for improvisation. 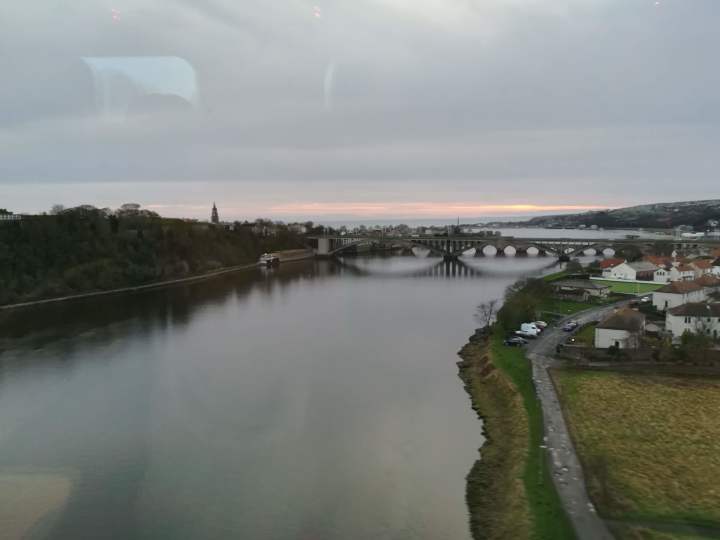 Berwick-upon-Tweed from the train

As I started walking towards the Castle, for a moment I thought I was in Terrassa, a city in Catalonia which had a strong textile industry and still has lots of old factories scattered around, with its typical red bricks. In the English city, those old and gigantic red-brick buildings that used to be factories, horse and carriage auction houses or flour mills were now turned into art studios, architecture offices or museums, just to name a few. 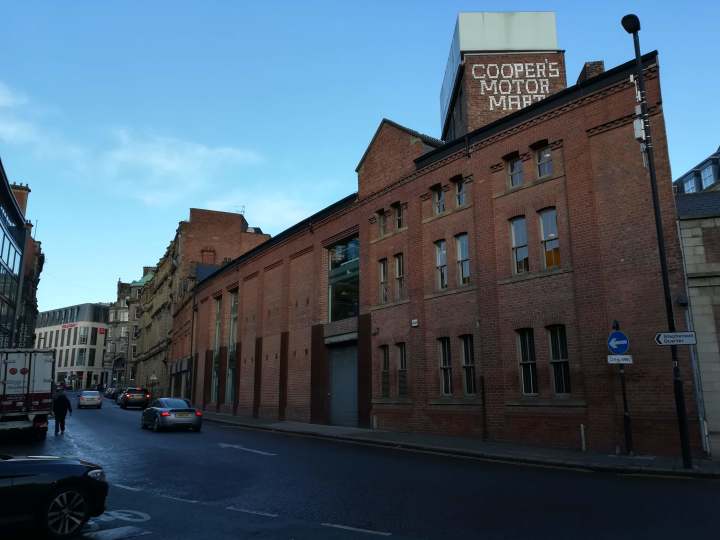 Some of those buildings had massive glass windows which meant you could witness a business meeting while you’re casually walking your dog in your yoga outfit (and even help them brainstorm some fresh ideas!). I wonder if that causes unnecessary distractions, maybe curtains were out of the budget or is it all a brand awareness strategy? Opinions welcome.

The Castle was small but cute. I am just not so sure what Neptune would think of his pillar that rests horizontally in front of the Castle. The original used to be part of the Roman bridge of Pons Aelius back in 1875, and after falling into the river, is now safe in the Great North Museum. 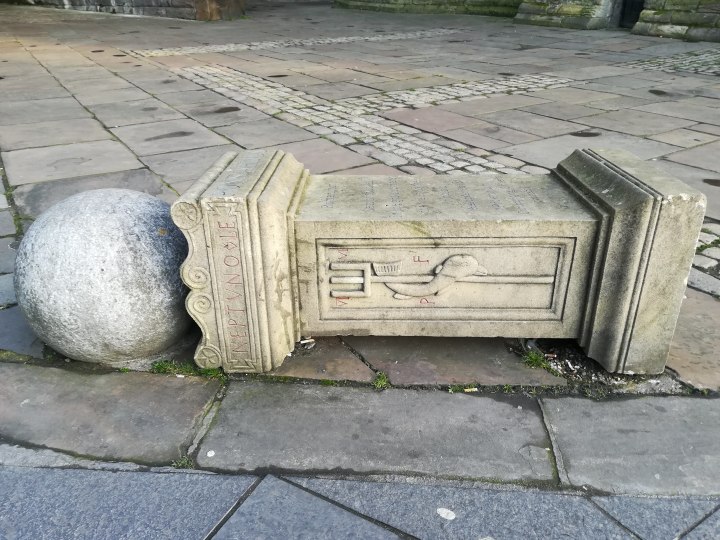 The replica of the pilar resting "peacefully" 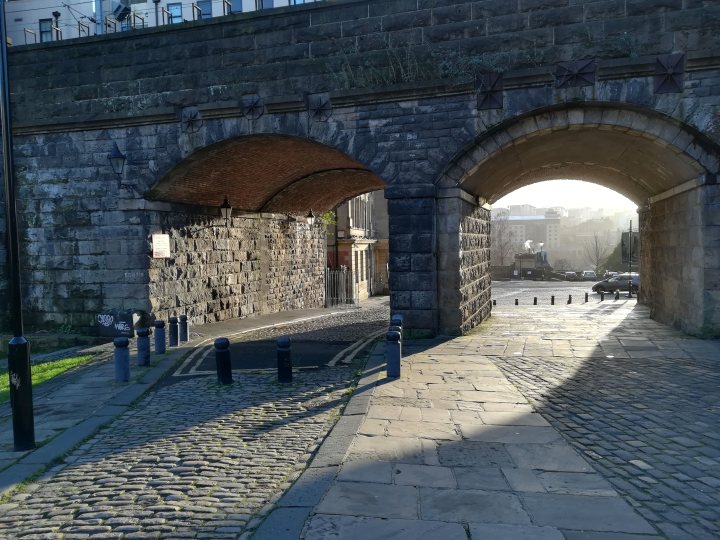 Suddenly I feel like in "Peaky Blinders". Where's Tommy?

A few meters away from the holy Amen Corner, I saw the majestic Cathedral Church of St. Nicholas. It displayed beautiful stained glass creations and lots of old British flags, including the British Legion Women’s section’s one. There was also a memorial for the Danish sailors who died during WW2 with a powerful quote:

“When you read their names remember that they died for Denmark. They died for freedom, so that we like them might live as free danes”. 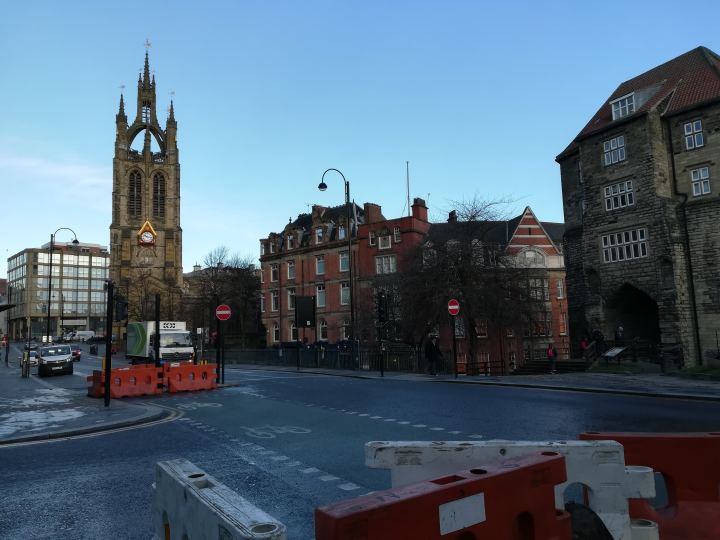 The Cathedral Church of St. Nicholas (left) and The Black Gate (right), the principal gate to the castle

I’ve already mentioned a few buildings, but I’ll insist. I found the architecture in Newcastle fascinating and diverse, showcasing a clash of styles, colours and shapes. Old and new had no problems sharing walls. 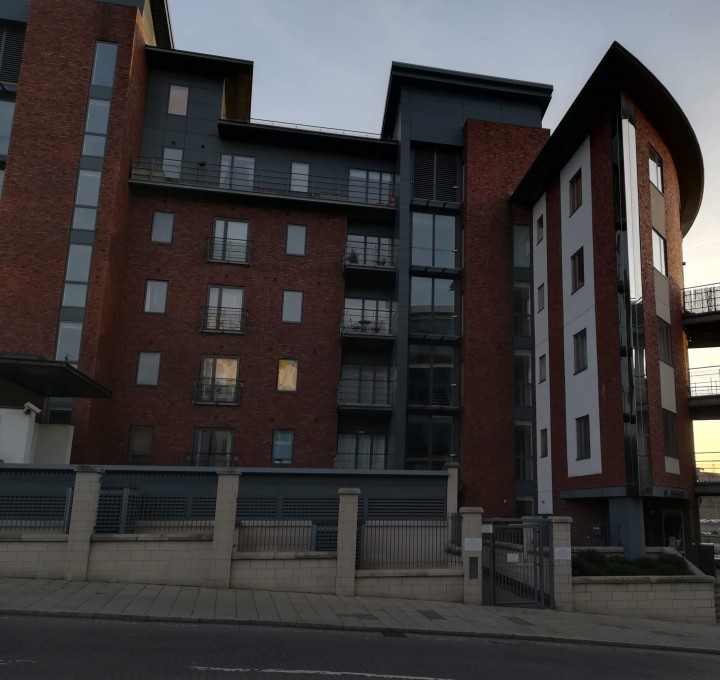 How much furniture did they need to cut in half? Apparently, somewhere inside this building, there's the Crown Prosecution Service. 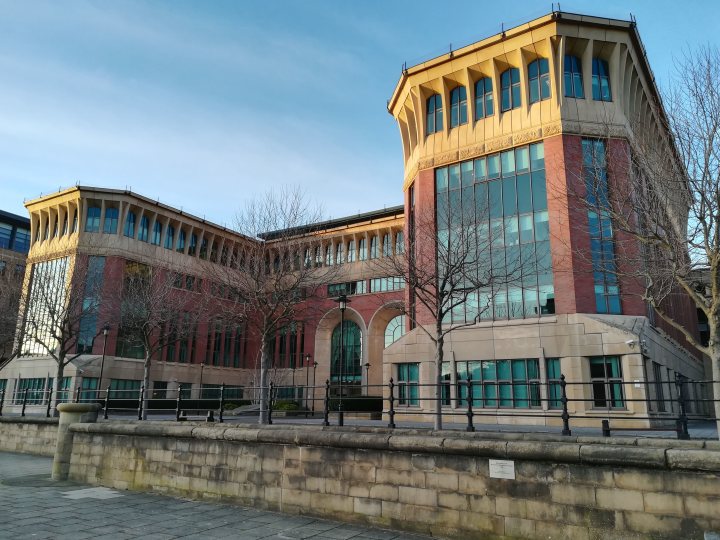 As I was wandering around, I came across some more of those cute red-brick buildings. They were calling me from the very end of the street, waiting for me to come and say hi. And like Dorothy from The Wizard of Oz, I diligently followed the path. Was it worth it? You tell me. I even got to see a tiny black dog/wolf guarding the front door. 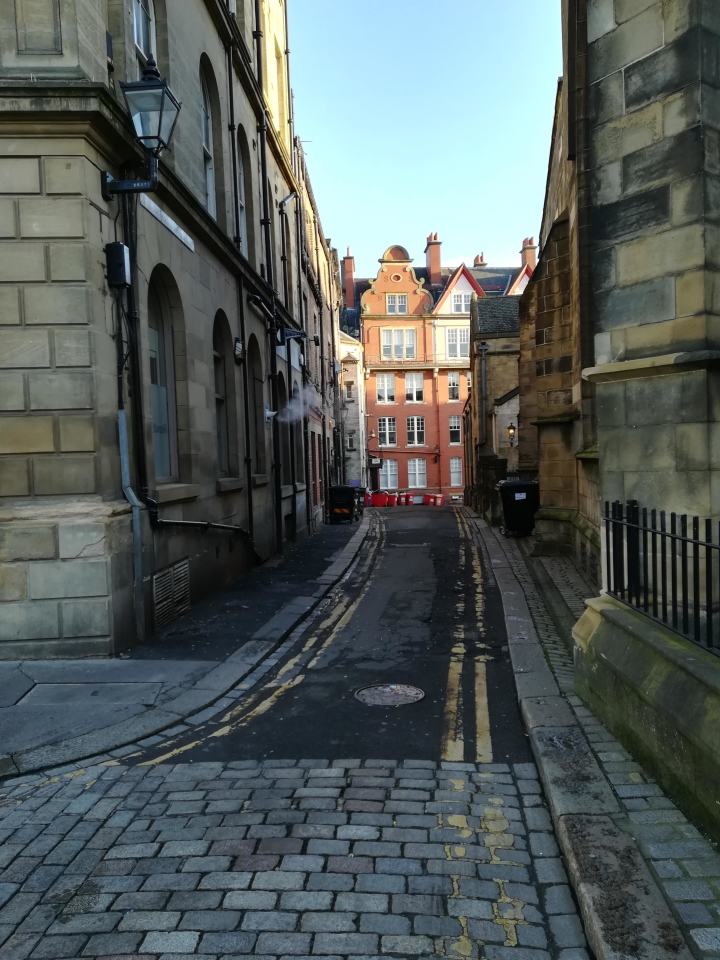 Too hard to resist 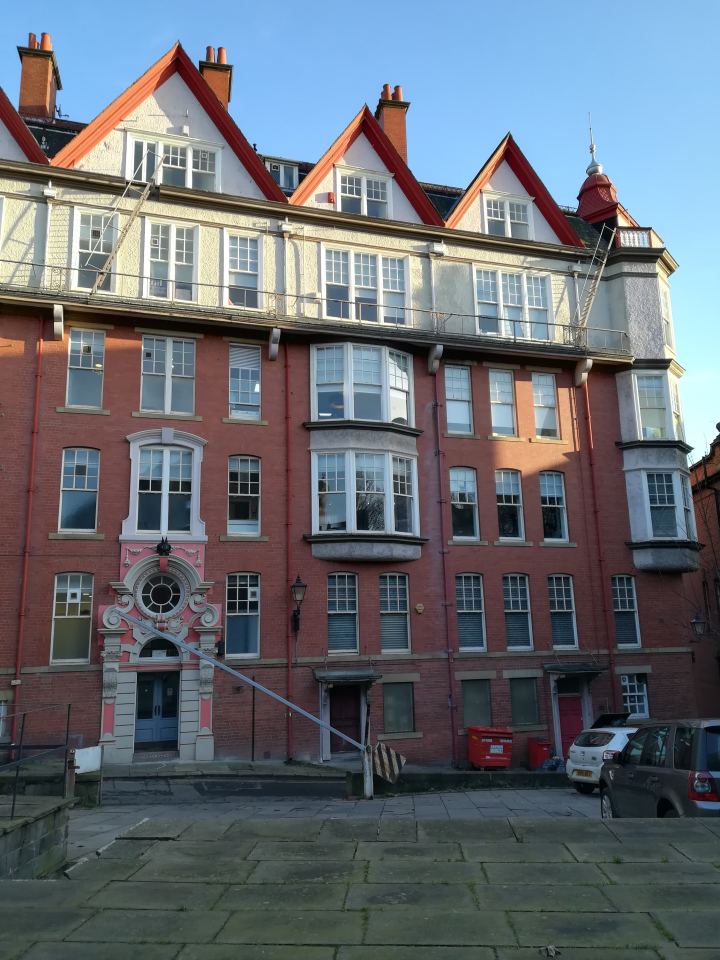 I'm in a fairytale! 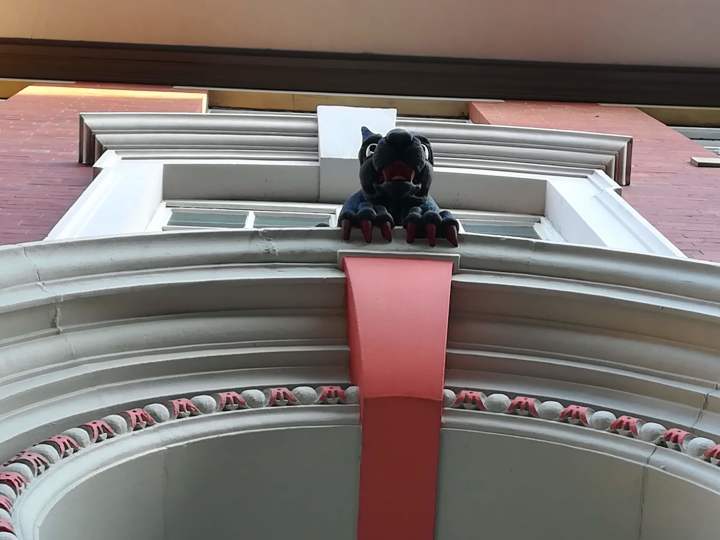 Later on, I walked away from the city centre, on my way to Seven Stories, The National Centre for Children's Books. Walking down Stepney Bank, I enjoyed some fascinating street art and I came across a car mechanic, a horse stable and an architecture's office. What a ride! 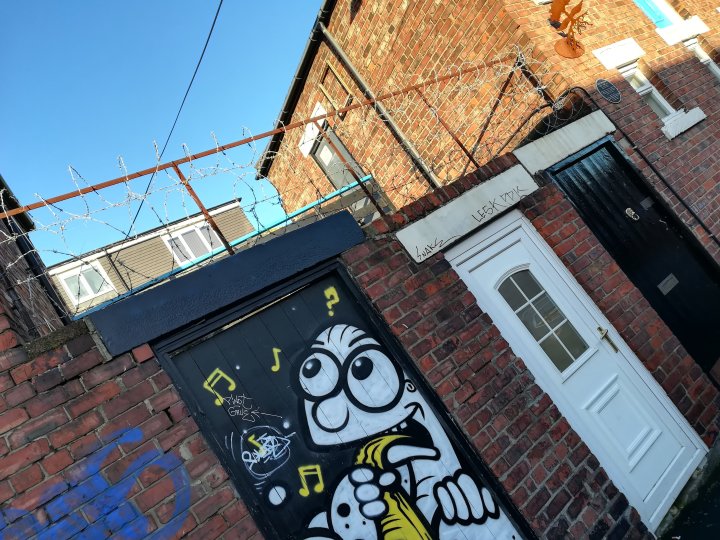 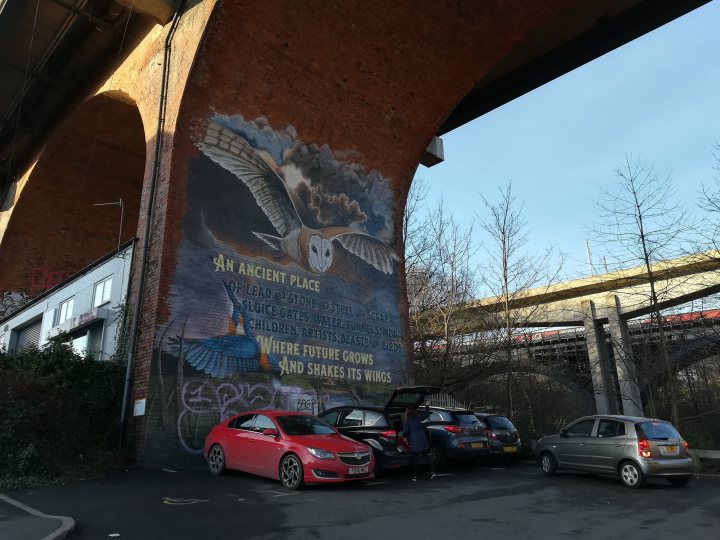 Seven Stories was literally children's paradise. Interactive exhibitions where they could crawl, draw almost everywhere, build dens... Sensory play, arts and crafts, cosy rooms where they could get comfy and read their favourite books, fancy-dress... You name it. There were two themed-exhibitions about Elmer and Friends and Maisy's Bathtime and Other Small Stories. 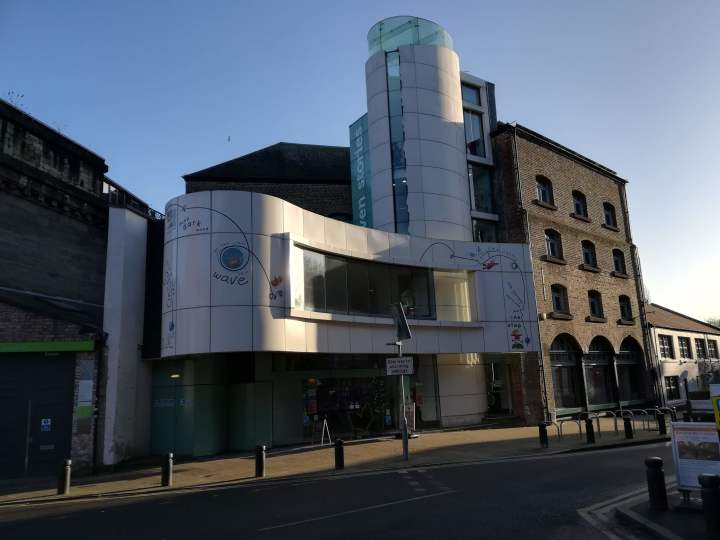 Once upon a time... Seven Stories!

On my next article, I'll explain you the rest of my adventure! Thanks for reading ;)

I am a Catalan soul living in Edinburgh. Passionate about languages and music. I love swimming in the shower and singing in the street (rain is optional, but it helps!). I have a concerning obsession with Highland cows and ginger.

See all posts by Mireia Prats →