Everything you should know about Thailand | Bangkok

by CmanTang about a month ago in asia 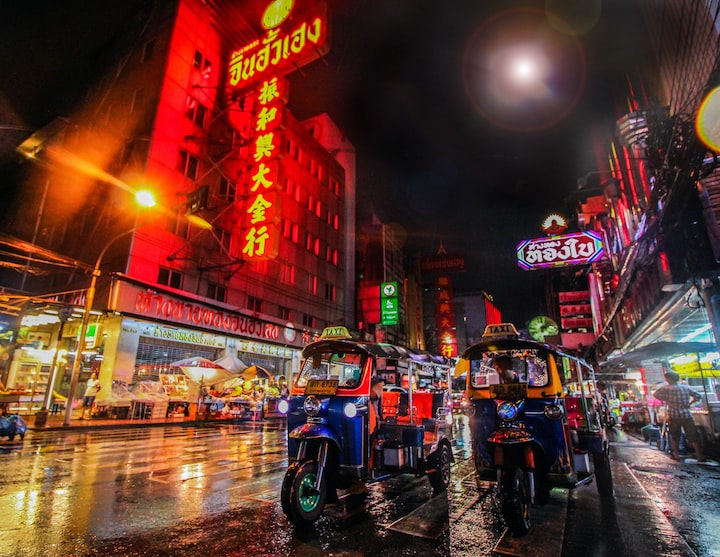 Photo by Florian Wehde on Unsplash

Bangkok, the capital and largest city of Thailand, is located in the center of the country, from Bangkok to Phuket in the south and Chiang Mai in the north. It takes almost the same amount of time. Bangkok is also known as the "City of Buddhism" because it has the most Buddhist temples in the world.

In Bangkok, visitors can witness the best of Thai history and culture, experience the city's antiquity, shop in the modern and bustling shopping malls, try the delicious local food at the ubiquitous roadside stalls, enjoy five-star luxury services, meditate in the temples and seek spiritual purification, or indulge in the nightlife.

The Grand Palace is the symbol of Bangkok, the best-preserved, largest and most ethnically distinctive of Thailand's successive royal palaces. From Rama I to VIII, the Bangkok dynasty lived in the Grand Palace, but today it is only used for coronation ceremonies, palace celebrations and other ceremonies.

Located next door to the Grand Palace, also known as the Temple of Bodhi, the Temple of the Reclining Buddha is the oldest temple in all of Bangkok and the largest temple in all of Thailand. With a large Buddha reclining on top of the altar, it is the largest reclining Buddha in Bangkok and takes up almost the entire space of the Grand Palace. The reclining Buddha is cast in iron, clad in gold and set with precious stones. The feet are beautifully decorated with 108 auspicious patterns made of pearl shell inlays. There is also a massage school inside that offers massage services as well as training in the ancient art of massage for both domestic and foreign students.

Second in size only to the Grand Palace, the Wat Arun Ratchawararam is the most frequently visited attraction with its main hall and its five iconic pagodas. The temple's most famous pagoda, built in 1842, is of the Mahayana stupa style, with the outside of the spire decorated with intricate carvings and It is the largest Mahayana pagoda in Thailand, with a variety of colorful ceramic pieces, glass and shells. The 79-meter-high spire of the pagoda rises to the sky and can be viewed in the evening or on a clear day for a breathtaking view.

The Erawan Shrine is a deity of great kindness and is one of the most popular places of worship in Thailand. The statue of the Buddha is 4 meters tall and is made up of four sets of faces, one in front, one in back, and one on the left, all representing compassion and joy, all with the same face and posture. When you enter the fence, you can buy an offering of incense on the right side of the fence and kneel down with incense between your palms. You can leave incense and make a wish, burn three incense sticks and a wreath and worship four sides clockwise. Finally, go to the water purification place on the left side and clean the water jar with a tin bowl, pat the forehead, face and arms to pray for the blessing of the four faces of Buddha. If you wish to return the blessing, you may make a different offering or go through a ritual in which dancers dressed in Thai folk costumes will perform the ritual at the cloister next to the Four-Faced Buddha. Dance a song and dance of prayer and blessing to the Four-Faced Buddha. The names of those who wish to return the blessing are recited and the dancers kneel on a futon in front of the dancers. 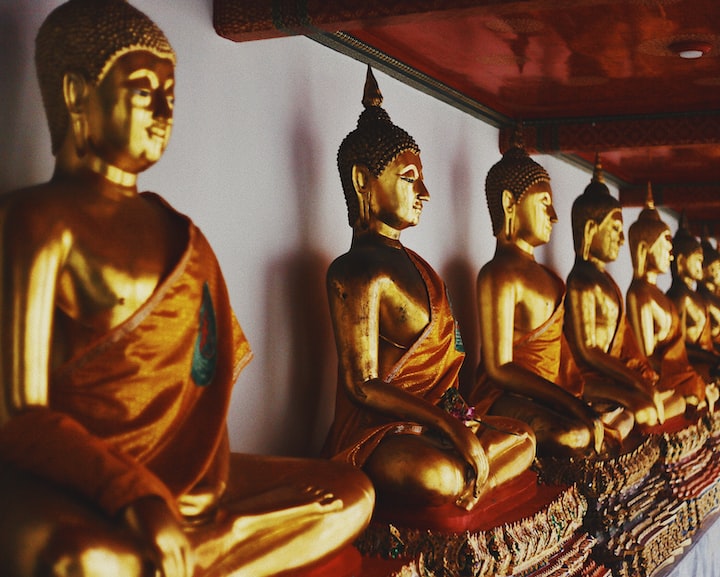 By Taylor Simpson on Unsplash

Chatuchak Weekend Market, the largest market in Southeast Asia, is open every weekend. Located on the outskirts of Bangkok. The market has over 9,000 shops with a wide variety of goods, including clothing, handicrafts, flowers, birds and insects.

Damnoen Saduak Floating Market is one of the famous bazaars in Bangkok. It is located southwest of Bangkok, about 80 km from the city. In the market, small boats selling goods crisscross the canal, plus a waterfront house on the riverbank, forming a typical Bangkok impressions scroll. However, it is quite famous, leading to a heavier commercialization of the area and higher prices than the indoor Bangkok night market.

KhaoSan Road is packed with backpackers and has many unique shops in its lanes. The streets are lined with souvenir shops, spas and bars, and even late at night, they are still brightly lit.

Amphawa Floating Market is a locals' market, where prices are cheaper than the Damnoen Saduak Floating Market. If you have enough time, you can spend a night here so that you can take a boat ride to see the fireflies on the river.

MaeKlong Market has stalls along the railway tracks with lots of fruit and vegetables. Whenever a train comes by, the train station will sound a warning whistle and the stall owners will close up their stalls and wait for the train to pass, such a view of the market It's the only place in the world where you can see it.

The largest night market in Asia, it is a renovated old warehouse at the old dock and has a neater and more bourgeois atmosphere than the traditional night market. Here you can find all kinds of food, handicrafts and clothes, and the shops are divided into different areas with high prices, so remember to bargain. Next to the night market is the Ferris wheel, which is said to be the world's fastest rotating wheel, on which you can enjoy the night view of the Chao Phraya River. Free shuttle boats pick up and drop off visitors at Saphan Taksin Station every day from 5pm. 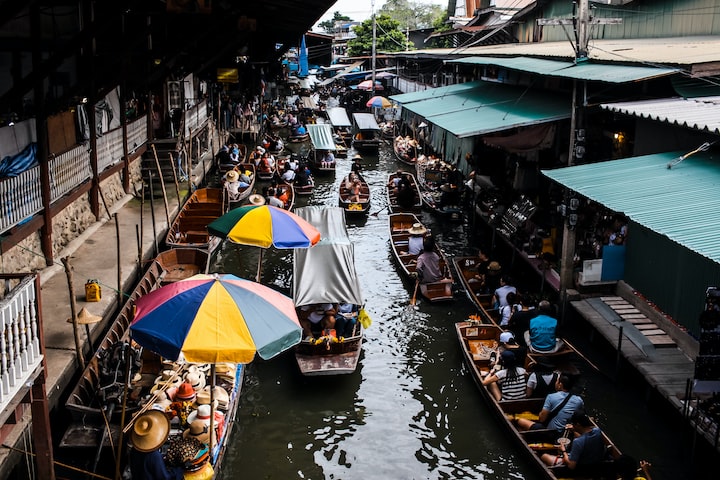 By Frida Aguilar Estrada on Unsplash

Massage is in the basic theory of Chinese and Western medicine under the guidance of massage, massage and kneading. Thailand's SPA is as famous as massage, and there are SPA shops everywhere, each hotel also has its own exclusive SPA Center, just a little more expensive.

The nightlife of Bangkok's young people is a rich one, with a number of nightclubs and bar districts that will drive you out of the choice blues. In the whole city, there are three most popular nightclubs for young people: Khaosan Road, which is popular with backpackers.Road, the RCA district on Rama 9 Avenue where the local hipsters hang out, and the upscale nightclub district Sukhumvit Ave. Soi11, Thonglor and Ekkamai.

There are a lot of great shows in Bangkok that are worth visiting, and the show is usually a costume runway show, theater performance, and song and dance. 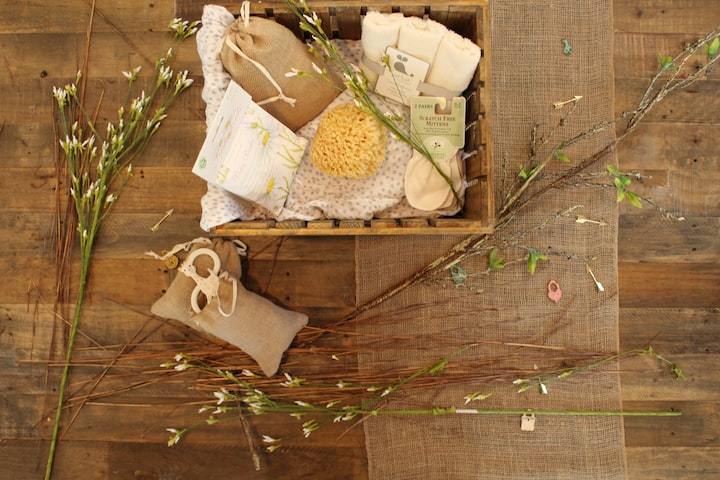