How I learned hospitality through many cups and saucers 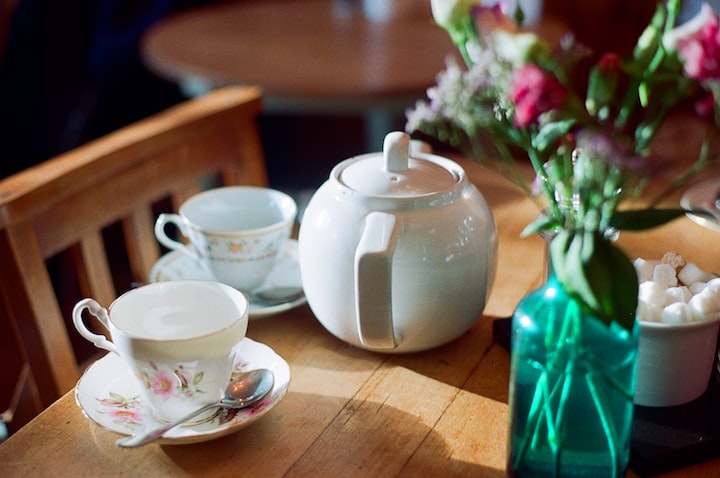 Photo by Seb Cumberbirch on Unsplash

We were a small acting troupe from the US that would be touring and performing in the UK for two months as part of college credit. The previous six months had been spent planning, raising funds, acquiring a small bus via friends (which we named Connie), memorizing and rehearsing, and figuring out how to pack the one suitcase we were allowed. Speaking for myself, food had not exactly occurred to me. I didn’t know that I would be introduced to a life-long comfort food.

After a long flight, we arrived in a downpour. The sweet elderly gentleman who picked us up had parked off in the wilderness of the parking lot, and it was easier for him if we walked to the bus. So, all thirteen of us slogged through the London rain to meet Connie.

Connie was…a bit under the weather. The day before, a lawnmower blade had chucked a stone through her back window. It had been “fixed” by taping a long piece of plastic to the top of the window, leaving the rest of the plastic to flap in the breeze. Of course, this meant that rain freely poured through that window and soaked our luggage below it—but everyone was too polite to point this out. We soon discovered that half of her side windows leaked profusely, and the fan on the top of the bus collected water and would generously pour the collection into someone’s lap when we went around corners. It was a three-hour trip to our first stop; half of the troupe had umbrellas open inside the bus.

We arrived, needless to say, soaked. All of us. Completely.

Our bus driver was also our host for the week, and his wife was charming and hospitable. She took one look at our dripping group of thirteen 20-somethings and bustled about making tea.

Up until then, tea was something I had only ever experienced the Indiana way: chilled and unsweetened. But I was frankly too tired and cold to care what I was drinking. I quickly learned that the average cup of tea wasn’t served with the “cream and sugar?” question so stereotypically assumed. She just made tea.

She put on the electric kettle while she set out enough cups for all of us, popping a PG-Tips tea bag into each cup before she poured the hot water over. She let it steep two minutes. Then she put in a spoon of raw sugar--large, amber crystals—an utterly unique flavor to me at that point in my life. Not as sweet as white or even brown sugar. Then she drizzled in a thin stream of full-fat cream and handed it to me with a spoon. I watched the cloud of cream billow and spread in the cup. It looked a little like mild coffee. A little dizzy from jet-lag, with squishy-wet socks freezing my feet inside my shoes, I gratefully held the hot cup. And then I tried it.

After I saw exactly how it was done—steeping time, ratios, type of tea, etc, I had many more experiences in the UK where I was (we all were) soaked through and holding the life-giving cup of tea. We drank hot tea on the coast of Scotland with waves crashing on the cliffs. We were supposed to perform on a pebble beach but got rained out, so we performed soaking wet on a makeshift stage in a makeshift auditorium. We drank tea after we had sung in an ancient stone church, caught in yet another rainstorm. We drank tea after we hiked up the highest point in Wales at 5am to catch the sunrise over the sea—and lost the sunrise to the gathering clouds and rain. I don’t think my shoes were fully dry even once during those eight weeks, but there was plenty of hot tea to balance it out.

Every place we visited served PG-Tips. Maybe it would have been Earl Grey in a tea shop, but in homes and tiny theatre venues, the people would stand around afterwards and drink PG-Tips and chat. No one left quickly—there was warm tea to be had, after all. The host or hosts would make trays of tea in cups and saucers and bring them around—all laced with raw sugar and a drizzle of full cream. If you didn’t like it that way, you still held your cup politely. It jolly-well wasn’t Starbucks, after all.

Returning home saw me entertaining many fellow students and then students of mine in my office or in groups in my home. I didn’t have much to offer—but I had tea. I allowed myself the luxury of hunting down PG-Tips, buying raw sugar just for the tea, and keeping full cream on hand. A friend even got me an electric kettle.

To this day, my idea of comfort on a gloomy afternoon is a hot cup of PG-Tips. When I make it for guests in my home, I make it the way I first tasted it, too, as a nod to all of the kind hospitality we experienced and the people in England, Scotland, and Wales who let us into their lives with a cup of hot tea.

Lydia is a freelance copywriter and playwright, watercolorist and gardener living in Michigan. She loves to collaborate with writer friends, one of whom she married. Her inspirations come from all of these interests and relationships.

See all posts by Lydia Stewart →