by Joanna Celeste 11 months ago in solo travel

A tactic for traveling in Los Angeles 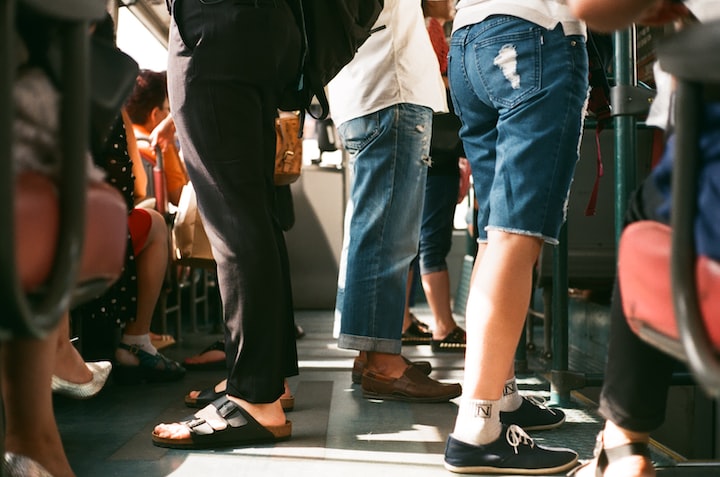 I used to ride public transportation in Los Angeles, in the mid 2010s. I met a wide range of people that way, encountering everything from a die-hard racist who demanded a black person ride a separate bus to a person who went off on the bus driver, screaming and attempting to grab the wheel.

Before I would start my bus journey, I would send up a silent prayer for an uneventful ride. I had the disposition to get involved at the slightest injustice, which got me into all sorts of situations. Sometimes, I would return home electrified, tell my family about it over dinner, and promise not to get involved next time. Unless, you know, everyone else did nothing, and then what was I going to do?

“Call the police,” my mom would say. “Don’t get involved. What if someone gets violent?”

I should probably note that my mindset was a bit like those really cute fifteen-pound dogs who have no sense of their size or capacity to fight, who get all indignant and fierce at their seventy-pound counterparts. When my dog did it, I called him a chicken nugget because he could get eaten up in one bite. When I did it, well…

In an effort to keep my promise and lie low on my day-long outings involving three buses each way, I developed a whole battlefield strategy—I dressed as unisex, dowdy, and unremarkably as possible (without going into the homeless fashion territory), I put my little earphones in for my MP3, and I read from a thrift store paperback. When my eyes began to hurt, I closed them for a song. I memorized the stops, alternative stops, and the landmarks that indicated I was about ten minutes away from where I needed to get off, so I could put my book down and focus properly.

Because my bus stops were often tightly interlinked (get off at bus stop A and catch the B bus ten minutes later, sometimes even five minutes later) if I managed to score a seat I stayed there under life-or-death conditions. Pre-COVID, it could reach sardine-squished levels on a bus.

However, I ran into an unexpected pattern of random guys sliding next to me, aged late 20s to early 50s, and hitting on me. I couldn’t figure out what signals I had to be sending that made them think I was open to this, though later I discovered my attempt to “do all the right things” resulted in me painting a huge target on myself: this timid person will do anything, believe anything, if you give a few compliments. If I had been sixteen, like I looked at the time, I might have fallen for it. But I had learned that none of those superficial compliments had anything to do with me, as a person. They were part of a idiomatic language, full of double meanings and hidden agendas.

I had a multi-leveled approach on how to deal with the guys who tried to hit on me. (Sadly, simply saying “I’m not interested” out the gate just started a long argument, mistaken for playing hard to get.)

1) Head them off with “I’m not actually a girl”. That did not always work, but if it was because I had actually been considered as an effeminate man, this was met with “oh, yeah, I know”. If the answer came back with any variant of “that’s fine, I’m good with whatever”, I went to step 2.

2) “I’m not interested in men.” Usually, that ended it there. Others plowed on.

3) Burst into giggles at their next suave line and exclaim that I could not wait for prom, and that I’d finally be able to get my driver’s license in a few months. Most beat a hasty exit after that.

4) The stragglers that lit up at “oh, a minor, groovy” got hit with my secret weapon.

My mom had taught me once how to deal with crazy people. She had said, living in New York in the mid ’70s and ’80s, you met a lot of unexpected situations on the streets. If someone tried to mug you, just burst into screaming and flailing. Usually, they would be so startled they would run away. (Or you got stabbed and shot regardless, but odds were on them running.)

I developed my version of this for the Oh No, You Don’t people. It went something like this:

“I’m Taurus and Aries. Mars and Venus. Fire and earth, you know?”

“It means I’m compatible with some signs, but it depends on what sign I am at the moment.”

“It’s complicated, I know. I’m first and second house. But the tricky part is that I’m both yin and yang.”

“I’ll just—” At this point, they would start to make their escape, either by scooting away or trying to stand up. I would pull them down, or I would scoot over after them.

“It’s okay, I’ll break it down for you,” I would continue. “So I’m both male and female energies. Have you ever had a Moxie? Cutest dog ever. They’re part Maltese, a toy pup, and part dachshund, a hunting dog. So one minute they’re all cuddled on your lap and doing that totally adorable snoring thing, you know, where they kick their little feet and you wonder if they’re dreaming about running? Then, WHAM,” I would clap my hands, “he leaps awake and starts on the high-pitched barking and practically hopping in rage. For a doggie, it’s precious. For a human, not so much. But I’m not bipolar. I was born between two signs.”

It used to be a wonder to me, how my little thirteen-pound dog could exert enough effort that, despite me being a little over five feet and ten times his weight, he always ended up walking me. I’d say “Hey, Jasper, let’s go this way,” and next thing I knew I was being towed in the opposite direction, protesting “Wait, I’m the human here.” But I later discovered a strange force that would compel people to move—or stay—in the way you wanted them to, so I called it doggie physics because it made no sense. On the bus, I wouldn’t physically touch the person next to me, but they would make an attempt to get up and then plonk back down by themselves.

“So you have to be careful,” I would explain as gently as possible, “You never know if you’re approaching a toy dog or a hunter, right? When you try to make new friends on the bus?”

Sometimes they would nod, kind of like I would be towed away by my dog. But they would also start to edge off the seat again.

I would grab their hands. “But especially! Especially someone born between the signs. They might be all cute and cuddly,” I would let go, “and WHAM!” I would clap my hands hard in the space between us, “they turn into a warrior. Man, you really don’t want to mess with getting on the wrong side of those. Some of them even get violent. Might have come from the God of War, you know. But, it’s okay!” I would pat their hand and move slightly away, as my stop was either coming up or an alternate stop was becoming available.

“I’m not as violent anymore,” I would say warmly. “I went to anger management. I almost killed a person, you know. They couldn’t take a hint. But I’m better now. Damned three-strikes law, I have to be careful not to lose my temper and end up in jail again.”

“That’s my stop!” I would grin as beatifically as possible, channeling all of my so-called Venus softness. “It was nice meeting you! Have a good day!”

“Thanks,” they would usually mutter, all discombobulated. “Yeah. You—you, too.”

I would wave cheerfully and get up, then I would go to the back door where I could exit the bus.

Later, when I relayed my trip on the bus, my mom said, “That’s it. Next time you’re taking an Uber.”

I love to cook, dance, sing, clean, study, invent, color and write. I am enamored with the magic of the every day things, the simple things, and the discovery of new things in areas I had thought I knew. Life is a fantastic breeding ground.

Read next: The History of Waterloo Station