Why Have We Let The Media Cover For Biden For So Long?

by Daveed Gittens about a year ago in president
Report Story 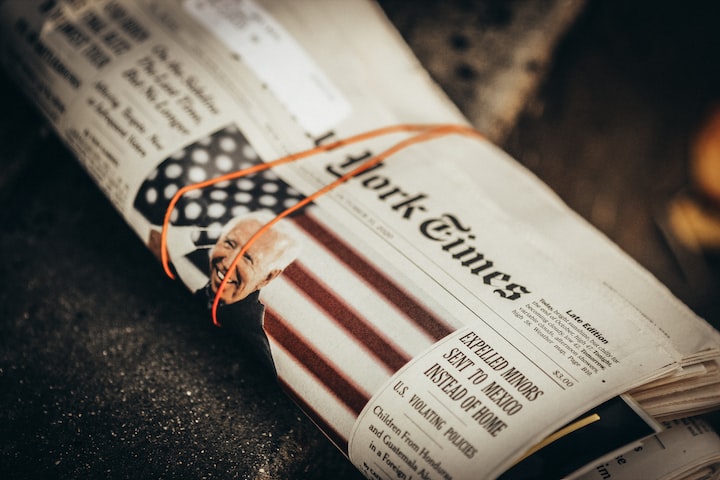 Since Biden entered office this year he has been amazing, right? At least that is how the media largely portrays it. Do not get me wrong, Biden has done some good things since getting in office, such as the Covid relief bill, however, we cannot allow ourselves to be blinded to everything else going on.

Left-wing media seems to be acting, at times, as an extension of Biden's communication staff. This has been clear as day this week, with the fawning coverage of Biden's meeting with Putin. A meeting of which, if it was Trump, would have been covered very differently.

As important as the Biden-Putin meeting is, I feel it is more important to focus on two of the most egregious things, the media has allowed Biden to get away with over this last year.

Here we are taking not about past slavery with African Americans, but current day slavery happening in China right now. If you are unaware, the Communist Party of China, has been enslaving Uighur population, most of which is Muslim, for years. Human rights groups say that more than a million Uighurs have been placed in what China terms "re-education camps". Frighteningly, there is evidence that China is using the Uighurs for forced labour and forcibly sterilizing the women. These atrocities are of such magnitude that the international community deemed it genocide.

So what does this have to do with Biden? Well, four months ago, Biden excused the literal slavery and genocide as "cultural differences" and said he would not speak against it. He says this very clearly in the video below.

As America, reflects on its racial problems and its past with slavery, why is Biden condoning genocide and slavery? An equally important question is, why has the media let this slide? Should the American President, be able to excuse what his own country classifies as genocide and the media not actively address it?

If you know Joe Biden, you know he has a history of being...well creepy, when it comes to little girls, especially. Many women have complained about how he makes them uncomfortable and he has been videotaped appearing to sniff the hair of multiple young girls. Now, I am not implying Biden is a predator by no means, but his behaviour warrants a closer look.

While speaking at VA military base in May, Biden takes a moment to look across at a young girl and comment about her pony tails, her legs being crossed and says that she looks like 19. This gets very creepy when you learn that the girl in question, is 9 years old, not 19, but 9!

In this era, of Me Too, we should say something about this, no? Well, what about actual accusations of sexual assault? Many of you probably have no clue what I am talking about right now, I am talking about Tara Reade. Tara Reade was a former senate aide who accused Joe Biden last year, of assaulting her in 1993.

The media quickly jumped to work, not to investigate this to see if it had merit, but to smear Reade. This was should as crazy development, that involved media smearing and Me Too activists implying they would not support Reade because they supported Biden. Alyssa Milano, a prominent activist in the Me Too movement, "explained" her silence on the accusations last year.

Milano, says does not seem to have the same "Believe All Woman" stance as she as had years prior, going so for as to say she is not willing to throw away a good man [Biden] over the accusations.

She also implies there was not enough evidence, however, there was a fair amount of evidence to support Reade's claims to some extent. There is audio of a woman, reported to be Reade's mother, calling in to Larry King in 1993, indicating that her daughter had experienced trauma caused by a senator but was not willing to come forward at the time.

Moreover, a former neighbour of Reade corroborated the allegations and 1996 court documents showed that Reade told her ex-husband about sexual harassment in Biden's senate office and had made a deal with the chief of staff of the Senator's office and left her position.

But where was most of the media, mostly absent and shutting down the story at every turn. Now, I am not saying that there was no coverage at all, there was some coverage given by some media outlets but the amount of coverage given does not nearly come close to the gravity of the situation. This out right dereliction of duty by American media was so bad that 60-Minutes Australia was the one to actually try to cover the story properly.

I do not know if Tara Reade's allegations are true or not but they definitely should have been properly investigated, especially since this relates to the President of America.

More stories from Daveed Gittens and writers in The Swamp and other communities.