by Maxwell Jordan 4 months ago in fact or fiction 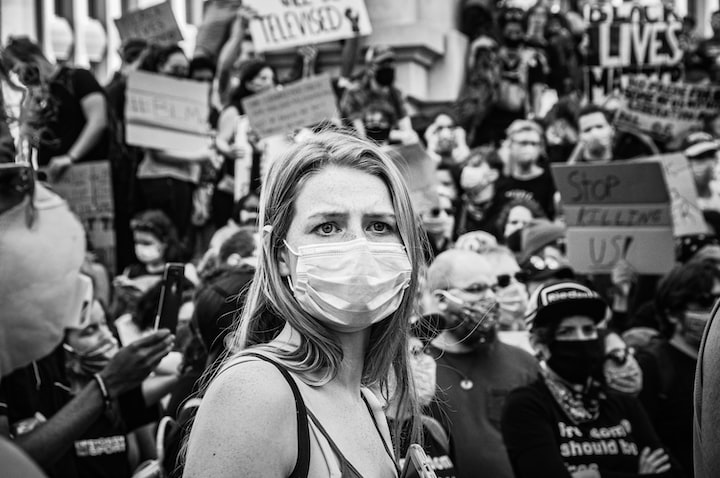 Photo by Edrece Stansberry on Unsplash

THIS IS A RANT ARTICLE & I USE QUITE A BIT OF PROFANITY. I ALSO THINK FOR MYSELF. SO, YOU HAVE BEEN WARNED…READ OF YOUR OWN VOLITION. THIS ARTICLE WAS INSPIRED BY MY LIBERAL MYOPIC NEW WHITE “AUNT”. #IAMNOTAVICTIM

“Life is harder for you because you are black. Luckily, I, A WHITE PERSON, will defend your poor sad down-trodden life. I do this because…I’M YOUR SAVIOR…Whoops! I mean…I’M A LIBERAL.”

I swear to the almighty, there are no people more racist than white liberals who think…

Who KNOW, what is best for MY FUCKING LIFE.

If you have never read my work or are unfamiliar with my stuff on this issue, I am black.

At least I think I am.

I mean, I don’t subscribe to the “victimhood BS.”

So, I guess that makes me NOT BLACK.

I mean I REALLY do not like the Democrats or the Liberals.

I didn’t vote for Joe Biden, so we all know right there, as Joe Biden so uncharacteristically spoke in a coherent sentence.

How in the FUCK AM I A VICTIM?

Yeah, I have assholes who try me.

Assholes try every one.

I ain’t the guy to back down.

Bring an army and see them get decimated by MY WILL.

I don’t give a shit…I DON’T GIVE A SHIT how much of society is against me.

This is not bravado.

This is not big dick energy.

This is not being aggressive.

This is keeping MY MASCULINE FRAME.

Something that many guys, especially black guys, are losing by capitulating to this stupid idea that we are victims.

NO WE ARE NOT! #IAMNOTAVICTIM

I don’t think that every white person is secretly racist — and to be honest, I don’t f*cking care if you are.

You have every right to hate BLACK PEOPLE.

You have every right to say NIGG#R at the top of your lung.

You have every right because this is America!

Why is that even an issue?

Who cares that Billy Bob hates me, or some loser geek hates me because I am black.

Miss me with that nonsense, that I am a victim.

I don’t think “The Man” is out to keep me down, and if he is…BRING IT BITCH.

See, I am not a f*cking victim, but I swear to the almighty in the unknown if white liberals do not try and cram this narrative down my throat and make me swallow their disgusting pill.

AND I WILL NOT!

WHITE LIBERALS: Do Me A Favor, SHUT THE FUCK UP!!!!!! #IAMNOTAVICTIM

I just met my uncle and his new wife, who I haven’t seen or met in 15 years. He is a black man, married to a white woman, and for f*ck sake.

Every f*cking issue that is bad in America can be pointed to…DUN…DUN…DUN….WASCISM.

The reason that gangs in the inner city are killing each other is because of…wascism.

It has nothing to do with some people who share the same ethnic group hating each other.

Because we all know ALL WHITE PEOPLE JUST LOVE AND ADORE EACH OTHER.

ALL OF YOU! SINGING TOGETHER THE BRADY BUNCH THEME SONG!

This is why divorce is so common amongst the white population.

The reason “Mama Shaniqua” has 7+ kids and getting money from the government who lives that shitty hood rich life is because of…wascism.

The reason that many blacks are living below their means when we have every fucking opportunity (it’s called the internet, my n*ggas) is because of…wascism.

The reason I stumped my toe this morning is because of…DUN…DUN…DUN… wascism.

Goddamn wascist white man coming in here at 3 am in the morning to place that chair in my way. He knew it, he knew that I was going to walk in front of that chair.

Wascism is the primary reason for ALL OF THE WORLD PROBLEMS.

The mass murdering of people in North Korea by the North Korean government…wascism.

The Cartel killing their own fellow Mexicans…wascism.

Child soldiers being used in the DRC to fight wars…wascism.

Wascism in WHITE LIBERALS eyes is the central major problem of the world.

SHE FUCKING TOOK 10 seconds thinking about it.

I asked her, “is being a murderer less than a wascist?”

“Is being a pedophile less than being a wascist?”

“Is being a genociding mass-murdering POS worst than being a wascist?”

“But…but…society is out to get black people.”

SOCIETY IS OUT TO GET EVERYONE.

I swear to the almighty, white liberals live in this bubble where they are fucking saviors to NO ONE.

They look and sniff out wascism everywhere that they can.

And when they can’t find it, they FUCKING CREATE IT.

I swear to the almighty in the unknown, white liberals are easily the most wascist people on this planet.

And what hurts so much is how blinded they are to their own wascism.

You feeling sorry for me is NOT appreciated.

Feel sorry for yourself for the ONE LIFE you are wasting away fighting a damn battle THAT IS ONLY TAKING PLACE IN YOUR DAMN MIND.

(Note: Type in the term, while looking for a picture, the word “victim” and what do you see “BLM” images. Come on…they are conditioning people and us to see us as nothing more than VICTIMS. MISS ME WITH THAT BULLSHIT.)

How Liberals See Us: They Luv Us So Much! LOL!

I am an avid writer on issues around polyamory, individuality, narcissism, introversion, embracing hard times, going it alone and life in general!

Read next: On Human Misunderstanding