by Christina DeFeo about a month ago in humanity 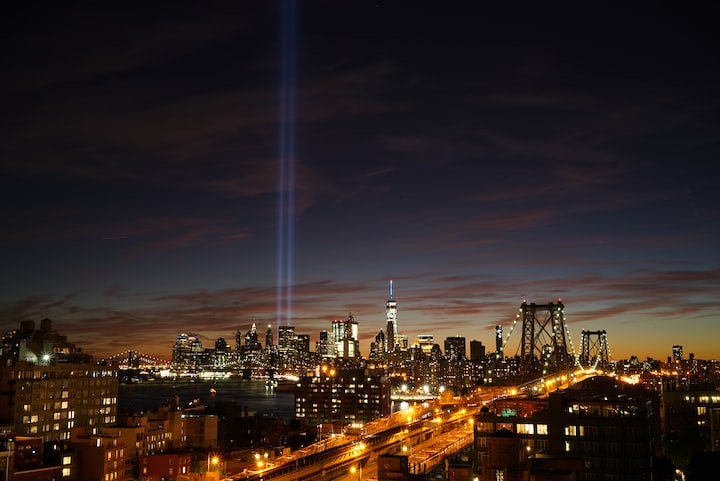 Photo by Jason McCann on Unsplash

I don’t know how as teenagers we did it, but having to be at school for 8:00am did not seem as much of a chore as having to be at work for 9am as an adult now. That could be because work is like an antisocial campaign where too much laughter gets you called into the office and school is the epitome of teenage social life. High School was the place where you had all your friends, wore your best outfits, and had the most fun, most of the time. High School was not enjoyed by everyone and just like everyone we all have that one memorable story.

September 11, 2001 must have been as monotonous as any other morning because I don’t remember it until about 8:45am. I was sitting in my sophomore Algebra class when the class clown came running into the classroom from his morning hallway strolls. No matter how much a teacher tried, they could not keep Devon in his seat.

“A plane hit a building in Manhattan!” He shouted as he stood in the doorway.

“Devon, come sit down! You have already disrupted this class too much and it only started 10 minutes ago!”

"Mr. G, did you not hear me?! All these teachers are crying in the hallway, a building has been hit by an airplane!”

My heart is racing at his words and I sit up straight at my desk. Is he telling the truth? There in the hallway, security guards and teachers are running to the left side of the building. Mr. G leaves the room and goes to the classroom across the hall. We all sat there looking around at each other and when Devon told us all to come on, we got up slowly and followed. The classroom across the hall had windows with the perfect view of Manhattan.

My High School was located in the Bay Ridge section of Brooklyn so our view of the city was very clear, too clear. By the time my group got to the window, we watched as the second plane hit the second building. I will never in my life forget that image; it’s like a gif in my head now, one that I wish I could evict from my memories. I remember the big cloud of gray. fiery, smoke exploding in the sky like a bomb just went off. The surrounding screams, the running of some kids away from the window, while others, like myself, stood there petrified was all I heard. The bell rings, knocking us out of the trance.

“Come on children, on to your next class. The day will continue until directed otherwise”, instructs the teacher occupying the classroom with us.

Third period was as normal as it could be given the circumstances. My physics teacher actually stood there and taught us the lesson about inertia; a subject that is forever ingrained in my knowledge due to the traumatic circumstances surrounding it. Inertia being if an object is at rest, it will stay in rest until the influence of an external force, what an ironic lesson to teach, no wonder I never forgot it. Thinking back, I applaud him. He tried to keep us in a calm state while attempting to keep himself calm. Thank you Mr. P, for your bravery and composure, it probably helped all of us more than we realize. This classroom also was in the basement with no windows. Out of sight, out of mind?

Fourth period was my lunch period and I always disliked it because it was at 10:20am and I was not the type of teen to eat a burger that early. Similarly, the next turn of events will cause me not to go to that lunch period for the rest of the semester. We all dragged the tables next to windows that had the view of the city in order to keep watch. Watching the destruction from afar provided us with the possibility we were still safe, at least for me. Our cafeteria was on the 8th floor, so our view was even better than my Algebra class. Everyone is chatting about their conspiracies and assumptions as no one has informed of the who, what, and why yet. A game of spades is being played at the table as usual and I usually play, but not today. I could not focus. I was not about to taint my reputation because of a bad day either. I had this bad feeling in my stomach and I just wanted it to go away.

Gasps, shrieks, and cries followed as we all looked out those big cafeteria windows. Some students hid their faces in the arms of their friends, while few of us looked on. I was trembling. My entire being was telling me the world was ending and my brain was the only entity fighting against that. Nope, the world was not going to end when I was just about to turn 15, I tried to convince myself as we watched the tallest building in New York City collapse into dust. Suddenly, the sound of the doors flying open made me jump right where I stood. I went to the same High School as one of my cousins and it happened to be her. She looked around the cafeteria until she spotted me. She was crying as she looked me dead in my eyes and said,

“Christina...my mother works in that building.”

The rest of my school day was a blur. We were only allowed to leave if a parent came to pick us up. 75% of the students were picked up while the remaining 15% of us finished out the school day. I was a bit disappointed I was never picked up, but I expected it. My mom had no way of coming to get me, we didn’t have a car. My cousin was picked up by a family member and the next time I saw her was at her mother’s funeral. I walked home that day as train and bus service were suspended. My walk was about 50 blocks, minimal compared to those who had to cross bridges to get home.

I was one of the lucky New Yorkers who suffered the least during one of our biggest tragedies. My uncle was part of one of the construction unions that helped clean up the aftermath. Twenty years later, he is battling throat cancer related to his exposure during that time. Thank you Tio for your selfless acts those weeks that followed. You helped clean our city up and give closure to those who lost loved ones.

Thank you to all those firefighters, police officers and EMTs who bravely risked their lives in the name of rescuing others. They did not allow their fear to drive them away, but it drove them right to the scene. I pray for all the families affected, that the time passed has allowed them to heal in the best way possible.

The day after 9/11 was probably one of the most unified days our nation has experienced, but there was a silent divide amongst a few due to the nationality of those terrorists. We were collectively sad and it was felt by the world. Hate temporarily vanished on September 12, 2001, but would creep it’s way back into society slowly thereafter. If people could live their lives without acting on their hate for others due to differences in appearance, personality, preferences, beliefs, culture, lifestyle, then the world would be a much better place. As a teenager, I did not grasp any of this until I was older, but I did learn real fear that I still hold onto today.

Twenty years later and still, if my train stalls in a tunnel longer than five minutes my pulse increases. I heard stories of people in the subway that morning of 9/11 never having a chance. In 2004, I started going to Pace University near the downtown area where the World Trade Center once stood. The R train skipped the World Trade Center-Cortlandt Street Station as it was still being cleaned up and renovated. A year later the NYC MTA would go on strike due to disagreement in employment contracts and I had to walk home again, this time from Manhattan to Coney Island. Low flying, rumbling planes make me pause for a second ensuring the world is still safe.

New Yorkers are resilient, strong, courageous individuals. Thank you New Yorkers for your New York State of mind, it has gotten us through all of our hard times and will continue to be the reason for our successes. The world is full of great people with incredible talents and intelligent minds who will always be triumphant over the hate and ugly in this world. We will never forget 9/11 as we shouldn't. No part of history should be forgotten or ignored as we should learn from our mistakes, not repeat them.

Thank you again to everyone who gave their service on those frightful days that followed September 11, 2001. You made all the difference.