by Helen Stuart 2 years ago in trump
Report Story 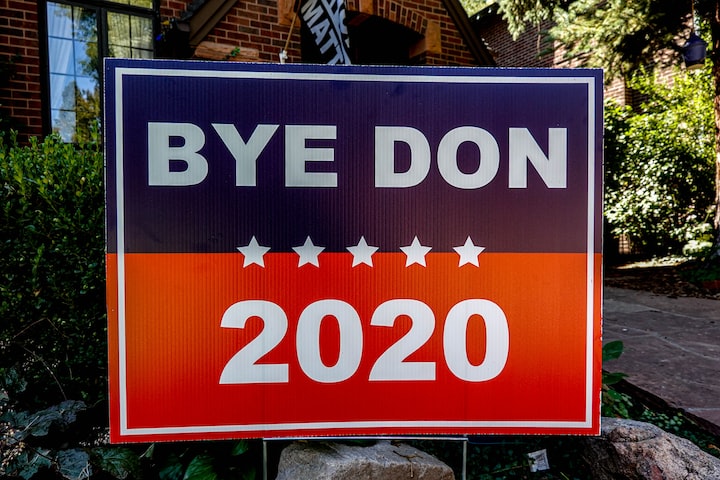 I am watching, like most Americans, for the polls to confirm that Donald Trump will no longer be President of the United States of America. Sadly I am less enthusiastic about the positive merits of Biden than I am about just getting rid of Trump. But there is one thing I know, more than eighty percent of murders are committed by family members, Trump has been like the abusive husband to America, and most husbands kill their wives when they are breaking up. This is going to be a mighty big break up.

Maybe I'm being too dramatic. Well I read all the pamphlets at the women's shelter, not to mention having plenty of experience of my own on the subject. A lot of people may say "Trump never abused us, he was a great president." I would answer back, "You have Stockholm Syndrome." Does anybody know what that is? Stockholm Syndrome is where the victim begins to relate with the captor or the abuser because it is psychologically more tenable than seeing the abuser as an evil force controlling their life. Someone might say, "well it wasn't that bad." To that I will reply with the boiling frog story, which I really hate, if you put a frog in tepid water and then gradually turn up the heat, you can boil it and it won't feel like it's being boiled. But if you drop it right into boiling water, it knows its being boiled. I hope no one tries that because its a psychopathic saying, and frogs are really great little creatures.

So would we be safe from The Wrath of Trump if we elected him for four more years? Not on your life. The man barely campaigned and if we acted like we wanted him back, neigh, took him back, the abuse would escalate. That is the chain of abuse. Sure we might have a honeymoon phase but in no time it would go from not just talking about grabbing women's private areas to doing it. How can we have a president that is so disrespectful to over half the population?

I have to say, I have learned that presidential elections never mean that much to me, and probably not that much to a lot of people. I have been a boiling frog all my life and I can't tell what temperature the water is anymore, I'm just hoping someday I get to go back to the pond. It's just one man then another, pretty much the same thing. I actually am physically nervous about this election because I know Trump won't bow out gracefully and I worry about his months in office as a lame duck and the damage he could do.

But there is a bright spot, VP running mate to Joe Biden, Kamala Harris. She makes it okay that Biden is so old.

More stories from Helen Stuart and writers in The Swamp and other communities.