by Isabel Valencia Zuñiga 4 months ago in trump 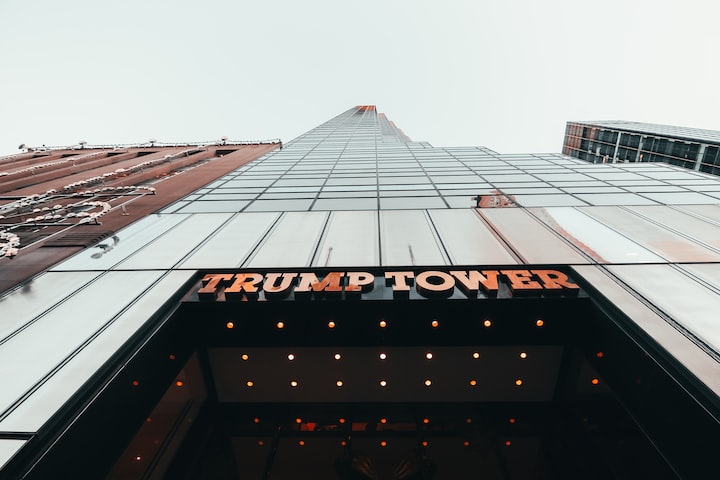 Photo by Miltiadis Fragkidis on Unsplash

This is a story about a fairy, a fairy whose existence depended solely on others’ believing in her. She’s best known as Tinkerbelle, Peter Pan’s companion and sidekick.

This story is also about our infamous president, a president known for making the public believe him to be a billionaire for the sake of it. He’s known as Donald Trump, The Apprentice’s main character and America’s hero (or villain).

Donald Trump lived under his father’s shadow, constantly trying to prove himself to be as grand, and as successful, and as admired as his father—a true self-made millionaire. This story is by no means intended to shame the president, nor judge him; this story is simply an outline of how close reality and fiction are to each other. Fiction is just an alternate way to analyze our own reality and to tell stories of which we know too well.

Tinkerbelle was known as a small pixie fairy who lived in Neverland, she was known to have a crush on Peter Pan, and was very jealous of any girl who got to be around him, especially Wendy, the girl that Peter Pan decides to take to Neverland. Tinkerbell did not have the ability to speak, she had always communicated through her face expressions, and magical pixie dust of course. She was described as a mean and spoiled brat, the only person she had been kind and honest to was Peter.

One of the first things she does while trying to find Peter's shadow is to admire herself at a mirror... that is until she finds out how big her butt is.

Towards the end of the Peter Pan fairytale, Tinkerbelle needs help (from the audience) to clap hands and show that they believe in her, they believe in magic and that because of their determination to believe—she comes back to life and shines brighter than ever. This is known as the Tinkerbelle Effect, where if you believe in something hard enough and intensely enough, it’ll inevitably come true. A theory that has translated in many different ways and holds to be true in many arguable examples; todays challenging interpretation happens to be Trump’s rise to power.

I’m not about to pull up numbers retrieved from sources I am determined to question. However, from what my armature liberal self has learnt; Donald’s businesses not only failed, but were built on the belief that they would succeed with nothing to back up their potential success. It makes me question everything!! But it also makes me admire him a bit (I don’t know), it really makes me wonder how much we truly are capable of.

If a moron became famous by just calling himself a billionaire, then why haven’t I done that yet? Honestly, what happened to honesty? What happened to integrity? Good honest work? Why bother, if all you need is people to believe that you’re right, that you’re educated, that you’re apt, that you’re powerful. Like the Disney fairy, Donald captured his audience, despite his flaws, the simple idea of this guy in the white house makes for an interesting reality TV show. I’m actually surprised the Kardashian’s didn’t step in and take over the white house to turn it into the new IT TV show.

It’s actually quite disturbing how similar Tinkerbelle and TinkerTrump are from each other. The Fairy was constantly jealous of any girl who’d get close to Peter, she would throw a temper tantrum until someone payed attention to her. If Donald Trump isn’t on the news somehow, he’ll find a way—he’ll find someway to be talked about in hopes that he will live up to be his father—outlive him. Tinkerbelle is to Peter, what Donald is to his father, and he might not even realize it. He seems so lost in himself that it must be hard to dig yourself out from your ever growing ego.

You have to give him a little bit of credit though. I mean, he did accomplish everything he ever wanted—multiple businesses, celebrity recognition, and he is currently the President of the United States. Sure, his businesses mostly failed and ruined people’s lives, and his TV show was 100% staged classic American reality TV drama, and he’s been the most absurd president in the history of The United States..but he did it… In his eyes his crooked reality is a dream come true. Isn’t that what we all aspire to do anyway? Don’t we all just want our dreams to come true?

Most of us will wish and pray for our dreams to appear without us realizing it, through that process we may learn a bit about ego, and letting go of it. We might also learn things about ourselves that uncover our real dreams and desires, we come to realize that fame and money are not the solution to find happiness. This is a healthy path to take, and the most common one for all those dream chasers. Donald on the other hand, was born wealthy and needed no distraction from his artificial dreams. He got what he wanted at the expense of learning anything about the meaning of life, or the meaning of being human.

He lives his own kind of reality, and he is validated everyday we continue to clap away his success. It’s of our own making, our media, our attention towards him that put him where he is. Donald knew what he wanted and how to get it, despite anyone he had to step over or sacrifice. He set his target and he did not stop until reaching his dream of having the world wrapped around his finger. He manipulated the system, once a lizard business man, now the president. To say that he lives in the same house that George Washington, Abraham Lincoln, and Obama—like this is unreal! I suppose if everyone lived their own reality at the level Donald lives his, we would all be confused.

We are all so different, and unique and completely lost. Donald, I feel sorry for you for reasons you will never care about because you don’t focus on what you can't have; you focus on how to get what you want. It’s crazy how real he has made his dreams come true, and in some twisted way we should all do the same.

Remember Tinkerbelle? Yeah, she cried to be the center of attention, and was self-conceited and a little brat, who in the end got what she wanted. She charmed everyone with her fairy dust and beauty and tenderness. She fooled the crowd into thinking that keeping her alive was a logical ending to Peter Pan, when she was actually closer to being the enemy than the hero. Donald’s made-belief billionaire tittle was his fairy dust, the fame that he created for himself served as his charm and eventually won America over. He made us believe that his success was the right way to end the story. By us I really only mean his supporters, I am not included.

I guess what I’m trying to say is; Trump, I get it. I get how you did it and you have forever validated the Tinkerbelle Effect, but I still don’t respect you. For reasons I share with most of the world, I stand on the side of honesty and integrity. Maybe these values will leave me poor and unseen by anyone, but for those who do see me at least will know me as a respected human being. I get it, you did it, congratulations, and what a shame that we all fell for it.