The First Amendment and Women’s Rights

by Iris Harris 3 days ago in controversies 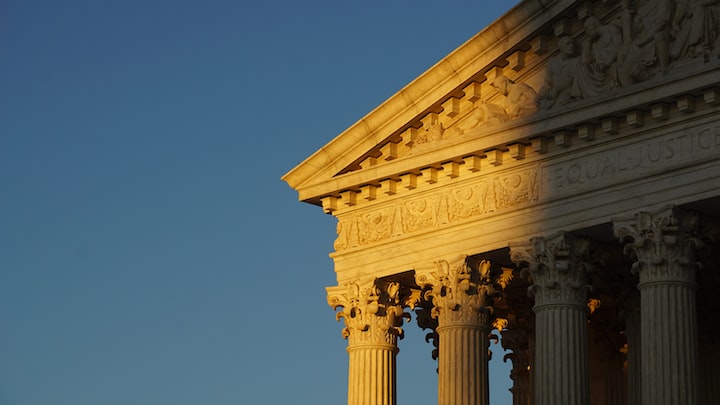 Photo by Ian Hutchinson on Unsplash

The first amendment of the constitution allows free speech, but it also allows freedom of religion. According to constitution.congress.gov, James Madison’s proposal for religious freedom was,

“The civil rights of none shall be abridged on account of religious belief or worship, nor shall any national religion be established, nor shall the full and equal rights of conscience be in any manner, or on any pretence, infringed.”

What Madison wanted for our country is simple: religious freedom. The ability to study any religion Americans feel best meets their moral needs. Madison wanted a country with a diverse religious foundation and not governed strictly by one.

Fast forward to the 21st century. America is a country that continues to use the belief of one religion to govern our laws. Case in point: Roe vs. Wade.

Recently, it has been rumored that the Supreme Court of the United States (SCOTUS) is planning to overturn its decision on Roe vs. Wade, making the legal decision on abortions up to states to decide. What is their rationale for overturning an important decision? Who knows. Could it be related to the belief that abortion is considered “taking a life” by those with strong religious views, otherwise known as “Pro-Life?” They have many arguments to support their rationale for prohibiting abortions.

Pro-Life Argument 1: If a woman decides to engage in sex, then she should also accept the consequence of a pregnancy, whether planned or not.

In a conservative world, women are held to a different standard than men, and it is very clear with this statement. Women should not engage in sex because it could lead to a pregnancy. Women should only have sex with their potential life partner to avoid this dilemma. Meanwhile, men are still allowed to have sex with multiple partners and suffer little to no consequences for their sexual choices and actions. If a man impregnates a woman, he can shrug off the responsibility, it’s not his body after all. Therefore, women must provide any and all contraceptives to avoid the pregnancy (or best yet: remain abstinent). This “belief” that women need to reserve their bodies for men is an old way of thinking. Women should be allowed the same sexual freedom as men.

Pro-Life Argument 2: It’s God’s will for women to give birth and carry a life.

Does this infringe on the first amendment? People are basically using their religious belief to dictate what is right and wrong for another person. If your religion claims taking an unborn life is wrong, then you should follow your belief for yourself, not impose that belief on others. Americans continue to forget that we are supposed a country with a variety of religious beliefs. America should ensure laws are implement fit the needs for all people, regardless of religion. In the case of abortions, the law should not be changed to restrict, but remain to allow this practice for those who need it.

Pro-Life Argument 3: A fetus is still a life, a mother should not have the right to end that life.

Most conservative government officials will be the first to restrict abortions claiming the fetus is still a human, while they continue to fight for the right to bear arms and refusing gun control. In other words, if you are a woman, you are not allowed to end the life of a fetus, but you do have the right to shoot a person.

Furthermore, this argument continues to ignore victims of rape and health conditions where the mother may end up losing her life if she continues with the pregnancy. Are we, as a country requiring women to not only give birth, but also raise a child they conceived during a sexual attack? It seems with this argument, that appears to be the case.

Lastly, if a woman is not allowed access to abortions and expected to give birth, what happens when a mother is unable to care for the infant? The child is taken from the state and the state becomes responsible for the well-being of the child. Children in foster care are not guarantee a healthy upbringing either. Therefore, banning abortions could mean more financial stress on governments to raise children that their birth mother is unable to do.

Science may claim that a fetus is still life, but human rights are for all people. Denying women the right to their own body violates their right as a human. She should have a choice to decide whether she wants to give birth to a child or not. That must not be a decision the government makes. Furthermore, justice is unclear. Ideally, if justice were clear then this would not be an argument. If justice were clear, then the second amendment would be alter to preserve life and not to take life. Allowing those the right to bear arms and use those weapons as a form of defense infringes on the right to preserve life.

As long as men are allowed to procreate without consequences, then women need to have the right to abortions because there will always be men who are unable to control themselves. Additionally, America need to stop imposing a religious belief into the law. The law needs to be fair and applicable to all Americans regardless of their religious backgrounds. Finally, it was Ruth Bader Ginsburg who said during her 1993 Senate confirmation hearing,

“The decision whether or not to bear a child is central to a woman’s life, to her well-being and dignity. … When government controls that decision for her, she is being treated as less than a fully adult human responsible for her own choices.”

No woman should be treated less than human and with the overturn of Roe v Wade, that is what SCOTUS is implying. A woman, much like a man, should have the right to do with her body as she chooses.

More stories from Iris Harris and writers in The Swamp and other communities.