The 2020 Campaign has Changed for Donald Trump

by Peter Carriveau 2 years ago in trump
Report Story

How Criminal Tax Evasion, an Awful Debate, and a Positive COVID test will effect the outcome 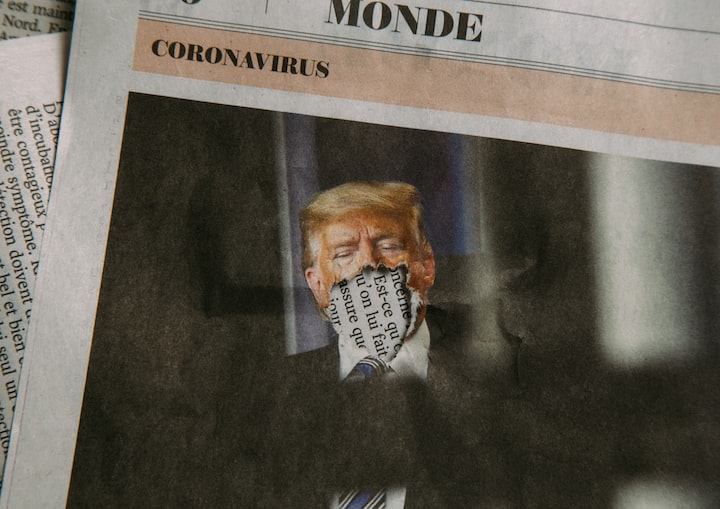 So, it finally happened. In one week we have seen what it looks like to have the curtain pulled back to reveal the feeble reality of our current president. There was always an element of showmanship and bluster that allowed Trump to be an unstoppable totem to his followers and an oppressive boogyman to most of us living in America. I say most of us because the man has never seen his approval rating go over 45 percent for the during his presidency. Let's take a look at Trump's great week.

Donald's week started with a damning story about criminal tax evasion that should surprise no one. Grifters are gonna grift after all, and say what you will about Trump, he has proven to be one of the best hucksters in the game. Finding out that he lied and cheated to evade paying federal income taxes was like finding out the moon wasn't made of cheese. We knew it probably wasn't, but setting foot on it really sealed the deal. Trump didn't even pay any taxes for most of the last 15 years, and when he did, he lied to make sure that he paid as little as possible. He paid more taxes in India than he did here in America, which he professes to want to make great. This shows flaws in the tax code, but it also a man who will do anything to escape responsibility or anything echoing an ability to share the burden that so many Americans feel the weight of. It's not his job to pay taxes after all, that's for the rest of us suckers to deal with. Trump's not the only one, Jeff Bezos does the same shit, but he is not the President. The New York Times report also showed just how indebted he is to certain folks, putting him in a uniquely compromising position to be controlled by outside interests.

The week did not get better for the fearless leader when he made a mockery of himself at the first presidential debate of the season. Displaying all of the characteristics that even his own supporters can't stand, it was a clear display of just how far the country has fallen underneath his lack of leadership. Trump was the asshole dinner guest who loves to hear himself talk when no one else is seeking it. He yelled, interrupted and spewed hot, white grievance for 90 minutes. Of course, none of this is new to anyone paying a sliver of attention for the last four years, but standing next to Biden, the contrast could not have been starker. It was undeniably ugly to anyone with eyes. Folks tried to both sides it or explain it away but all of that is bullshit. Joe Biden did not shout and interrupt in any of the Democratic primary debates, though they did get heated at times. No, the shit show of the first debate was purely Trump.

Of course he played it off as going great for him because weak men equate domineering with strength. They do not understand what speak softly and carry a big stick means. It is beyond them to grasp the subtleties of leadership in that manner. Teddy Roosevelt understood it and though Trump may think he is the best president since Abraham Lincoln, that comment is laughable at best. Trump also played up his cozy relationship with right wing fascists and white nationalists that has been a corner stone of his presidency. Emboldening them once again with an inability to hit what amounted to a political whiffle ball, he could not condemn white nationalism because he needs their votes. It is the same reason he said there were good people on both sides in Charlottesville. Last time I checked, Nazi's have never been, nor never will be, good people. Let's not forget the wink and nod that came with reweeting one of followers driving around a retirement community with a white power flag. These things always end up in the spin room to try and polish the turd, but the dregs that make up the white supremecist ranks always take it as a coded message to them. Much as the QAnon folks do, another group of people who will spin anything he does into gold like fucking Rumplestiltskin does with straw. If anything has become clear during these dark four years, Donald Trump will do anything to win, even if it tears our country in two.

The week ended much as it began for Trump. After a hate filled rally in a shockingly supportive Duluth, Minnesota, he tested positive for the very virus that he has sought to downplay for so long. The greatest failing of his failure of a presidency has been his inability to lead during the COVID pandemic which has contributed to the deaths of over 200,000 of my fellow citizens. By the end of the year we may have lost as many folks as we lost soldiers in the entirety of World War Two. The mantra of the politics of opposition runs deep in the GOP, illustrated by opposing the ACA with no viable alternative, but it has bled into every aspect of American life at this point. His refusal to promote mask wearing, a simple task that DOES NOT violate the constitution in any way, has led the virus to spiral out of control while he tells those that somehow believe him it will simply "go away". Nothing hard is done without work and if there is something Trump knows nothing about, it's work. Just ask his caddy, Lindsay Graham.

Trump catching the virus that he has so long called fake, a hoax, or not that bad, even though it is documented that he knew better, will have an effect on the rest of the campaign. The next debate is a town hall format which involves a risk factor due the number of everyday folks that will be in the audience to ask questions. The format suits Joe Biden, a man who has no problem talking to normal Americans on a human level. If the debate even happens will remain to be seen depending on how well Donald Trump combats the virus. It will most likely not ravage his lungs and shut down his organs like it has for so many of my fellow Americans, nor cause a blood clot to travel to his brain and induce a stroke. With the best medical care available he will also probably escape the long term, possibly lifelong, damage that COVID wreaks upon the systems of almost 30 percent of the folks that get it. I doubt that a tube will need to be forced down his throat to keep his lungs from failing.

Hopefully though, no matter the outcome of Trump catching the virus, it will somehow impart a shred of empathy in a man who seems to have none. A man who has called dead soldiers "losers", mocked disabled Americans, and demonized the most vulnerable among us. He is a weak bully after all, and weak bullies never punch up. If his last rally in Duluth is any indication, filled with unmasked folks who are either too dumb, ignorant, or selfish to give two shits about protecting those around them, I expect things will only get worse. I've spent a lot of time in Duluth and it is a wonderful city, but what was on display was anything but that. He touted his debate performance and once again flirted with violent insurrection to keep his power. He excoriated refugees, people who want nothing more than a safe life in a country that they thought held opportunity for them. He equated minorities with the ruining of the suburbs. I could continue on, but his hateful garbage spew does not need more of a platform than that of the President of the United States.

Those ideas will not go away if Trump loses in November, but it will be proven that America does not have to be that place. After all, we are just scant few years removed from electing the first black President. That hasn't happened in other countries that seem much more tolerant than our own. Not in Canada, not in the U.K, and not in France. We, the People did that right here in the United States and I think it's time that we reclaim that mantle to show the world exactly what compassionate, strong leadership looks like. I fear to think what will happen if we don't.

Writer of many things who likes politics, comics, and vintage video games. When not writing, Peter likes spending time with his beautiful partner Angelica, and our two daughters.

More stories from Peter Carriveau and writers in The Swamp and other communities.