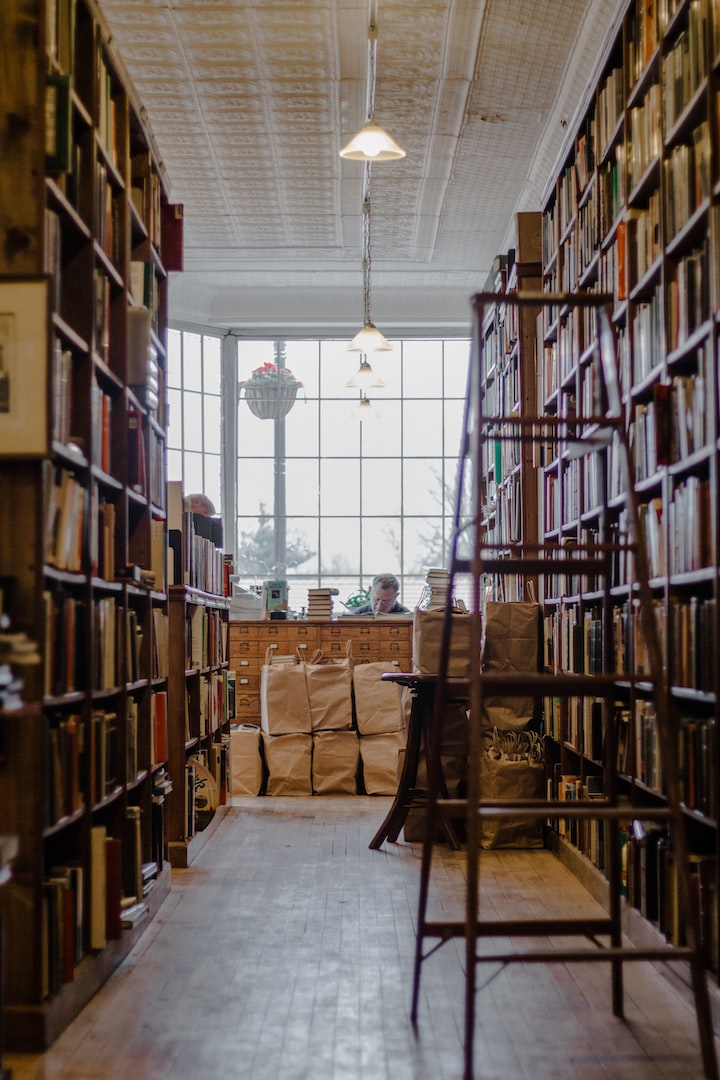 Photo by hannah grace on Unsplash

He looks up from his paperwork. Moving shadows from the street randomly interrupt the sun’s rays. On days like this, as his focus shifts from desktop to window, he easily imagines himself a lone figure at the centre of a zoetrope; the world beyond the plate glass flashing past: slowly coagulating into one coherent image.

Without warning, the scent of violets erupts from nowhere. He reaches forward and quiets his radio, the better to concentrate on this floral emanation, familiar and so shocking. Accompanied only by the rasp of his breathing, a memory thrashes up from the depths of his temporal lobe. A denizen like this is a rarity.

The fragrant woman, surely a woman, is out of sight past Travel and browsing Philosophy & Psychology. He must apologise for his lack of manners and rises to greet her.

But the shop is devoid of customers, male or female. Making his way back from the shelves, he detours to the heavy front door, opening and closing it hastily: the ancient bell is in full working order. Checking his watch, he flips the sign over to "zatvoreno" - closed. Scarcely two minutes have passed since the abrupt assault on his nasal passages. His thin lips purse to the right in silent admonishment at their owner’s foolishness. The radio volume is restored.

Within moments of returning to his calculations, the written entries before him begin to jitter and jive in time to Charles Mingus on the radio. By his reckoning, Love Chant is about half way through and as Jackie McLean’s alto sax kicks in, the vibrating columns and rows shimmy upward off the ledger. He isn’t sure if it's the violets again or the sun shifting behind the silhouetted figure inside the door but his attention is drawn from the curious murmuration of numbers and letters.

He slumps back into the chair. The air sighs out of his scarred lungs, a smile creasing the planes of his old face.

Almost running he greets the woman he has not seen since she was lowered into the family plot nearly twenty years ago.

A passer-by glancing in spies a moustachioed elderly gentleman nodding off after a long day. Dressed immaculately & with one empty sleeve pinned to the shoulder, short white hair glowing under a bare bulb on the back wall, his fountain pen tumbles to the floor.

Between bouts of tuberculosis, he started school at nine & though his first year was difficult, school was transformative. The headmaster championed Gavrilo & presented him with a prize at the end of that year – a collection of proud Serbian poetry! A labouring farmer, his father nonetheless revered the written word, had read to Gavrilo & taught him to read at an early age. Father always sang – mostly nationalist ballads – while he worked the barren fields. Gavrilo knew all the words.

Quiet & devoted to family & country, Petar Princip supplemented his income delivering post around Obljaj and its environs. As he waited for him to return from his journeys, Petar’s second son sits in the barn’s roof space, a book propped on his knees. Not allowed a lamp near the dry bales, he strains to see the words as evening shrouds the farm in its familiar embrace and soon his father’s rasping tenor grows louder on the lane winding between the fields.

A loner by choice, teenage Gavrilo kept studying & left the farm for high school in Sarajevo – living with his older brother. This headmaster was a tyrant – inducing a debilitating stammer in the teenager but also inoculating him against abuses of power and authority. He was fast becoming a revolutionary-in-the-making and was expelled for inciting, some said coercing, fellow students to demonstrate against the Austro-Hungarians. Initially rejected as a volunteer fighter against the Turks due to his diminutive frame and poor health, thoughts of following in Bogdan Zerajic’s footsteps impelled Gavrilo. In 1910, his hero Zerajic, took his own life during an attempt on that of the Austro-Hungarian governor of Bosnia-Herzegovina.

Staunchly apolitical, Marija ‘Nana’ Princip had not raised her sons to accept that which got in the way of one’s dreams; eventually another commander was sufficiently convinced by Gavrilo to send him to a training camp. In 1913, Austria-Hungary declared martial law in Bosnia stifling all Serb cultural and educational institutions. The following year, Franz Ferdinand’s visit to Sarajevo was announced and Gavrilo stepped forward to carry out his duty.

The grenade went off but missed its intended target. Cabrinovic, who inexpertly lobbed the device, duly swallowed the cyanide and jumped into the river. The pill was old and didn’t work. In the Sarajevo summer the river Miljacka was a mere trickle and the hapless Cabrinovic was arrested, albeit vomiting copiously. The unmitigated failure of their plan lay in tatters like the pride of Sarajevans under the yoke of the Hapsburgs and their collaborationist donkeys.

The motorcade was long gone. Gavrilo turned his back on the gentle wind gusting off the Latin Bridge and crossed Appel Quay. The cooling breeze of moments ago just a memory, the midday heat sapped the last of his zeal until he gained the shadows and made purposefully for the bookshop three doors up from Moritz Schiller’s Bakery.

The bell on its metal spring tinkles as Gavrilo slips inside the bookshop. A devotee here since high school, he is redeemed by this hallowed space; his spirit cleansed – borne aloft by the congregation of codices and pamphlets, blessed by the compendia & periodicals.

Easing a black-covered booklet from between its snug shelf-fellows, he nods at the understated beauty of this supple, round-cornered object fitting neatly in his hand.

Spilling onto the pavement, the bookshop’s customers join the throng. Gavrilo’s heartbeat lurches: ostrich feathers on a hat, swaying above the growing melee. Stalled in the road, an open six-seater Gräf und Stift Double Phaeton and there, picked out in a puddle of sunshine, the occupants – Archduke Franz Ferdinand, his wife Sophie, the Governor - General Potiorek and the driver clearly visible.

As if Gavrilo is underwater, the crowd noise drops away and he is acutely aware of his heartbeat.

In slow motion, Potiorek—puce & gesticulating energetically at the driver—glances with a simper at the implacable Archduke. He turns back to fire a staccato volley of orders & spittle into the ear of the driver struggling to restart the car.

Oblivious, the Archduchess occasionally waves limply into empty space. Momentarily, Gavrilo fancies himself in the guise of a wolf approaching prey, entangled and bleating in a thicket.

Before reaching into his inner coat pocket to retrieve the FN M1910 pistol, Gavrilo swaps the small book he’d forgotten into his left hand. As he does, his thumb snags an elastic band encircling the cover and flips it off revealing the contents. He glances down and all thoughts of the gun are immediately dismissed. The pages are blank ivory vellum, but what pulls our would-be assassin up short is not that he has picked up a notebook, but the neatly stacked pile of Hungarian Krone banknotes nestled in the hollowed-out heart of this mysterious item. He has never been this close to so much money.

Gavrilo pushes the Krone back into their secret repository, refastens the black elastic and exhales in wonderment as he glances up. His hearing returns like a diver regaining the surface. The crowd now have their backs to him, clapping and whooping. The driver has found the correct gear and the big Gräf und Stift is already accelerating down the Quay. His chance to extinguish an architect of Serbian oppression has come and gone in a blink.

Returning to the bookshop he darts from shelf to shelf, picking out books long coveted but never affordable, among them Peter Kropotkin’s The Conquest of Bread, William Morris’s News from Nowhere and Dostoevsky’s Demons. He remembers to pay for the notebook.

He expects to hear loud knocks on his brother’s front door and shouts of Policija!! at any moment. Upstairs in near darkness, Gavrilo opens the black notebook—newly printed, genuine Krone—thirty 100Kr notes, fourteen 50Kr and three 20Kr. In the bottom of the surgically eviscerated journal nestles a tiny yellow envelope. Someone has taken the time to seal the flap but inside are nine 1Kr coin, three 20 fillér and seventeen 1 fillér coins.

No police come for Gavrilo Princip that night or any night. Cabrinovic holds his tongue and is eventually judged to have acted alone. A year later Gavrilo loses his arm to the constant unwelcome shadow of his tuberculosis. He makes for a bad patient but convalesces well: numerous extended stays in Swiss sanitoria aid his recovery. In the cold, clear November air he sits on his balcony overlooking the mountain resort of Davos. Europe is peaceful. The conflagration threatening the continent never materialised: instead of war, prosperity broke out. Turning the empty black journal over in his hand, a snow flurry is driven against his cheek. A stray sheet cut from the book’s concavity flutters onto the blanket over his knees and Gavrilo peers to read the neat hand writing on the reverse:

With little trust in banks but a keen eye for a good investment, Gavrilo returns to Sarajevo with renewed purpose and takes well to the world of the monied. Compounding the original 3,779.77Kr he rapidly builds a sizeable fortune & his stammer recedes in indirect proportion as he exhorts the philanthropists of Sarajevo to help fund his women’s hospital.

With some shrewd deals, the means to make his dream a reality of stone and wood and glass is realised in record time. He dedicates the new building to Peter Kropotkin who expounded so eloquently on the 'Right to Well-Being for All' and spurred Gavrilo on when all seemed lost. A labour ward is named for his mother, the original inspiration for his endeavours. Under the diligent care of the staff at Kropotkin Maternity Teaching Hospital in Sarajevo, infant and new mothers’ mortality rates plummet among the working class. The hospital is soon a healthcare phenomenon in the Balkans and beyond.

In midsummer 1945, Nana Princip passes from this world to re-join her husband Petar and the six infants she lost, some before they were even weaned.

Only ever married to his humanitarian ventures, Gavrilo approached his advancing years with a sanguine air and if he felt lonely it was never obvious. Handing the reins of his foundation to men more energetic than he, Gavrilo eventually stepped away from the boardroom. When his favourite bookshop three doors up from Schiller’s Bakery on Franz Joseph Street came on the market, Gavrilo did not dither.

He has the bell above the door restored but little else changes when he takes over the bookshop. Every day is a joy, cloistered by his beloved books. He ventures from behind his desk to chat with visiting bibliophiles—when the mood takes him. Ordinarily though, he is most happy at the centre of his zoetrope, the lone figure in the gloaming: staying alive & doing good.

The Charles Mingus Big Band sound is drawing to a close but the bookstore’s proprietor is no longer listening: he is holding tight to Majka’s hand. Smiling at each other in silence, they stroll, in an aura of violets, towards a modest cottage in Obljaj village.

More stories from Lann Niziblian and writers in The Swamp and other communities.