by Nagisa K. 8 days ago in activism 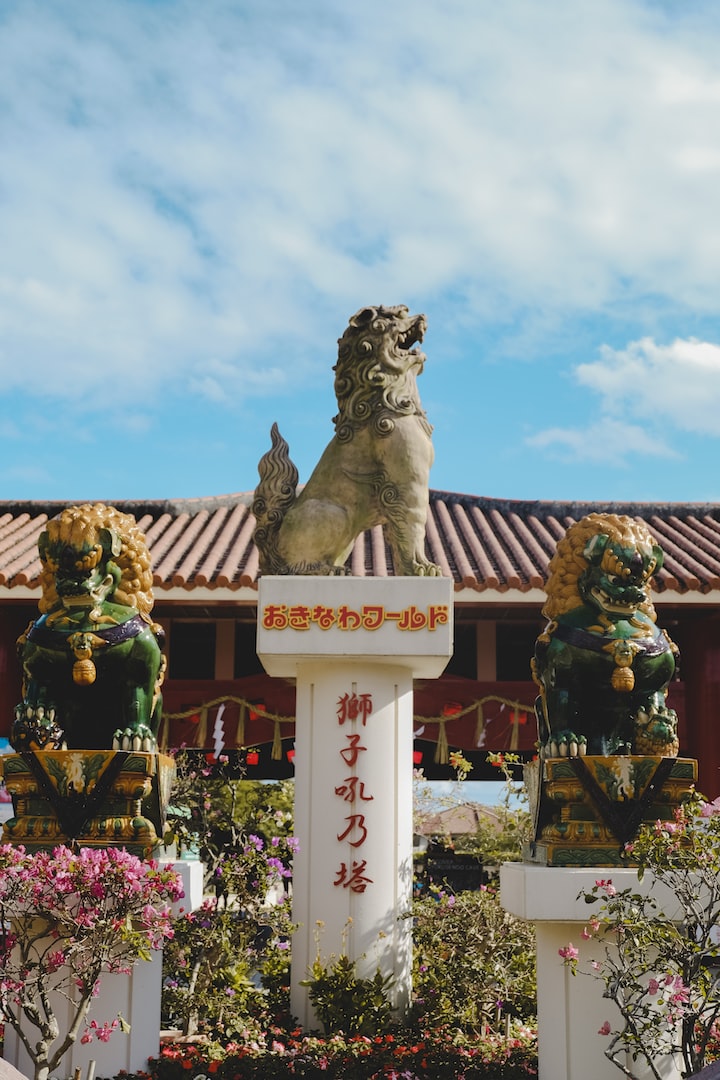 Photo by Skaterlunatic on Unsplash

June 12, 2020 – The Okinawa Association of America posted a statement in response to the then-going George Floyd protests, declaring solidarity with marginalized communities. In order to make good on their word, the group began organizing yuntaku (talk-story) Zoom events called the "Afro-Okinawan Dialogues." I huffed at “solidarity” but loved the vision: Okinawans of Black or African descent coming together at an intersection of art, music, language, culture, and racial identity to amplify Afro-Okinawan presence in the world.

I usually scoffed at labels, but this one readily sank in, as though quietly validating my past struggles with my own identity. Though my parents had taught me to declare my mixed race with pride, the long nightmare called public school never let me forget my “otherness.” Not that my peers needed to do much—my extreme sensitivity and introversion contributed enough. If any of them kicked me out of their circles because of my race, they never had to admit it.

After all, discrimination from two fronts was almost too easy. I heard it in teachers’ snappy tones to me versus their sweet, nurturing tones to others. I felt it in my braids people begged to pull and touch. A mom volunteering as a yard duty sneered at my bento box and screamed, “Ew, fish!” before walking away. A fourth-grade crush biked past me cackling, “Nigger!” and said “it was just a joke” when I confronted him later. A family acquaintance shook his head at me and said I “talk too pretty for a Black girl.” My good grades were apparently thanks to my being half-Asian, but I remember more than a few baffled looks from members of Asian student unions.

Some even believed I’d made up Okinawa, so I took it upon myself to educate my peers. For almost all my classroom presentations, I chose topics relating to the history, geography, arts, food, and culture of Okinawa.

Except even the core teacher who assigned one such project gave me a dubious look and said, “I’m not sure you’re going to find enough information about that. If it’s part of Japan, why not study Japan instead?”

“Because I’m not Japanese,” I replied. “I’m from Okinawa. I want to learn more about it.”

Mid-presentation, as I explained that Japan had forcibly annexed the Ryukyu Kingdom during the Meiji period, I saw confused frowns as well as some eye-rolls.

“So Okinawa is Japan. That means you’re Japanese.”

“No,” I explained again. “Okinawa was its own kingdom. We’re a different people.”

Though explaining my racial identity should never have been my responsibility—especially as a middle schooler—I preferred giving those mini-lessons over being treated like some strange creature of the beyond. Sure, having to explain the apparent enigma of my existence to every new person I met did no good for my then-budding depression. But I did cultivate some level of understanding in my peers.

I mean, the conversations about me were no longer about what I was. Those debates shifted to my birthplace and the new conundrum of my status as an American. Born at the U.S. Naval Hospital in Okinawa, was I eligible for American presidency? What about my sister, born in the States? If I absolutely had to choose—and I couldn’t say both—do I identify as more Black or Japanese? Why?

For a time, sick of the questioning, I resented my mixed race. I hated my Blackness and grew apathetic about my being Okinawan. I wished for an easy answer to shut down those conversations once and for all. Something to save me from the exhaustion of explaining my identity. Something that would stop people from calling me Japanese without questioning my Blackness at the same time.

This was around college, when I started paying closer attention to the weight behind words. I first experimented with analogies.

Then I experimented with compound words.

Japanese natives suggested their own from the mainland: “haafu.” But knowing about the discrimination suffered by the mixed-race kids called haafu in Japan, I refused to let them call me “not whole.”

Besides, I still thought, I’m not Japanese.

Nothing felt right, and the more I analyzed my own identity, the less I understood.

What the hell was I?

Worried, foremost. College-level ethnic studies courses had heightened my sensitivity to the brutality suffered by people of color. For every Trayvon Martin, Philando Castile, Elijah McClain, Breonna Taylor, or George Floyd, I worried that I’d next see my father’s name, or my stepbrothers’ or cousins’. As COVID hit, I worried that my mother would be the next Asian woman stabbed in the street or beaten in passing. The more I worried, the more I read up on current articles concerning violent anti-Black and anti-Asian discrimination.

And the more I read, the more I realized: these were stories looping on repeat, running parallel to each other over the course of this Earth’s human history. We all know them, these stories of systemic marginalization, dehumanization, and brutality by powers believing in their own supremacy.

We can place those stories side-by-side:

While the Satsuma clan of feudal Japan invaded the Ryukyu Kingdom and forced the region to become a vassal state in 1609, booming sugar and tobacco plantations brought African slaves to the Caribbean and Chesapeake regions.

While Japan officially annexed Ryukyu as the Okinawa Prefecture in 1879 and established a culture of segregation between “Japanese” and “Ryukyuans,” America had barely clawed its way through 14 years of Reconstruction. Black codes—later evolving into Jim Crow laws—began to take root, and white supremacy was already lynching Black men, women, and children.

1945 saw the Battle of Okinawa. Japan drafted hundreds of thousands of Okinawan civilians, including children, to serve as frontline nurses, decoys, and human shields. For those Okinawans, even speaking their indigenous language of Uchinaaguchi branded them as “American spies,” leading thousands to death by beheading. Then, in the face of imminent defeat, Japanese propaganda pressured Okinawans to commit mass suicides to avoid supposed American brutality. About half of Okinawa’s population died in those three months.

My mother’s father—my grandfather—was a boy at that time.

Meanwhile, the American civil rights movement was only just beginning. President Truman signed Executive Order 9981, calling upon the full integration of the military in 1948, but we can all guess how that went, right?

Parallel lines, like my parents’ histories on opposite sides of the globe, are theoretically never supposed to meet. Yet meet they did, and at one intersection between Okinawan and Black histories, I was born.

Still, I questioned my identity. Am I allowed to call myself “Afro-Okinawan,” as someone who for so long saw words like “solidarity” and “community” as empty and idealistic? Am I a viable representation of Black and Okinawan identities? Do I have to be a representative? Can I, even though I left Okinawa so young and had little interaction with other diasporic shimanchu? Is there a prerequisite depth of knowledge regarding the history that led to my birth—the intersections of Japanese and American colonialism—to declaring myself “Afro-Okinawan?”

For me, the answer surfaced when I watched the Okinawa Memories Initiative’s lecture on the 1970 Koza Uprising. That Japan and America call the event a “riot” versus Okinawan scholars calling it an “uprising” planted a seed of understanding in me.

Okinawa, invaded and occupied by Japan in the past, next saw heavy military occupation by America in the aftermath of World War II. Fueled by Vietnam War frustrations, America’s special brand of racism spread beyond segregated barracks, to the bars and businesses of Okinawa. Despite white-versus-black race wars involving more and more Okinawans, violence against them by American soldiers were more likely acquitted than punished. So when a minor drunk driving accident mirroring a prior hit-and-run occurred at Koza (today’s Okinawa City), just outside Gate 2 of Kadena Air Base, the pent-up frustration over years of occupation exploded.

Thousands of Okinawans gathered during the seven-hour event. Over 100 American cars and several buildings within Kadena Air Base burned. Okinawans—considered up to that point peaceful and pacifist by nature—actively hunted down, dragged out, and beat American servicemen.

There is no denying the violence of that uprising—that’s why America calls it the “Koza Riot”—but over that December 20th evening, Okinawan solidarity began ending their long-standing pacifist narrative. Horror, rage, relief, and accomplishment all surface in the photos and anecdotes regarding the Koza Uprising.

And just like some of the men, women, and children gathered around walking, singing, and dancing over the charred metal of American cars, I smiled.

“You did it,” I said. “Take that, White America. Imperial Japan.”

Merriam-Webster defines “uprising” as “a localized act of popular violence in defiance usually of an established government,” and adds that as they’re “brief” and “limited,” uprisings are “often immediately ineffective.” From the perspectives of America and Japan, sure, the Koza “Riot” was ultimately unsuccessful in ending American occupation or winning back Ryukyuan independence. Plus, how dare these people destroy American property and injure American soldiers, we must reject this violence—!

I raise to you that famous Martin Luther King, Jr. quote, “that we’ve got to see that a riot is the language of the unheard.”

Though I first saw that quote in college, I barely understood it when the Freddie Gray riots began raging through my father’s old neighborhood. But in this examination of Okinawa’s Koza Uprising, the puzzle piece finally fit into place. Okinawa calls it an “uprising” because in burning and breaking American establishments, Okinawans loudly proclaimed and proved their existence as a people—as proud, enraged human beings, as Okinawans, as Ryukyuans repeatedly marginalized and silenced by the colonial powers of Japan and America.

One seven-hour evening of burning, and Okinawa, for once, got its voice heard. That’s wild.

Meaning Okinawa’s uprising continues as well, and everyone who calls themselves shimanchu contributes to the movement. Many Okinawans call themselves Ryukyuans, acknowledging and remembering the kingdom of their ancestors. Some master the food, music, arts, and dance of Okinawa to pass on to the community and posterity abroad. Others toil to preserve the myriad variations of Uchinaaguchi, a language as diverse as the number of islands in the Ryukyu Archipelago. Still others navigate policy-making, calling upon both Japanese and American governments to reconsider the density of American military presence in Okinawa.

So I no longer question my identity, or whether I’m worthy of calling myself Black or Okinawan.

I am a unique—if not downright miraculous—intersection of histories, able to look to past, present, and future from two racial perspectives. My voice is born and continues from the riots of my ancestors.

My speaking gives power to my identity.

I am Afro-Okinawan, a descendant of Black slaves and Ryukyuan vassals.

Such is the will I—we—have inherited.

Afro-Okinawan, a fledgling writer on the path to publication!

Fiction and fantasy are my forte but I dabble in personal essays as well.

See all posts by Nagisa K. →