by Skyler Saunders 2 years ago in activism

The black race ought to realize their own selfish potential. 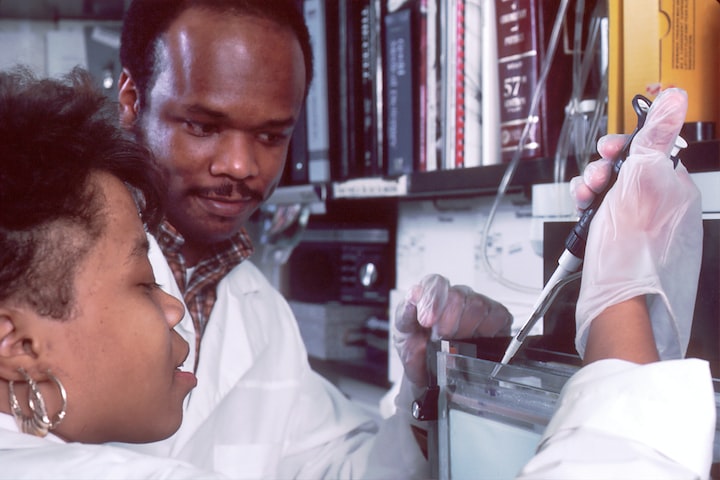 To see the destruction of racism is to see collectivism in its most vicious form dissolved. In the United States, the land of sweet freedom, the desire for the taste of liberty has soured on the black race the most. The ugliness of slavery created a kettle for the flames of injustice to continue to burn. That kettle was overturned during the Civil War but the blaze continues through the years.

The Jim Crow laws, neighborhood redlining and disenfranchisement among a litany of injustices continue to inflame the ground as the kettle of freedom spilled rights upon the blacks. But above that kettle swung the bodies of blacks lynched by the mindset of the idea of treating human beings like hogs, chickens, and cows.

Men, women, and children have had to endure the onslaught of being raped, shot, stabbed, hanged, bludgeoned, dismembered, set ablaze and crushed to death.

Through all of this, we can glean from the actions of the past and state the thought of...no more. There ought to be no more of this assault on the minds and bodies of black people. The black man and woman’s time on the American shores has been a mix of frustration and rage and joy and achievement.

The duality of the pain and triumph that blacks have encountered with the pursuit of happiness that was supposed to be secured to them since the birth of this nation, has been the experience up to this writing.

Blacks have fought for their intellectual wellness as well as their bodily health. It is the mind that has carried blacks from their savage start in America to their ability to apply their minds to inventions and innovations. They have been able to shift their focus away from yearning to taste a piece of the pie and seeking to develop their own ingredients to bake a cake of prosperity.

For blacks to elevate from the doldrums of racial strife and despair, they must remember that in order to attain true freedom, to upright the kettle and turn the blaze into a torch of justice, they must see that tribalism is the enemy. To band together based on the color of skin rather than the intellect is abhorrent. There is no such thing as thinking black, acting black or speaking black. The melanin content is not an excuse for racially motivated behavior. Blacks ought to not be proud of being black but of being conscious of their ability to think.

The thoughts that remain in the heads of the black race differ as much as skin type, hair texture and color, and other non-essentials. So why would there be any kind of idea that blacks should all think alike? The truth is that black people don’t have to wait on the rest of the world to reap the benefits of the kettle. That racial hierarchy should tumble down like the rain in Northwest America. Individualism is the only way to combat the sting of racism. To view human beings worthy based on their virtues, morality, and principles is the only way to get through the toxins of the racial divide.

Blacks ought to know that to let go of the unknown and unknowable would be the boon that the race has longed for through the centuries. Blacks ought to realize that the sense of overcoming struggle should be kept in this universe. They should view existence as an entity not touched by the hands of what lies outside of reality.

Altruism must stop. For all races and especially the black race, the ideal of putting others as the only consideration ought to be obliterated. Blacks should be selfish and possess the ability to unify only if the other people possess the proper amount of ethics. Blacks ought to know the difference between helping a neighbor based on his virtues as opposed to him just having humanity. It is not enough to bring in other races for blacks to just hum along and bang bongos.

Now, blacks ought to invite the other races in only if they are of good moral standing. They should not be passive and submissive to the weight of the outside races. There should be calls to build relationships not to end racism in private organizations. Racism should fall by way of the egoism that blacks and others should employ in all situations.

It is the ego that ought to prevent the kettle from tipping over again. Not to be confused with self-absorption, egoism ought to propel the black race to heights of grandeur. This does not mean that blacks ought to conquer other races but live the life of stewards over their own destinies. Blacks ought to take that fire and light their path to meet greater challenges ahead of them.

But it ought take the individualism and selfishness to carry the black race to planes of thought never considered before. They should be able to convey to other races that they ought to never forget their pain and anguish. They ought to never forget the rancor, ugliness and the depravity leveled against them. Some blacks may not even forgive. Remember, this is on an individual basis. Some might never be able to let go of the viciousness of the past. But that doesn’t mean that the others cannot include other races in their neighborhoods, their homes, their lives.

Each black person in America ought to be prepared for the change. They ought to know that their battle ought not be in vain. This is a change that ought to perpetuate the ideals often passed over and negated. Those luscious ideals ought to keep the blacks on the way to health and wealth.

For those blacks who want to see a shift in the treatment of people who share a similar skin color, they ought to champion this thought the most. To treasure the splendid freedoms of this nation, an individual must unlock one’s mind. In order to do that, the stale notions of the past must be blasted away like a cannon of truth. Because they are so pernicious, it is up to the blacks to continue to fight for their chance to hold an ideal place in America.