Pacifistic Activism in a Non-Pacifist Country

by C.R. Hughes 16 days ago in activism

Does Pacifism Work in the Fight Against Systemic Oppression in the U.S.? 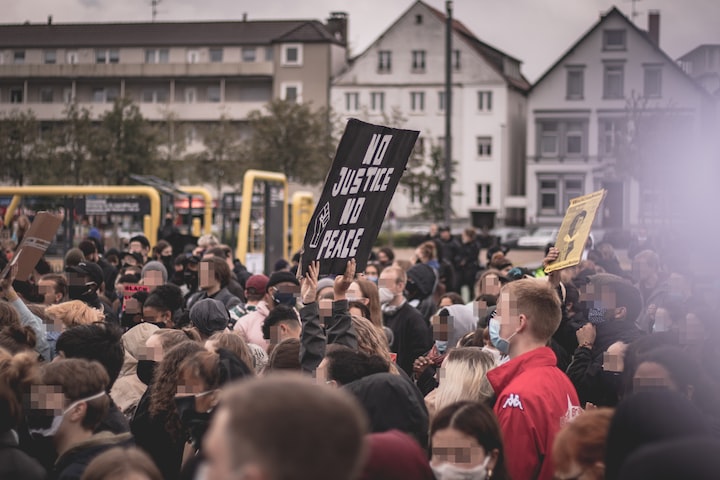 Photo by noah eleazar on Unsplash

The past several decades in the U.S. have been characterized by great racial tensions that have come to a boiling point in 2020. Amidst a global pandemic, a defining presidential election, and a rise in social media influence among Gen Z, the transgressions of our nation are in full view for the world to see. And just like in the 1960s, activists today are faced with the issue of whether they will choose to be a pacifist in their fight against oppression or seek justice and equality by any means necessary. In this debate, people are often driven by their morals in their decision making, but is pacifism a viable means of fighting against systemic oppression in a nation where our greatest achievements have been solved through violent means?

December 16, 1773, a group of American colonists took to destroying the property of the British in the Boston Tea Party. These colonists dumped out 342 chests of tea into the Boston Harbor, in order to make their voices heard to their oppressors. This was the beginning of the American Revolution and the beginning of a long history of violence and destruction that has allotted us as Americans many of the freedoms we have today.

In the 1950s and 60s, however, a different approach to dealing with oppression emerged with Martin Luther King Jr. As a Christian minister who was influenced by the pacifistic tactics of Gandhi, MLK made the idea of pacifistic protest famous for many Americans, but even he was hardly peaceful. The tactics of MLK were only successful by causing disruption and they were only hailed as being the moral higher ground when compared to the rhetoric and tactics of someone like Malcolm X, who believed that violence was justifiable in the fight for equality if it worked. And in some ways, it did work.

Martin Luther King's Montgomery Bus Boycott, March on Washington, and "I Have a Dream" speech, are often given almost exclusive credit for the Civil Rights Act of 1964, but without Malcom X, MLK's tactics would have been little more than just inconveniences for the white people of the time. When compared to Malcolm X, MLK seemed to the U.S. government to be less of a threat. Someone whose followers they could try to appease with steps in the right direction, while Malcolm X would not be satisfied unless the entire system that was in place was dismantled. And so the Civil Rights Act was passed. And later, both Malcolm X and MLK were assassinated, with recent evidence pointing to the U.S. government as the culprits.

The problem within the U.S., in many cases, is that only specific kinds of violence are seen as immoral. For example, war and death are not seen as being an immoral kind of violence, in the way that rioting and the destruction of property are. Within the Black Lives Matter protests, violence often comes in the form of rioting and property destruction. These two things are viewed by the public and those in authority as being immoral kinds of violence. Unjustifiable kinds of violence. And that is the problem with the conscience of the U.S. The fact that buildings hold more inherent value than the lives of some. The fact that buildings can receive justice before some human beings can. The fact that the government and those in charge often choose to act more quickly when buildings in a community are being destroyed in protest than when people in communities are being destroyed through poverty, policing, and an unbalanced justice system. And the skewed conscience of the U.S. is why these kinds of violence cause the kind of outrage that they do.

The point is that the U.S. responds to violence through destruction, and usually, only violence through destruction. No one is required to break store windows and set cars on fire for the cause of dismantling systemic racism and oppression. But those who don't should recognize that those who do are the ones making those in charge take notice of the cause. They're the ones who are making the effects of centuries of systemic oppression tangible to people who otherwise would overlook it. Does pacifistic activism work? In a perfect world, pacifism would be the only thing necessary to cause significant change, but in a country founded on bloodshed, destruction, and slavery, violence is the language that is understood the best. And only when pacifism is juxtaposed with violence, do the centuries-old systems in the U.S. start to crumble.