No, I Dont Want To Buy Your Black Lives Matter Or Martin Luther King Merchandise.

by Blue Dymond 4 months ago in controversies

Redefining The World View Of A Modern Day Slave 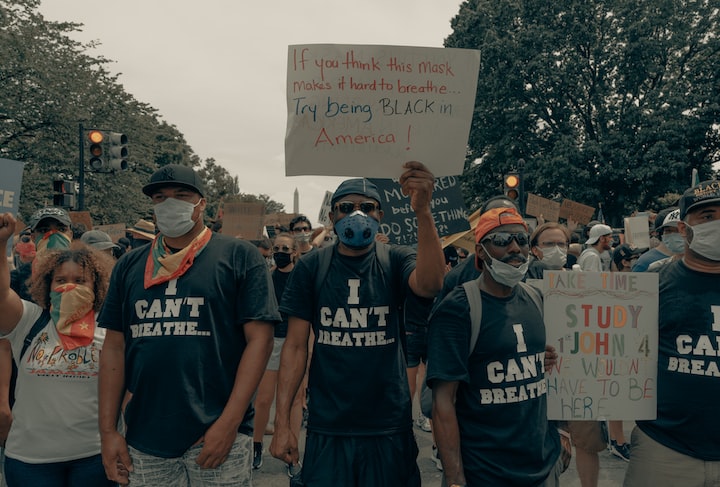 For years the racial injustice that African Americans have faced has been swept under the rug to be invalidated or ignored. We have been treated like nothing and then slammed for requiring common decency. As time passes and I see the world for what it is I also start seeing that everything that is given to us blacks has been solely to appease us in that time being. There are people who would say black lives matter only to also apply all lives matter in the same breath.

People who would agree that we've been done wrong only to turn and complain when a black earns a certain position in society that is better than theirs. The superiority, arrogance, and ignorance surrounding us is suffocating and WE CANT BREATHE!!

When Will The Change Begin?

There is a Martin Luther King Jr, street in almost every city. That changed nothing, There is a whole day honored for him. Still nothing. Why? Because their intentions were to appease us enough to stop the boycotting, marching, and riots happening at the time. The same way they tried appeasing us then is how they are appeasing us now its just instead of A Martin Luther King street its a Black Lives Matter one. Instead of actually trying to understand and change the inequality we face today they want to do the bare minimum like take black faces off of rice and syrup.

We Are Modern Day Slaves

That all goes to say that the same way our ancestors were slaves to their masters we are as well. We are still considered inferior to the white people around us, they can take our lives and walk free with no repercussions, and they make it so that we have to rely on them to provide the bare minimum, such as, jobs, clothes, food, and water. There are those who are going to read this and immediately disagree and I will tell you that it wont be the black people but the people in this country that only sees red, white, and blue!

Ask yourself, have you ever went into a job interview knowing that you weren't going to get the position over the white person in the waiting area with you? Have you ever been told that you weren't qualified for a position or "not what they are looking for" without explanation as to why? For those of you who own business', have you ever walked into a bank and been denied because of your skin color alone only for your idea to turn around and be profited off of by someone considered less of a risk? Everyday we as black people walk into a country having to sell ourselves in order to be seen and treated as equals only to return home with nothing. Everyday we as black people have to turn to the white people of our nation and ask if its okay to be us. Whether or not we can wear braids and African wraps in their place of business or in the education system. Whether or not we look harmless enough to walk in our neighborhoods without being killed because we looked dangerous. We are slaves to them and what they are willing to offer us, which to be blunt are scraps.

Profit Off of Our Struggle

The most insulting part of it all is that they disguise their understanding and want for change in t shirts that claim black lives matter and merchandise that emphasizes our culture and color. They strategically bring it all out when their is a protest going on and we as black people are marching and wearing our truth, during Martin Luther King Day when theres parades and talk of what used to be, and during Febuary when most parents and families are educating the young in how important and scary it is to be black.

You have major business' that all of a sudden find a voice to support us after one of our own is gunned down in cold blood. They claim to be providing money back into the black communities but then turn around and upsell the black lives merchandise right to us. In turn all the money that was donated for "our cause" was also given by "our cause".

So no, I don't want your Black Lives Matter shirt, or your Martin Luther King face masks. These business' profit from our struggle but then refuse to voice their support to the people that matter. They put a black lives matter banner on their website and then offer "black lives matter" collections on their categories, products, and videos as away to appease the inequality.

If they felt that black lives really did matter they would have gotten a black owned business and created a contract to sell the same merch in their store or they would have made sure that any profit off of the line goes back towards the community. If black lives mattered they would be making sure that those lives had the same opportunity as any one else to shop safely in their business without fear of being followed or discriminated against. They would allow us to be employed at their company safely and equally just like anywhere else.

You can be invited to a party and still not be allowed to dance. Understand that A lot of blacks are employed at business' just to meet their ethnicity quota but would never be allowed the opportunity to move upward or be promoted.

So to all of you major retailers, streaming companies, and other business' you can keep your merchandise. At this point it makes you richer and enslaves us longer. We are looking for change and we dont need your product to strive towards it!