by Katrina BG 10 months ago in humanity

Makeup can make us feel beautiful and allows us to express ourselves in many ways. But one of beauty's most popular ingredients has a dark side.

Mica is a shiny silicate mineral with a layered structure, found as minute scales in granite and other rocks, or as crystals. It's an unassuming mineral essential to modern life. It's been used in everyday products like insulation, paint, and even toothpaste.

Over the past few years the cosmetics industry has had a spike in the demand for shimmer in makeup. For example, highlighter is one of the products that has become very popular. Whether it's a simple makeup look created for an Instagram selfie or an extravagant look for a festival, mica is usually an important ingredient. Most of the worlds mica comes from India. The 2016 Thomson Reuters Foundation investigation revealed that it was being mined by children and had a deadly cost. It forced the beauty industry to take action. Companies such as Chanel, Estee Lauder and L'Oreal have said they will work with the mining communities in India to create a sustainable supply chain. Lush is one of the companies that has pulled out of mica completely. In fact, they now use synthetic mica in their products where there is more variety. 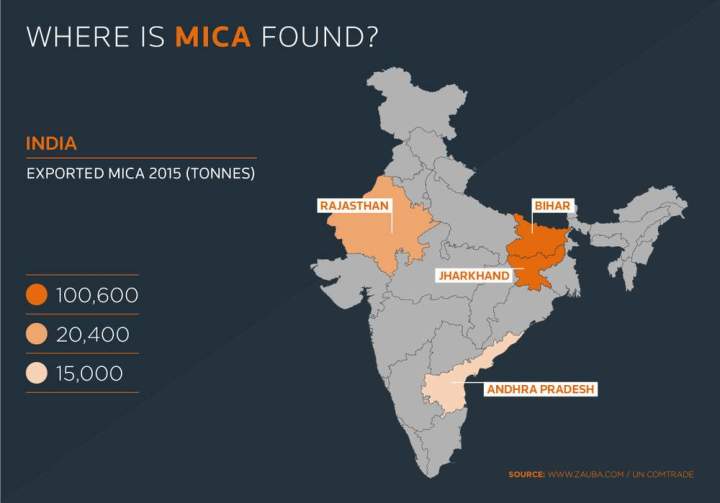 The mica industry is worth half a billion dollars and India is at its centre. It has the worlds largest and highest quality mica. Jharkhand is on of the mining states with reserves of copper, coal and mica. Illegal and unregulated mica mines dominate the trade in rural areas of this state. Lots of the mines are abandoned and scavenged. The others are run by illegal operators.

The children sift the mica through as it's mixed with gravel. Then they'll take the mica out where it is then taken to somebody who will ship it overseas. Many of the families don't have any other option, but to do this as they have to make a living. Some of the children started working in the mines at age five. After the mica leaves the mine, it is funneled into a process that conceals the fact that children ever had anything to do with it. Traders pedal the mica to intermediaries who often sell it under the license of a legal mine from another part of the country. By the time the mica is exported, its illicit origins have been stripped away. Unfortunately back in Jharkhand, it's impossible to escape the realities of the trade and the risks that go with it. For example cuts and broken bones, respiratory illnesses that can damage or possibly scar the lungs, and sadly sometimes death. It's estimated to be ten to 20 deaths that occur every month.

The National Commission for the Protection of Child Rights or NCPCR in India has been aware of the issue since at least 2016, when its governing ministry lodged a complaint. Refinery29 reached out to them and they said they where conducting a survey to understand the scope of the problem, and they sent them to the ministry that oversees their work.

I got lots/most of information from this video and you should definitely give it a watch.

Something is being setup in Jharkhand in a village being coined "the child friendly village." It is connecting parents to new income streams, so that their children don't have to work. More than 3,000 children have been rescued and enrolled in school. Funding comes through government services and private business support, including beauty company Estee Lauder.

I hope change continues to happen.

humanity
Katrina BG
Read next: New Mexico—It's like a State, like All the Others!
Katrina BG
See all posts by Katrina BG →