by Jeryn Cambrah 4 months ago in quotes 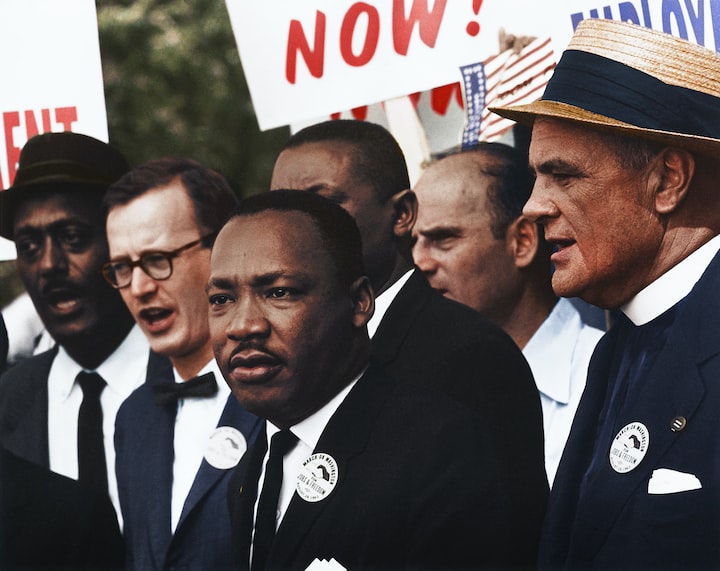 I drove two hours from my home in Carrollton, GA, at 6 am in my beat-up pick-up truck (affectionately named Lucille) and hiked up to the base of the mountain. As I stood beneath it, I was amazed at how gigantic and imposing it felt. This is what Dr. King was talking about.

I watched as speakers and worship leaders one after the other came upon the ginormous stage and glorified the God MLK spoke about in his speech. It was a nice concert. But it became more.

Two pastors, best friends for many years, came out next. They told their story about recently discovering that the Black pastor's family had once been owned by the white pastor's family. Then, with his family's singing bowl beside them, the two friends received communion together. It was deeply moving; I, along with thousands of other people gathered there, wept openly. On Stone Mountain, King's vision had been partly fulfilled.

"But not only there; let freedom ring from the Stone Mountain of Georgia!"

We often quote the first part of MLK's famous "I Have A Dream" speech but neglect the latter parts.

For Dr. King, Stone Mountain was a symbol of something larger. It represented a monolith of impenetrable hate; the monumental task of expelling racism from the South, from the U.S., from the world, and from our hearts.

Stone from Stone Mountain was used to create many of our nation's national landmarks. You could say racism is quite literally embedded in the makeup of our nation.

After the communion, the speaker instructed us to find a stranger and pray together. The kind Black woman behind me instantly grabbed my little pink hand without hesitation and pulled me near. We wept together, as we prayed for each other's families, lives, mental health, and more. When the prayer was over, we hugged good and tight.

Every part of the event afterward was moving and metamorphic. Racism, hatred, and division were addressed from many angles; prayers of repentance were offered on behalf of the nation for atrocities against Latina/o, Asian, African-American, Jewish, and more people groups. What began as just a cool concert became a revelatory and cathartic experience, forever bonding thousands of strangers. We transcended generations of hatred and oppression. Together.

On August 28, 1963, Martin Luther King, Jr. stood in front of the Lincoln Memorial in Washington D.C. and spoke those famous words. The base of the Lincoln Memorial is made from stone that was quarried and hewn from Stone Mountain. On August 25, 2018, I stood at the base of Stone Mountain, while hundreds of others climbed to its peak, to fulfill his words, even if only in part.

King's speech was not just wishful thinking or a plea for change. It was a foretelling and a declaration for transformation in the DNA of our nation and its people. In "the red hills of Georgia" on a warm summer day, I saw his vision come to life. I saw what he saw. We all did. We saw how possible it really was.

A lucid dream is one in which the dreamer has some level of control.

"I Have A Dream" was not just a speech. It was a prophecy. An oracle. The dream Dr. King had was a lucid one.

As we honor his legacy today, may we forever endeavor to fulfill it.

More stories from Jeryn Cambrah and writers in The Swamp and other communities.