by joshua murphy 2 months ago in controversies

the homeless population is on the rise in los Angeles. 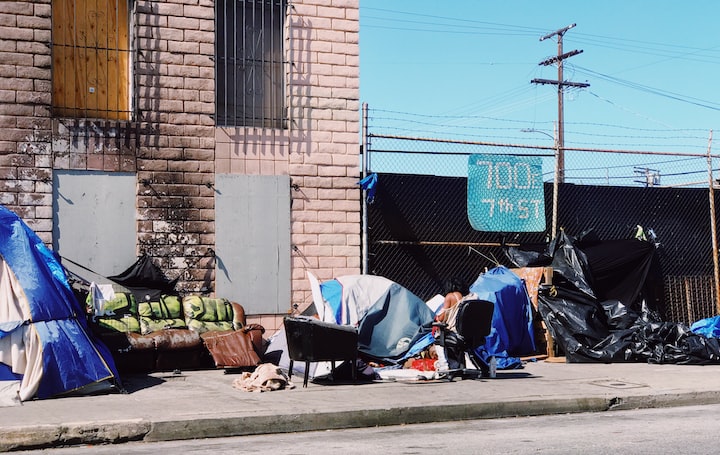 Photo by Brandi Ibrao on Unsplash

A tent encampment by the West Oakland BART station. Photo by Anne Wernikoff for CalMatters

How many people are homeless?

Are they local, or are they coming from somewhere else?

A welcome decrease in veteran and family homelessness

What about mental illness and addiction?

Other factors that cause homelessness

What is the state doing about homelessness?

What are Trump and the feds doing?

What are other places doing successfully?

What about outside-the-box solutions?

California’s most vexing issue is also its most shameful: the large and rising number of residents who lack a safe place to call home. In a state with vast amounts of wealth, more than 150,000 of its residents sleep in shelters, cars, or on the street.

The United Nations compared the tent encampments of San Francisco to the slums of New Delhi and Mexico City. Nearly 5,000 people live in the half square mile of Los Angeles’ Skid Row. And while the problem is most acute in California’s urban centers, homelessness is now a common fixture in many of the state’s suburbs and rural towns. State and local officials have pledged billions in recent years to help, but voters remain frustrated by a lack of visible progress.

President Donald Trump has wielded the state’s homelessness woes as a political cudgel, excoriating Gov. Gavin Newsom and the state’s progressive policies for allowing the country’s “best highways, our best streets, our best entrances to buildings” to be blockaded by people without homes. In a Christmas Day tweet, Trump repeated his threats of federal intervention if the state fails to fix the problem.

Here’s what you need to know about California’s homelessness crisis — including possible solutions.

151,278 individuals are homeless in California, according to the U.S. Department of Housing and Urban Development. That’s the highest number since at least 2007, and represents a nearly 17% uptick since 2018. The number of unsheltered Californians — living on the streets or in cars — has surged the past year. California is ground zero for America's homelessness crisis. About 150,000 people are homeless here, living in shelters, on sidewalks, in tent encampments, canyon washes, and under bridges in the Golden State, often in highly unsanitary conditions. Many blame mental illness and drug addiction for the soaring numbers, but experts say that is only part of the puzzle. The state’s severe housing shortage, which has forced rents to increase at twice the rate of the national average and put the median price of a single family home at $615,000, has also contributed to the crisis.

John Maceri, CEO of the Los Angeles-based social services provider The People Concern, said social safety nets, like affordable housing and job training, are all but gone, leaving already vulnerable people to fend for themselves.

“You reap what you sow,” Maceri said recently.

He was one of 300 volunteers who gathered in Santa Monica last week for an annual homeless count, part of a larger effort in Los Angeles County that spanned three days and covered thousands of square miles. Similar counts took place in San Francisco, San Diego and other parts of the country. With tens of thousands of people living on the streets of California, the homelessness crisis has become the state’s defining issue. For Gov. Gavin Newsom, the emergency had become so dire that he devoted his entire State of the State address on Wednesday to the 150,000 Californians without homes.

“Let’s call it what it is: It’s a disgrace that the richest state in the richest nation, succeeding across so many sectors, is falling so far behind to properly house, heal and humanely treat so many of its own people,” Mr. Newsom told lawmakers in Sacramento. “Every day, the California dream is dimmed by the wrenching reality of families and children and seniors living unfed on a concrete bed.”

Vulnerable to the charge that the problem has exploded under Democratic rule in California, Mr. Newsom, a former mayor of San Francisco, pleaded with — and at times admonished — legislators to take action.

“The hard truth is for too long we’ve ignored this problem,” Mr. Newsom said. “We turned away.”

Homelessness has become pervasive in California, from the rural North to the sun-kissed coastal cities, and it has exposed the stark inequality in the state, whose economy would rank as the world’s fifth largest if it were an independent country. Living in the shadow of the biggest names in technology — just a few dozen miles from the campuses of Apple, Google and Facebook — are hundreds of clusters of homeless people, in makeshift compounds that resemble some of the world’s most destitute refugee camps. California is home to some of the world’s toughest environmental and public health laws, but skyrocketing homelessness has created an environmental and public health disaster. The 44,000 people living, eating, and defecating on the streets of L.A. have brought rats and medieval diseases including typhus. Garbage is everywhere. Experts fear the return of cholera and leprosy.

And homelessness is making people violent. “We are seeing behaviors from our guests that I’ve never seen in 33 years,” said Bales. “They are so bizarre and different that I don’t even feel right describing the behaviors. It’s extreme violence of an extreme sexual nature. I have been doing this for 33 years and never seen anything like it. This tent camp is nestled between a freeway, rail tracks and a Burger King near the Fruitvale section of Oakland.

Homelessness is a vexing national problem, but nearly half of the country's unsheltered homeless live in one state: California.

Gov. Gavin Newsom has vowed to make to make solutions his top priority, calling homelessness in the Golden State "a disgrace." He's proposed significantly boosting funds for shelters, housing and support services and building 3.5 million new affordable homes by 2025, among other measures.

Newsom has also floated the idea of making additional housing and shelters a legal requirement, not a policy option, for California's cities and counties.

But there's widespread concern and confusion over how any mandate, if it happens, could actually work. And local governments are calling for details, flexibility and a more robust, coordinated strategy.