by Lizzy Clarke 2 years ago in activism

A Letter of Support and Introspection from a White Musician 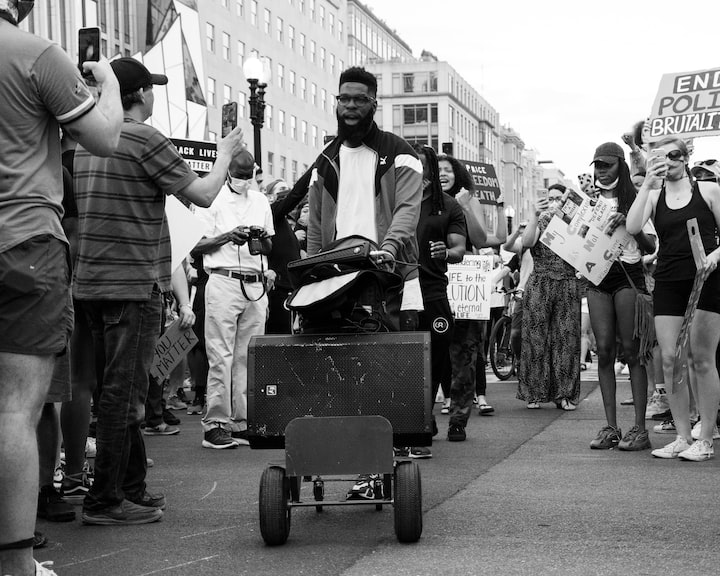 Photo by Koshu Kunii on Unsplash

(Oringinally posted on my blog lizzyclarkesinginglessons.ca/blog/blm)

This is only ever true. There is no exception to this basic truth. Black Lives Matter.

The deaths by police of George Floyd, Breanna Taylor, Ahmaud Arbery and so many others in the US have sparked a vital worldwide human rights movement. These traumatic events have forced the world to face the spectrum of racism that exists throughout society. From violent racially motivated attacks by police to micro-aggressions and unconscious racism. I've been moved, as many other white individuals have been, to check my own privilege and consider those good intentions aren't a free pass to stay silent. Saying you're not racist doesn't make it so. Appropriation is real and I am guilty.

As an educator and as an artist, I want to express my wholehearted commitment to the Black Lives Matter movement and to supporting artists and singers of colour in my studio and in my life.

I’ve assigned myself the task of researching, learning and listening. I’ve taken some time over the last few weeks to really, truly consider my own unconscious racism and bias. Where did I learn if from? How did I perpetuate it? What does it look like now? How can I unlearn it?

I have more work to do, but I wanted to share (with whoever cares to read it) some of the work I’ve been doing. So far, the work has fallen into 4 steps:

1. Acknowledge Racism at Home in Canada

2. As a teacher, acknowledge racism and bias in musical education

3. As an artist, acknowledge my privilege and identify my internalized racism

4. Continue to research, be a better ally, support and act.

There is an undercurrent of ignorance in Canada, as we often think of ourselves as immune to racism. As if we've solved it or as if we're above it. Cultural and systematic racism and oppression exists here, and we must address it. Police violence happens all too often in Canadian streets and in Canadian buildings. Violence against POC often goes ignored by authorities AND the public. Did you know the number of missing Indigenous women is somewhere over 4000!!! Though, there are no firm numbers on exactly how many women have gone missing because, for years, these disappearances were brushed off by police, left unreported, uninvestigated or dismissed by authorities as "not due to foul play".

These disappearances are ignored BECAUSE these women are Indigenous. And if that's not enough to make you believe Canada has a racism problem, let's take a look at a partial list of individuals killed or harmed by police just in the last 3 months!!!

All of this to say: I recognize the racial inequity in our society. Now more than ever. I'm sorry it’s taken me so long to truly acknowledge and understand it.

“Contemporary” has become a scholarly catch-all for any music that is not classical. The word gets thrown around a lot in my industry as a graduate from a university-level “contemporary” music program and as a voice coach who does not teach in the classical style. I’m technically referred to as a CCM (Contemporary Commercial Music) singing teacher.

The influence of black culture on contemporary music cannot be overstated. The vagueness of the word is problematic in that it attempts to corral ALL modern genres into one ambiguous style. The web of contemporary genres spirals out to include jazz, blues, soul, R&B, rock, pop and everything from punk to EDM. Black culture has touched EVERY inch of “contemporary” music and this is not well represented in music programs or throughout the music industry.

In academia, in post-secondary education, the word ‘contemporary’ doubles as the word jazz. There are dozens of universities around the world that offer degrees. The representation of BIPOC students and teachers in these programs is depressingly low. Black representation is important in every institution, but ESPECIALLY in one dedicated to teaching a historically and culturally black art form.

During my education, I didn't feel the history courses aptly discuss the importance of the black experience in the creation and growth of jazz. In fact, I don't remember it being addressed at all. At the time, I think my privilege of being a white student allowed me to stay willfully ignorant about this disconnect between the history of our music studies and the practice of playing it.

In the vocal pedagogy community, in private one-on-one training, conservatory level programs and post-secondary universities, there is a bias towards ‘classical’ singing technique as a starting point for ‘good’ singing. Those who do not train in the classical style are sometimes thought of as ‘untrained’.

I think it’s time to accept that this bias – that classical vocal training is foundational – is based on a Eurocentric worldview and not actual pedagogical facts. It’s these types of beliefs that, over time, turn into micro-aggressions against POC singing in contemporary styles. Styles that were developed in black communities, a history we continue to neglect.

I have been exploring and meditating on my own internalized bias and racism. I have much to learn and much to unlearn.

I would be lying if I said I didn’t feel uncomfortable. I am uncomfortable. Facing my own unconscious bias has been a heavy task. I’m not perfect, at times I’ve even felt defensive. “I haven’t done anything wrong”, “I can’t be racist!”, “This is not my problem”.

This feeling of defensiveness is a wall built around my ego that has stopped me from feeling guilty, problematic or uncomfortable my whole life. The hammer that breaks down this wall is humility. To be truly introspective, to acknowledge my own privilege and face the fact that racism lives in me, I must settle into humility to be able to drive myself closer to the truths that live in me and in society.

My Privilege and My Internalized Racism

My privilege is being born white in Canada, to a loving family who supports my love of music. It is being free of stress or worries that I will ever be singled out or endangered because of my race. My privilege is knowing because of the way I look; I will never be considered a threat at first glance. I can smile at a person of authority and know that they will smile back at me, without suspicion or questioning. It is the confidence I feel in the fact that if I called the police, they would assume that I am in need of assistance, not that I am a danger to be dealt with.

My internalized racism lives in my willful ignorance of the black and indigenous experience in Canada. It is in my inaction to support a more equitable music industry in my community. It exists in my appropriation of black music without consideration of its history or its story. My bias was never at the forefront of my mind, but it was and is there.

I saw this most clearly when I lived overseas as a teenager. I knew, living in Egypt at the time, that I could get away with more than my friends of colour, and I took advantage of that. Whether it meant driving over the speed limit or cutting the lines at dance clubs, I experienced a kind of racialized life where I was on top for no other reason than that I was white.

As an adult, back in Canada, I still see a society unwilling to acknowledge the experiences of BIPOC, LGBTQA+ or other minority groups. With humility, I acknowledge that I was a cog in that machine for a very long time.

As a white musician, I have directly benefited from black culture my entire adult life without addressing or acknowledging systematic racism that permeates each and every day for POC. My favourite styles to sing have always been influenced by black music. Funk, soul, R&B. I've thrived in this genre and, looking back, I don't think I ever considered just how much of my joy and my passion was created by artists of colour.

I sing in a Motown and soul cover band. I learn the songs, get paid and have a blast. My love for the genre doesn't negate the appropriation I've committed and the lack of diversity within the band. I have yet to reconcile the years of benefiting from black music without pay proper dues, making appropriate acknowledgments or truly considering the struggle and power in some of the music I sing so lightheartedly.

As a vocal coach, I teach in many styles, but there is almost always an element of jazz, blues, soul or R&B in my method. Whether it’s in the form of vocal tract shaping to attain a more gospel tone or teaching the blues scale to a new student.

In the future, I aim to improve the quality of my lessons by educating my students on the history and background of the music we are studying and the skills we are mastering. They will know that the songs they are singing were influenced by, inspired by or created in black communities. They will know the vocal technique they are learning is based on something other than classical or western standards.

I owe EVERYTHING that I love about music to black artists. Everything. I will never take this fact for granted again.

I pledge myself to supporting people of colour, to lifting artists of colour, protesting next to my friends of colour, to donating to anti-racist causes and to creating a safe space in my studio for singers of colour.

I believe BIPOC deserve to feel safe and accepted and respected.

I believe LGBTQA+ folks - especially trans women of colour who are most at risk - deserve to feel safe, accepted and respected.

I support defunding the police and reallocation funds to anti-racism initiatives and community-based programming.

I acknowledge my own privilege, bias and internalized racism.

I will continue to reflect on my appropriation of black culture as an artist.

As a teacher, I will work to create a more equitable future for musicians of colour.

This is a time for action as much as it’s a time for reflection. I will continue to research, reach out, reflect, learn and unlearn.

Stay safe out there friends!

Lizzy Clarke is an artist and an educator from Toronto Canada.

Her passion for music, art and writing has led her down a creative path that spans from marketing copywriter to wedding singer to "Big in Japan" (Really! That actaully happened)