A Modern-Day Quest for Freedom

by Linda Rivenbark 6 months ago in humanity
Report Story 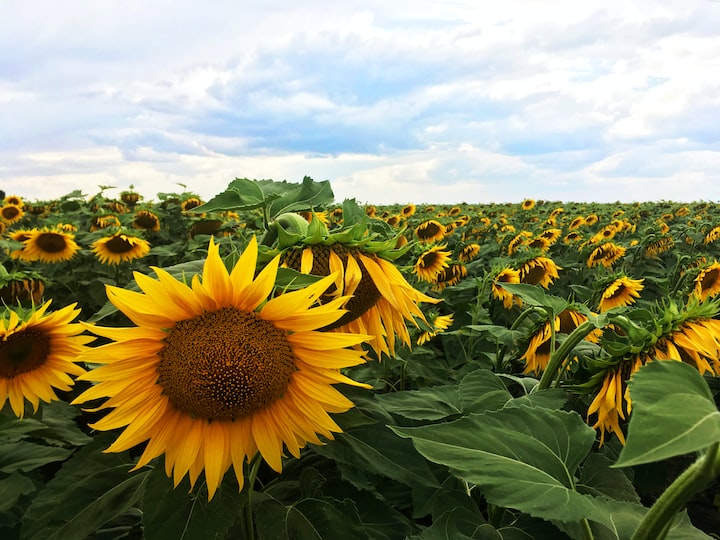 A field of radiant sunflowers (sunyashniki) nestled in verdant foliage is an apt representation of the country known as Ukraine. Representing the warmth and power of the sun, the national flower of Ukraine thrives in fields that face the eastern sunrise.

Sunflowers are native to the North American continent. In addition to pecans, blueberries, and squash, sunflowers (and their seeds) were found in abundance by early North American explorers who took some seeds back to the old country.

Ukraine's "Black Earth" regions were hot and dry with rich soil that provided fertile ground for the sunflowers to thrive. Sunflower oil came into common use in Ukraine when the Orthodox Church adopted it to use in foods cooked during Lent. Butter and lard were banned during the Lent season, but the new import (sunflower oil) had no such restrictions.

Nature has another beautiful representative of the nation of Ukraine - their national bird , the common nightingale. A well-known legend claims that the nightingale was once found only in India, but one nightingale visited Ukraine. Upon hearing the Ukrainian people singing sad songs, the bird shared its beautiful, lilting, uplifting song to cheer them up.

The legend contends that after the initial visit, nightingales visit Ukraine every spring to hear Ukrainian songs and share their songs with the people.

Listen to the nightingale's song in the video below.

Ukraine's love of beauty and quest for happiness might be due to the fact that the country is not a stranger to suffering throughout its history.

During the 5th and 6th centuries AD, Ukraine was settled by the Slavs. Then in the 9th century, Vikings sailed up rivers from Sweden into Eastern Europe. Some of the Vikings settled in Ukraine.

A Viking known as Oleg occupied the city of Kyiv in 882, making it the capital of a mighty state.

Under Vladimir I (aka Vladimir the Great or St. Vladimir) in around 988, Ukraine converted to Christianity.

Unfortunately, the mighty state became fragmented in the 11th and 12th centuries. In 1240, Batu (grandson of Ginghus Kahn) lead the Monguls in a military campaign in which they conquered Southern and Eastern Ukraine.

The Northern and Western sections of Ukraine maintained their independence (freedom) until they were conquered by the Lithuanians and Poles in the 14th century.

Some Serfs known as Kozaky or Cossacks (literally meaning freemen) escaped from their Polish landlords in the 15th and 16th centuries. As Polish serfs, their status had been halfway between slaves and freemen. They inhabited the steppes of Ukraine, creating a self-governing society known as the Cossack Hetmanate under the authority of a hetman (general).

During the latter part of the 17 century, Western Ukraine was dominated by Poland, while Russia controlled Eastern Ukraine. Russian Empress Catherine the Great abolished the Cossack Hetmanate in 1764 in a drive to absorb Eastern Ukraine into Russia.

As Poland's power declined during the 18th century, Russia and Austria determined to take over Ukraine during the years 1772 to 1795. Russia took over most of Western Ukraine, with a small strip of land in far west Ukraine going to Austria.

The 19th century found Ukraine under the staunch control of Russia. During the middle of the 19th century, nationalism progressed in Ukraine and in 1918, while Russia was involved in a civil war, Ukraine enjoyed a brief interval of independence.

In 1921, under Russian coercion, Ukraine became a part of the Soviet Union. Stalin forced the collectivizing of the farm land in the Ukraine. The land and livestock became the property of the state. Ukrainian peasants did not bow down to the will of Russian overlords, and many of them chose to slaughter their livestock to prevent them being taken by the state.

Between 1932 and 1933, Stalin exacted high quotas of crops that would be confiscated by the State before they could keep any for the needs of their families. The quotas were set so high that multiplied millions of people starved to death as a result of this man-made famine. Known as Holodomor, the estimated death rate due to starvation was 7 million.

Further suffering took place in the late 1930s with many Ukrainians being put in prison camps or executed. Millions of Ukrainians died when the Germans invaded their land in 1941. In 1n43, the tide of the war turned and the Red Army took back Kyiv from the Germans on November 6, 1943.

In 1986, the the power plant at Chernobyl suffered a devastating disaster and authorities attempted to cover it up. As the 1980s progressed, Ukrainians became more unhappy with Moscow rule.

The Ukrainian People's Movement for Restructuring (RUKH) was founded in 1989, and in 1990, demonstrations took place.

When the Soviet Union collapsed in 1991, along with the collapse of Communism, Ukraine again became an independent nation. For years economic decline along with high inflation caused more pain for the people of Ukraine. With time and dedicated efforts, economic stability and growth returned.

The Ukrainian Parliament passed a declaration of sovereignty in July 1990. In August 1991, Ukraine was declared independent from the Soviet Union. Their first president, Leonid Kravchuk, was elected in December 1991.

Ukraine has had more opportunities to demonstrate to the world its resilience, determination, and strength.

The return to democracy from socialism and communism has proved to be a challenge, but one in which they have persevered.

The Orange Revolution of 2004 and 2005 centered around the 2004 election which was believed to have been rigged. The initial winner was Viktor Yanukovych, but following protests and an election rerun, Viktor Yushchenko became President.

Economic decline in 2008 to 2009 caused more suffering, but with effort over time, Ukraine again recovered.

Demonstrations rocked Ukraine in 2013 to 2014 when President Yanukovych chose to reject an association treaty with the European Union. Consequently, the Ukrainian parliament in 2014 voted to remove him as President.

Petro Poroshenko was chosen to be Ukraine's new president in February 2014. In the same year, Russia demonstrated its intent for conquest when it illegally annexed Crimea.

Volodomyr Zelensky became President of Ukraine in 2019 after a landslide election victory over Petro Poroshenko. President Zelensky has rallied Ukrainians around him in defense of their country with his example of courage and determination in dangerous times.

Russia is now engaged in a bitter war to defeat and occupy Ukraine. On February 24, 2022, Ukraine's 44 million citizens came under attack by Russian President Vladimir Putin, carried out by bombs, tanks, and ground troops. Ukrainians are bravely giving it all they have to fight back and resist.

Fighting for their freedom is nothing new to Ukrainians, nor is suffering and hardship. Instead of the quick, largely uncontested conquest that was apparently expected by the aggressor, the citizens of Ukraine have stood their ground, fought the good fight, and continue to this day.

All Americans and all citizens of the world who know what it is to fight for their freedom must stand with Ukraine and do everything possible to help them win, stabilize, and enjoy national freedom again.

Ukraine, we are with you all the way!

More stories from Linda Rivenbark and writers in The Swamp and other communities.