The Curious Case Of The Man Who Disappeared

by Annabella 3 months ago in bitcoin

Bitcoin and it's strange origin. 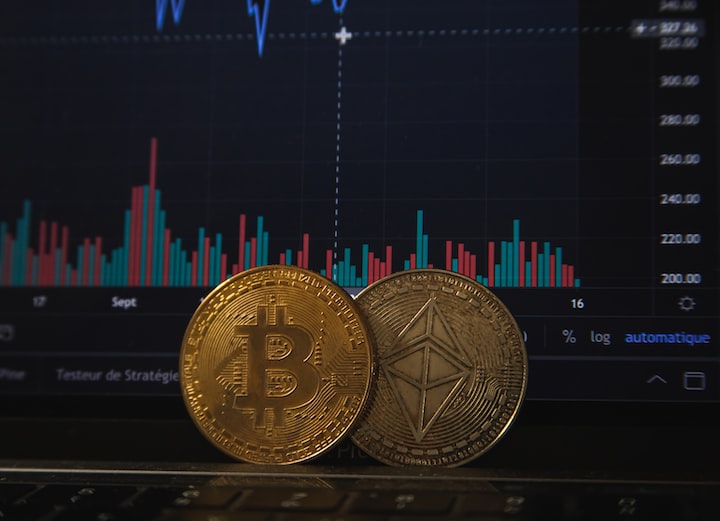 Four years ago if you had asked me: 'Anna, shut that computer down and tell me what Bitcoin is', I would have blinked at you stupidly. Now? I know Bitcoin is worth more than gold. Back then I hadn't dipped my toe into the world of investments and couldn't care less if the market rose or fell. I worked at a small market as a cashier and was paid minimum wage. I was only half-awake on my shifts and when I got home it was all I could do not to fall on my bed and sleep like there was no tomorrow. I thought Bitcoin was only for rich or some country's currency.

I don't remember exactly what caught my attention. I was scrolling through BTS dance routines and memes. Maybe it was the hot guy in the suit with the charming smile on a thumbnail but a Youtube video caught my attention. ''Bitcoin And How It Changed The World.'' On a whim, I also subscribed to their channel. My life would never be the same.

This is one year charting of Bitcoin. Have you ever seen something more beautiful? It is the wet dream of every investor. In the ''bear'' and ''bull'' market, Bitcoin took the prize. These are the moments I wish I could time-travel. I would be so rich now.

As a story teller and daughter of a writer (mum is not published but hey, she insists she's this close to being world famous), I've wondered about the mysterious man who walks out of an old street and looks behind his shoulder in case they are watching -the government I mean with their creepy underlings in suits. (I apologize to the FBI agent reading this if I have hurt your feelings with this sentence).

Why would the creator of Bitcoin choose to remain anonymous? Let's follow him as he gets out into the street with the smell of something strange still lingering on him.

He's wearing a grey coat while a brown hat hides half of his face. He looks covertly down the street and starts walking. He clutches his laptop discretely to his chest. Right next to the laptop is the USB he always keeps in his pocket. You won't take a notice of him even if he brushes past you. Are you imagining it with me?

I hope you are thinking what I am thinking or I'll have to throw this at you:

Nakamota was no fool. He anticipated it all: The eventual downfall of the banks in the coming years, the early recession of 2008 which saw wall street brokers jumping out of their windows as they saw hoe the numbers swallowed their investments. Then it was our turn: Yes, the same people who serves your coffee, or work in the grocery store and slave away in Amazon factories.

Their systems are full of coffee. With our eyes half-closed and half open as they trudge along in line to punch in the clock that would validate their existence in the eyes of large corporations. Most of the workers only receive minimum wage. I was part of that group, waiting in line, tired and barely scraping by. Now, my mind is turning as I think of the theories behind Bitcoin.

Theory 1: Sitoshi isn't a man. Nakamoto is the pseudonym of a group

Let's look at the people who are good candidates but weren't proved to be the founders of bitcoin: Vili Lehdonvirta, a professor from Finland, Hal Finley a computer specialist who lived close to Dorian Nakamoto, a man of Chinese descent. Craig Wright, an Australian and lastly Elon Musk (CEO of tesla). Apart from them, a dozen more people have been speculated to be the creators of bitcoin. The only answer is that it's not a single person. Each man or woman carry one puzzle of the origin of Bitcoin. How could so many people have been accused of being Sitoshi yet no single man was pinned? How can a solitary man keep a secret this big all by himself, as he escapes the grasp of different security agencies all over the world? Where does he gets the resources to remain off-radar for so long?

Think about the name. It sounds more like a code-word to me.

Satoshi isn't the hero of the story. The genius behind the idea should have come forward by now, lured by the fame of becoming a wealthy person unless he had reasons to hide his nefarious dealings. I speculate that this cryptocurrency was created to enable Satoshi to handle illegal transactions across borders.

The proof is in the cryptocurrency itself. Not only is it untraceable, but also a universal currency. The transactions never exchange hands and reportedly this cryptocurrency has been used in the Black market. Drug dealers have over the world have been linked to Bitcoin. Law enforcements all over the world are afraid Bitcoin is being used for money laundering.

Bitcoin was also the only currency accepted on the silk road where illegal goods are sold. The people selling the merchandise are off radar. Tax evasion is another danger. IRS won't accept Bitcoin as payment. Craig Wright is a man accused of tax evasion. Two online medias Gizmodo and Wired called Wright ''the most likely Bitcoin creator!'' There was also a search conducted by the police on his home, but due to lack of evidence no charges were pressed. However, the fact that the origin of crypto was linked to Craig rings warning bills for many people.

Theory 3: The Creator of Bitcoin is Dead

The creation of a universal currency puts the banks that thrive on interests in danger. There are no dividend or interest paid on this cryptocurrency. Do you remember Bitcoin is untraceable? Well, banks can't reverse the transactions either.

There has been no real communication from the supposed founder. It could be that the founder has already been removed. The idea for Bitcoin came forward in 2007, a little after the recession of 2008 that shook the markets of USA. This was mainly because of irresponsible lending of money to people. Laws were created to make sure this doesn't happen again. For a while it placated the people but must have made the idea of a digital currency more appealing to the people. I can't imagine a world where banks would have been okay with losing that kind of power. The lack of communication of Sitsohi with the public and strong motive of the banks in wanting him dead doesn't bode well. Even if Sitoshi communicates again how sure are we that its really him and not a puppet that has been placed there by those in power?

Theory 4: The Creation Of Bitcoin Is A Hoax Created by Intelligence Agencies.

In the end Bitcoin is an imaginary currency. Bitcoin was supposedly created as a way to lessen the power of banks but we have to wonder is it a ''trap door'' project by agencies to see how people would react to a digital currency? This won't be the first time that a project like this would be thrown at at the public as the agencies sit back and observe the reaction of the masses. Its a way for them to control, if not entirely stop illegal transactions done over the internet

Bitcoin has vast possibilities and even more theories behind its creation. In the end only time will tell what the real story behind Sitoshi Nakamoto is.

Trying to bring a change in my own little way

See all posts by Annabella →