On the Banks of the Mekong

by Nalina Devi 8 months ago in bitcoin

A story about sharing the gifts of a river 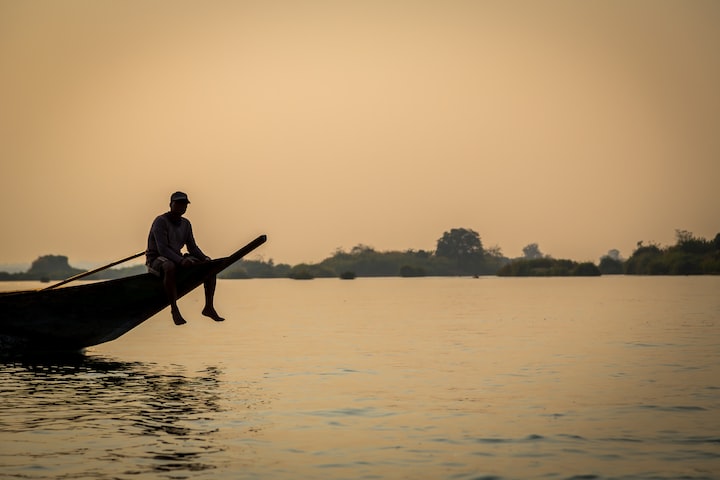 Photo by Robert Metz on Unsplash

On the banks of the Mekong River, lived a boy named Tashi. Tashi came from a long line of fishermen. The trade was passed down from father to son for many generations. Every morning before the sun came up, Tashi and his father went out on the river. As his father threw in the first bait of the day, he always said, “You only receive from the level that you give. We give food to many fish, and, in return, many fish give us food. It is the balance of life.“

Tashi wasn’t so interested in the fishing. Instead, he was fascinated by the flowing energy of the mighty river. While on the boat, his mind would wander, and he would see changing images and shapes weaving in and out of the Mekongs currents. After the fishing was done, Tashi focused on his school studies. Then, he would sit by the river and draw in the sand the images his imagination had seen in the Mekong earlier that day. Swirls became crab shells and dragons, pulsing waves became giant mountain ranges, and bubbles transformed into planets and stars.

Tashi’s mother was fond of his art and always supported his creativity with joy. When the sun set, she would join Tashi on the river bank and admire his work, but also gently remind him of the law of impermanence. She would say, “No matter how beautiful your creations may be, the river waters will always rise with the moon and wash away all that you made, it is the way of impermanence.” And if this reminder made Tashi sad, she would say, “Don’t create art to hold on to things, create art to be like the mighty river. Your inspiration comes from the swirls and flow of the water, something that is ever-changing. For new shapes and beauty to be formed, the old must flow out. It is a law of nature.”

One morning when fishing with his father, Tashi asked, “Where does the mighty river come from? And where does it go?”

“The river is a blessing from the mountain, and it offers itself to the sea. The river is the vehicle for the mountain’s gift. It gives energy indiscriminately to us and to all other beings along the way,” his father said. “In a way we are each a powerful mountain. Our thoughts and dreams are our gifts, capable of bringing happiness, abundance, and life to the sea of all beings.”

The rest of the day on the boat, Tashi wondered what he might offer the world if he really were as powerful as a great Himalayan mountain. He would create beautiful images to inspire the world, he thought. If only he had a way to share his creations with more people. He contemplated how his art always slipped away each night with the tide.

Later that season, it was Tashi’s 11th birthday. Because his parents were simple fisher folk, their means were quite small. Yet, his birthday was still celebrated by his mother cooking his favorite meal for dinner, fish momos. Rowing in from the day’s fishing, Tashi could smell the steaming dumplings coming from the house.

To his surprise, this birthday, his mother had not only made his favorite meal, but his parents had also saved money all year to give him his very own sketchbook and pencils so he could save his drawings. His mother told him with her warming smile, “Impermanence is inevitable, but sometimes it is okay to hold on to things a little while longer.”

This new little black sketchbook became Tashi’s prized possession, and he filled its pages with the most beautiful drawings anyone in the village had ever seen. And on some evenings, the villagers gathered to hear the stories Tashi told about the magical lands he created. Sharing these stories gave him great joy. He dreamed about being able to fill his days with creating. He thought to himself: If I am a powerful mountain, I wish to give the world art, not fish.

A few years later, when Tashi was grown, it had become time for him to be a fisherman of his own boat. On this coming-of-age birthday, Tashi’s father sat down with him and said yet again, “You only receive from the level that you give.”

“I know father, we give to the fish, and in return, the fish give to us.” Tashi said.

“No, son, you’ve given us beautiful art and stories over the years, and in return, your life should be filled with beautiful art and stories. Your mother and I have saved enough money for you to travel to the city, where you can pursue the life of an artist. Do not forget you are as powerful as a Himalayan mountain, and your blessings can be shared as expansively as the mighty Mekong River.”

Saying goodbye to his parents and the village, Tashi left with his black book filled with art. He promised to return home one day with many more creations and stories from his journey, and with riches to repay the kindness and generosity his parents had always shown him.

Tashi arrived to his destination, the city of Hong Kong. The city was vibrant, buzzing, and busy. It was unlike anything he had ever experienced in his quiet home by the river. He found himself a small apartment, and enrolled in the Hong Kong Art School. Tashi loved university life. He made new friends, learned more art techniques, and discovered graphic design and how to use the medium of computers to make art. He never stopped creating, and his art skills got better and better.

As the months went by, Tashi filled countless notebooks with drawings and stories. He continued to use the same type of little black notebooks given to him on his 11th birthday. These notebooks reminded him of his mother, and her kindness and support on his journey to becoming a professional artist. He missed home often, but never forgot his father’s wise words “to be as powerful as a mountain, and let his gifts flow to many people like a mighty river.”

One evening, after a long day of studies, Tashi went to the local tea house to have his favorite drink; a chai tea that was native to the Himalayas. As he sketched in his black notebook and sipped his tea, a well-dressed older man sat down next to him. The stranger said, “You seem like a man of good taste.” Tashi noticed that they both ordered the same drink and had the same black notebook.

“This tea reminds me of home,” Tashi said with a smile.

“Where are you from?” said the man.

“A small fishing town on the Mekong River, near the Himalayas.”

“Ah, yes, growing up in nature cultivates great inspiration in the mind.”

The two talked for quite some time over tea and Tashi learned that the old man was from Japan and had also grown up by mountains. The two men shared stories of their families and discussed Tashi’s dreams of being an artist and bringing wealth to his family.

When their tea was finished, the stranger said, “I have deeply enjoyed your company young man. A pure soul like yours is hard to come by. I must go now. Good luck on your journey. I feel great things may come your way. And remember, you are as powerful as a mountain, and your blessings can be shared as expansively as a mighty river.” And the man grabbed his black notebook and left.

Those words echoed through Tashi’s mind, remarkably similar to the same wise words his father had spoken. There was something mysterious about his new friend, and Tashi was struck by a feeling that their brief meeting was one of fate. He realised that he had not learned the stranger’s name nor what he did for a living, though it was obvious that he was very successful. But more notable, was how kind and humble this man was.

Grateful for the encounter and encouragement, Tashi opened his notebook to finish his sketch. To his surprise, the notebook was empty. The old man had grabbed Tashi’s notebook by mistake, and by this time he was nowhere to be found!

At first Tashi was sad because his most recent sketches were gone. But then he remembered the wisdom his mother had shared about impermanence, “It is a law of nature... the old must flow out for the new to flow in.” Comforted by these words, he smiled, let go, and remembered how when he was a boy, his art had always been lost to the river.

Tashi flipped to the front of the notebook looking for the man’s contact information. Tashi knew that this type of notebook included an inscription on the front page that said:

Tashi flipped through the pages again. They were all blank. He knew that on the inside of the back cover, these notebooks also had a small envelope pocket. He looked inside in a last attempt to find the some identification about the mysterious man. What he found in the envelope was a note that said:

My time here is fleeting, but yours is just beginning. Here is a gift to you, my friend. May you use it wisely and spread your talents and abundance to the great sea of all beings.

Tashi was in shock. This man had intentionally switched the books so he could leave him a gift. He flipped to the front of the book and read again .04 Bitcoin. Tashi then remembered he had learned about this new growing form of digital currency at the university. He did the math an discovered that this generous gift was worth $20,000.

In the time it took him to drink a cup of tea, Tashi had gone from a struggling artist, to having more money on hand than he had ever had in his life.

Tashi decided to visit his home with this small fortune. Overflowing like a mountain river, he shared this wealth with his parents, paying off all their debts. He helped the other villagers as well, and bought art supplies for all the children.

After completing art school, and acquiring many successfully art deals, Tashi moved back to his home by the Mekong. Grateful for the generosity of the wise old man who had changed his luck, Tashi decided he also wanted to spend his life sharing his riches with others. He opened an art classroom for the village children; and just like a mighty river, shared his abundance, happiness, and love of art with them. He hoped that this small current of abundance, and the encouragement to follow their dreams, would flow through them as well and ripple out to the ocean of all beings.

A painter and writer, sharing her love of nature and its wisdom.