by LC Douglass 6 months ago in bitcoin

How Do You Build an Economy When You have No Identity?

The Jeffrey Epstein case is a sign of larger change. Some want to get to the bottom of his death or disappearance and to expose the intelligence web of drugs, experiments, human trafficking, charities, blackmail, celebrities, guns, cults, and raped children. But these spy networks cannot be fully exposed and destroyed so much as defeated, because they are obsolete. Their Reich seems powerful and impregnable, as though it has been there for millennia and will be for millennia more.

The same goes for the people who put a human face to these clandestine projects. They may worry about exposure of their secret profits and Eyes Wide Shut parties. Really, though, they should be worrying about their growing irrelevance. Their sympathizers at Twitter, Patreon, Facebook and Google can censor critics all they want. The world is still moving on without them. With every passing day, they become people who just don't matter. They depend on evaporating illusions and failing institutions which they themselves destroyed. They do not understand that being a billionaire in the old system does not mean control or leadership in the new order. If anything, it means that they have staked all in the old system in decline and they will not recover.

Why are they irrelevant? It isn't because their corruption is catching up with them. It is because the dominant mode of social psychology is shifting. The old system deified the Self as a rationalist, modernist construction, culminating in an egomania which was projected onto the Baby Boomers. The Boomers congratulated themselves as innovators when they augmented narcissism to embrace the Id or the Jungian shadow self (as with tales of assassins, like The Bourne Identity, above), or when they examined Other Selves or even Superegos. But they never really left the Hall of Mirrors. 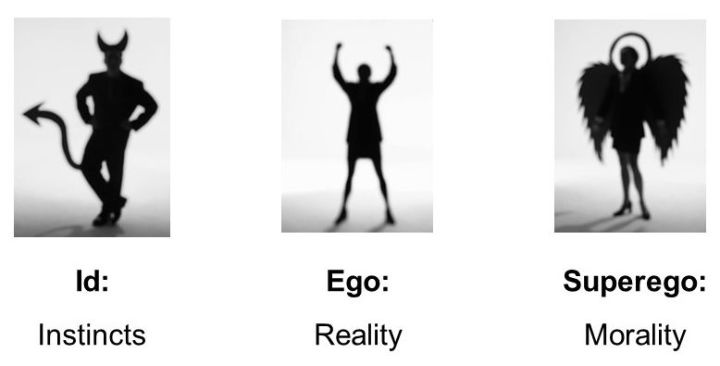 The Freudian architecture of the Self. Image Source: Simply Psychology.

Younger generations rejected this creed and welcomed anonymity with relief. The Boomers were confounded. Why would their successors not promote the Ego, and refuse to worship at its altar of personal survival? Why did these children not construct the Self through ticked boxes on materialist shopping lists? Was their apathy not a sign of failure? Of course, some post-Boomers tried to follow the creed of the Self, but eventually they had they had to reject it because it is a cultural dead end.

In another blog post, Farewell and Hello, Commodore, I described how the tech sector embedded egomania in its early tools with the rise of Apple. If only its competitor, Commodore, had survived to set the tone. It took time to understand that anti-egomaniacal—and anti-Self—stances would be necessary to function effectively in technological environments. Unfortunately, there is no model for this. Conventional psychology views the anti-Self as self-sabotaging, toxic, and suicidal. A positive alternative to the Self is currently inconceivable in the mainstream. We are only starting to consider how to build an effective psychological template beyond the Self on the Internet. Our understanding of this is also ill-served by the language of politics. But there is some progress with the idea of the egregore, or collective thought form, as it relates to Internet memes.

That is why the tech sector is now at a crossroads. There is the Me-Me-Me thrust of social media. Transhumanists are introducing invasive fetish-gadgets to create a false awakening of the Self: iPhone, iPad, iPod, iOS. Ultimately, they want to become Übermenschen—superpeople. They will build cybernetic body augmentations and an illusory Superego to preside over a fake, virtual reality soul. The Singularity will feed on Big Data to extend the Ego-construct into the realm of the simulated Self. This plan amounts to enslavement, masquerading as enlightenment.

At the same time, there are other technophiles who seek freedom by building tools which are anti-egoic, and depend on anonymity. Anonymity erases the need to bow down to narcissists, or to become one yourself. 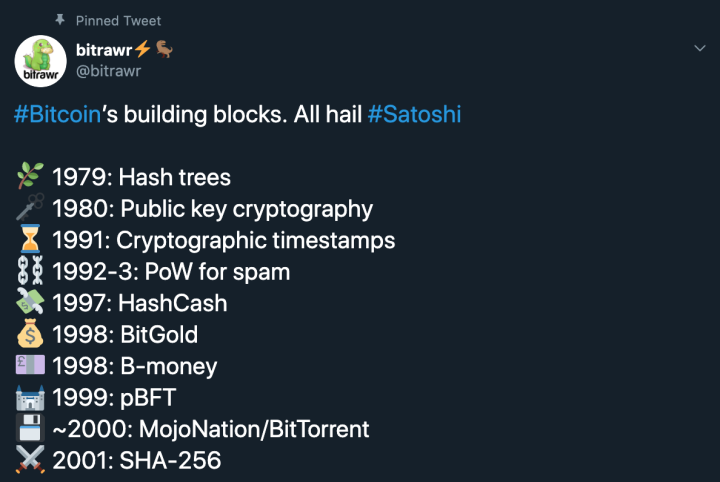 Bitcoin was one tool founded on several innovations which enabled anonymity and eliminated the need for middlemen and authoritative institutions in daily life. The invention of Bitcoin and cryptocurrencies marks a revolutionary transformation of money to create a decentralized economy. True to this idea, the inventor of Bitcoin, Satoshi Nakamoto (backgrounders here and here), remained anonymous, withdrew from the crypto space, and left his 980,000 Bitcoins undisturbed.

Even when Bitcoin became the currency of crime on the Silk Road and the Dark Web, Satoshi's anonymity was one of the guarantees that Bitcoin had been left in the wild to develop on its own. There was hope in that. Rather like Dogecoin's dog, Satoshi Nakamoto became the egregore of Bitcoin. Despite rumours that Bitcoin was a CIA invention, cryptocurrencies could potentially eliminate the whole architecture of conventional economic and political power. That means that at the end of the day, cryptos could destroy an assassins' guild like the CIA.

How odd, then, that Business Insider reported on August 16, 2019 that the mysterious inventor of Bitcoin will celebrate the 11th anniversary of bitcoin.org (established August 18, 2008) at 4 PM EDT Sunday. 'He' will 'reveal' his identity at this Website and on the site of the New York PR firm, Ivy McLemore and Associates (?). This comes three days after Satoshi Nakamoto supposedly retained Ivy McLemore. There will be three parts to the reveal on August 18, 19, and 20, 2019. There is something Epstein-esque both in the chosen dates and in the Global Newswire statement:

"Indicative of the compelling evidence he presents in each part of the series, Nakamoto will illustrate the role that cyphers and encryption related to his devotion to Chaldean numerology played in many decisions in his creation of Bitcoin."

After that dead giveaway, it's plain that this is not a PR stunt by Satoshi himself, but rather by Satoshi Nakamoto Renaissance (SNR) Holdings (here they are on Twitter, while their PR guy, Ivy McLemore, is here). McLemore's mandate:

"The focus of our digital marketing and public relations efforts for our newest client [SNR] will be the creation and distribution of insightful, thought-provoking content that attracts and engages investors, provides overall value, and builds public trust."

This is also known as: not providing overall value, and not building public trust. This maneuver provokes thought only insofar as it made me ask who these people are. It is typical of an egomaniacal mindset to try to capture the pristine mathematics of Bitcoin with Babylonian performance art, thereby generating 'new value' around it.

The more you look at the scant information about Satoshi Nakamoto Renaissance Holdings ("in the business of providing superior Blockchain technologies to help transform people's lives. For more information, please visit www.SatoshiNRH.com or follow @SatoshiNRH on Twitter [joined August 2019, zero tweets]"), the more you have to wonder whether SNR is just Ivy McLemore and his small team. On LinkedIn, McLemore states that he specializes in Buyer Persona Research and SEO and e-mail marketing. The Satoshi reveal page asks you to input your e-mail address. McLemore attended the University of Houston for a Bachelor's in journalism and worked previously at Invesco and Guggenheim Partners.

On the same day that he publicized his new affiliation with Satoshi Nakamoto Renaissance Holdings, McLemore was singing the praises of Morningstar's risk assessment of mutual funds at Iris. The Iris article was related to a newsletter advisory on investment trusteeship among McLemore's associates. The newsletter further highlights the associates' response to Morningstar's recategorization of bonds, while keeping an eye on rules and regulations. This came up just as bonds flashed a recession warning this week and stocks began to heave up and down. Of course, 'Morningstar' (the name supposedly refers to Thoreau's Walden) screams Luciferianism, the creed of egotists.

It is curious that this comes out just as the MSM are predicting a financial collapse next year. Bitcoin is one of the financial boltholes in such an event, because it should retain its integrity beyond the smoke-and-mirrors economy of the divided Self. Bitcoin cannot be given more or less meaning by having symbols projected onto it and identities attached to it. It exists beyond self-promotion and self-deception. One test of that assumption will be McLemore's SNR campaign. The degree to which he can manipulate the cryptocoin's value with his 'Satoshi reveal' marketing scheme will demonstrate the degree to which Bitcoin is susceptible to the marketing ploys of the old system. If its value remains unaffected, it can be considered to be independent of such ploys, and to be operating in the new, as yet undefined, economic and social space of the egregore.

We are Satoshi Nakamoto

Award-winning writer & blogger. I analyze the impact of technology on 21st century history.

See all posts by LC Douglass →