by Jakub 8 months ago in bitcoin 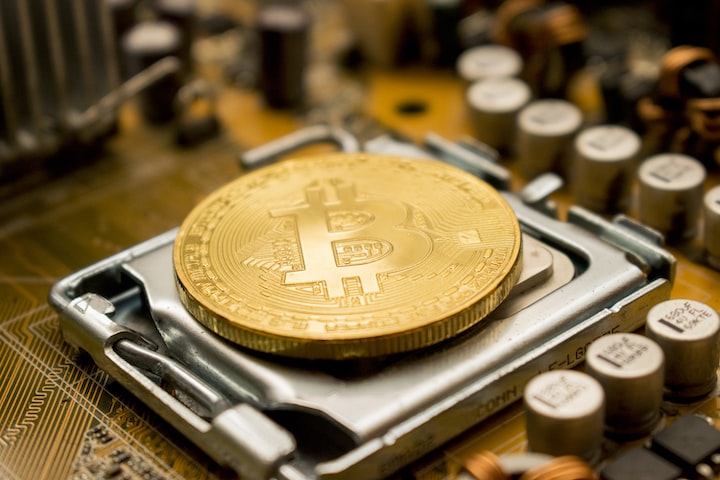 “Have you ever wondered what lies beyond that 1 and 0?”

Satoshi Nakamoto glares at you through his copper-tinted glasses in anticipation of an answer. His cheeks are hollow and silver streaks sift through his hair. Tea drops stain his corduroy pants and a broken clockface reflects his psyche. You knew Mr Nakamoto to be esoteric, but even this question felt a little out of left field.

Before you can compile the right words to respond Mr Nakamoto’s giddiness bursts from him like a balloon hissing air. He seems famished from excitement as he turns his attention to his computer screen. You follow the lightning bolts that trail the mature man’s bloodshot eyes as data refracts between his lenses. Your back aches as the chair begins to align itself with your spine. “Why has Mr Nakamoto even called you here after this morning’s lesson?” you ask yourself.

With one hand curled around the border, Mr Nakamoto’s index finger digs into the screen. Through jittered eyes, you view an array of code. You cannot parse this information as quickly as he can, but with a sharp breath, you knew Mr Nakamoto was having his eureka moment. The aging academic’s neck swivels in tandem with the monitor. “Look at the code again”, he murmurs. You drag your clammy hand across your face, stretching your skin and springing your chin back into position. This room is a void, and this monitor a black hole.

You leer in again at the alphanumeric sequence before you but still cannot decipher this data. You understand C++ but what the hell is there supposed to be in between the lines written? Mr Nakamoto locks eyes with you. His gaze is intimidating yet calming like a thunderstorm on the ocean’s horizon. “That right there is a blip,” he says whilst pointing to the symbol ‘₿’.

As a siren calls to her seamen, you too have fallen victim to the lure of Satoshi Nakamoto. With every word he says, waves of information drown your senses. Mr Nakamoto begins, “think of code as an atom. One layer of the code is visible to us on this screen. But what if there was another layer buried within? A tiny seed compacted over and over again and pollinated across the digital aether. If the fundamental code is the nucleus, what, or where, are the electrons?”

You lift your eyes to see little candlelight pixies dancing across the ceiling. “Code between code?” you recount internally. Cryptograms start appearing on the blackboard walls that encase you. You feel trapped yet intrigued like a moth to a flame. Mr Nakamoto unplugs the computer with one swift motion.

Your eyes lock again but this time you see the gravitas in every wrinkle of his face. “An ecosystem of unknown wealth”, he exclaims after grabbing the nape of your neck. Your teacher scans the room before proceeding further. “Do you really believe that Bill Gates or Warren Buffet are the richest people that roam our planet?” he asks rhetorically. “They pale in comparison to the royal underbelly that underpins the real world. Embedded far deeper than you can imagine lives a true valley of kings and queens, not governed by monetary rules or governmental regulations, unconstrained by the norms of modern society! That is what this blip shows. Like an emerald weed sprouting through a concrete jungle, can you not see that we have been gifted a golden opportunity to break free from our 8-bit box!”

Mr Nakamoto pants as the surge of emotions escape his body. You absorb this information surprisingly quickly and respond, “if these shadows are so rich, why do we never read about them on the news?” Mr Nakamoto is filled with glee. This is the reason he brought you here. As if right on schedule he answers, “because this ‘₿’ signifies a secret transaction, a transaction that surpasses anything found in our world.”

The Windows 7 start-up sound chimes through the room. Mr Nakamoto redirects your attention back to the screen, zooming in on the unique ‘₿’ token and its succeeding numbers. It does look like a currency symbol and maybe some sort of obscure transaction, but you remain sceptical. Even if this was a type of currency who is to say it has any real value. Mr Nakamoto remains silent as he studies your face, yet you can sense the hubris in him like a cat catching an injured bird.

The professor suddenly rests his hand on your shoulder. His hand feels light compared to the weight of his words. “All you need to know is that money makes the world go round, but our world is stuck – stuck on a hamster wheel fuelled by corporate conglomerates and ruled by sinister forces. A virtual Hadrian’s Wall guards the wealthy and casts a shadow over the rest. Take this ticket and bridge the gap.” You catch Mr Nakamoto’s smirk as he takes a swig of his green tea between his monologues. No matter how dire the words spoken or how farfetched his beliefs are, his eyes shimmer with hope in the fluorescent light.

This was his final lesson.

He did not need to say it back then. Frankly, feeding you with a silver spoon would have defeated the purpose of your conversation. All he did was remove your rose-tinted glasses to reveal that he had chosen you. Irrespective of the existence of some underground society of wealth or a glitch in the matrix, you now held the torch. You are Satoshi Nakamoto’s legacy. Only you can pull back the veil to look beyond the bit.

Receive stories by Jakub in your feed
Jakub
Read next: What is Cryptocurrency Mining?