by Erika Farrah 7 months ago in entertainment

How a costume can tell a story, starting with Katherine of Aragon

Over the years, I have watched the Showtime series The Tudors many, many times. I have learned one thing while watching the series for many times, and that is that the fans of this show and of history have paid very close attention to the costuming. Some love it, some hate it, and some are neutral. What many people do not realize about a show, a movie, or play, is that just like the script and scenery, the costumes designed are just as important in telling a story. This is the start of a series of posts about how I interpret the costumes story telling of each of Henry VIII's wives from the show The Tudors.

We start with Katherine of Aragon.

A personal favorite gown of mine from hers is this lovely black one. 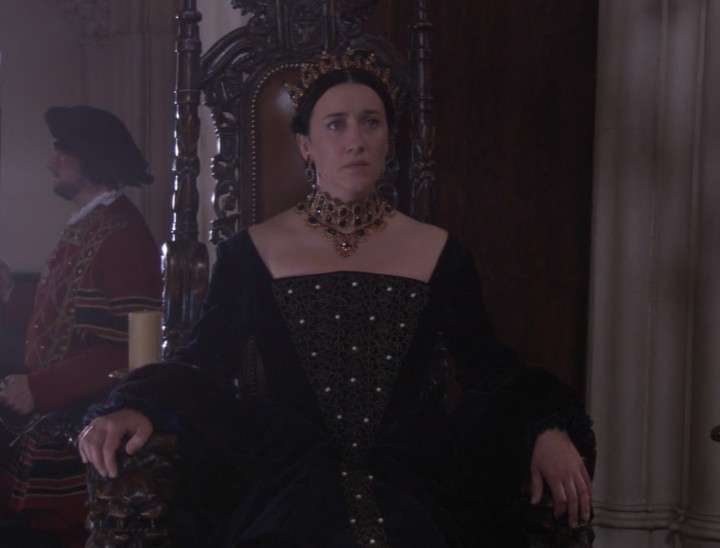 The two most notable times Katherine is wearing this dress is in the opening credits of season 1 and when she is in court with Henry as he fights for his annulment from her. This dress is every bit Katherine of Aragon. It shows she is of noble blood with the pearls in the center of the bodice and down the center of the skirt, as pearls were a sign of the higher class in the Renaissance. She is dressed modestly yet her feminine form is nicely highlighted, and above all she is wearing the jewels of the queens of England. It is in this one costume alone that Katherine shows her power and her right as the true Queen of England.

The next dress I wish to talk about for Katherine is this one right here. 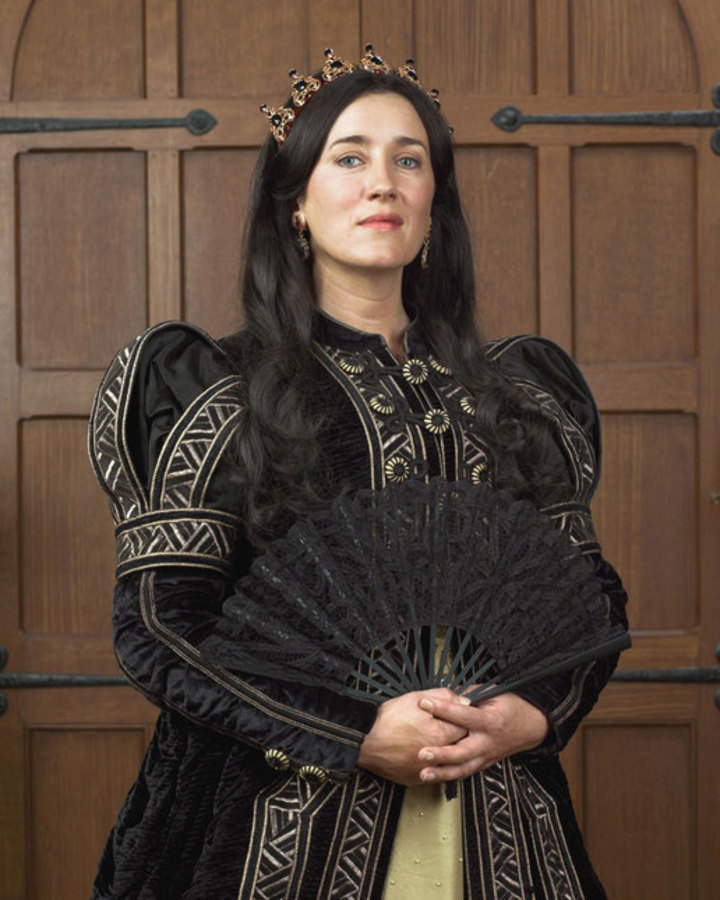 This dress was first for the promotional shoots to help advertise The Tudors. This dress received a lot of mixed reviews. For me, I look at it and it seems very matronly. Yes, at this point in her life, Katherine of Aragon would have been in her early to mid-twenties at the oldest. Even a conservative woman like Katherine would not have felt the need to dress like a nun. Being the wife of the a king means being more than just a symbol of true piety, but showing the people you are still young enough to bear more children. This dress, though lovely in the color combinations, to me says "grandmother." It would have been a turn off to Henry and would have said "I do not wish for more children" by Katherine, who should have been doing more than just being an advocate for her own daughter.

Outside of the story I think this dress tells, it is also ill-fitted. It makes Katherine look larger than she is, and as I have already stated before, older than she should have been. Yes in the 1500s she would have been considered middle age, but she was not yet past her child-bearing years. It is an unattractive dress, and for the purpose of showing Henry's wandering eye, it shows that she no longer caught his.

This lavender colored dress is one of Katherine's best. 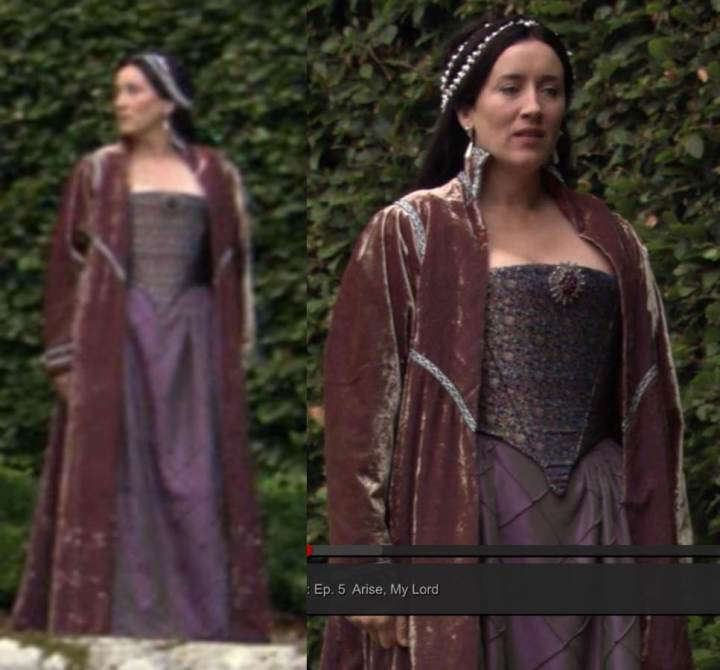 The dress itself is a story of a royal. Even if she were not queen, as a princess, Katherine would have had an elaborate skirt with a beautifully patterned bodice. I love the way the fabric moves, showing a shining brightness and a deeper dullness when she walks. It shows how even the life of a queen, though wonderful and enchanting, can also have its moments of great burden.

My biggest problem with the dress is the jacket. It is a lovely color. I love the velvet and the light embellishments of silver, but it looks more like a dressing gown worn in the privacy of her apartments, not something she would wear out in the gardens where anyone could see her. Katherine had a reputation and an image to maintain and this dress does not do justice for either.

I now want to talk about this lovely yellow dress and the coats with each one. 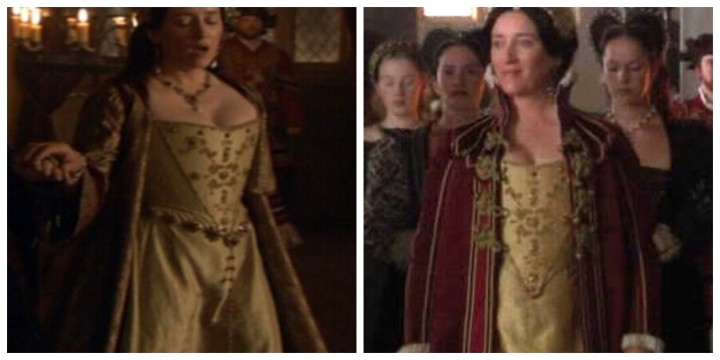 This yellow gown is worn several times throughout the series and I find it a little odd. In this time period, yellow was the color of mourning in Spain. While the dress is more of a golden color than a yellow, it to me is a foreshadowing of Katherine having to come to terms with the fact that she will be mourning the loss of her husband's Catholic nature. She tries so hard to hold on to him and her power and claims she will always be his rightful queen and wife. However, she cannot fight the influence Anne Boleyn has on him.

As for the jackets, the first one still looks a little ill-fitted to me, and much like the lavender velvet jacket, it seems more like a dressing robe. The right one I hate without a doubt. It is garish. The only redeeming quality of it is the color. This dark crimson looks stunning on Katherine, and the high collar helps to bring out her cheek bones.

This next dress has some very wonderful qualities about it. 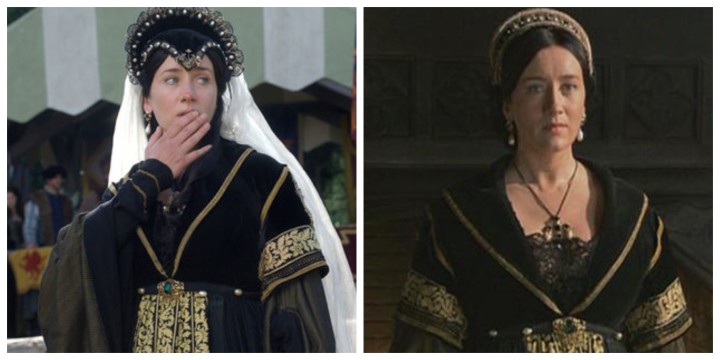 As always, Katherine is stunning in the gold and black dress combination. It is part of her signature look throughout her time in the series. For her story, it shows that she is older than Henry. Much older than she should have been, and as black is the conventional color of mourning, it also tells another side of her story. She may have loved Henry, but it could have also been a way of showing she never forgot her first husband, Henry's older brother, Arthur.

One of the things I love about this dress is the empire cut. It would have been a great way to hide or emphasize a pregnancy should Katherine have been or become pregnant. And the French hood worn during the joust is very period accurate, though with Katherine's hatred towards France, I do wonder how often should would have actually work such a style.

This greyish dress of Katherine's is one of my least favorites.

The only two things I appreciate about this gown are the pearls on the bodice and how she has a little more definition to her breasts with a modest cleavage where her pendant rests. Other than that, the color is horrid and washes Katherine out. It only shows her status as a queen and a monarch, which is why the two most defined times she wears this is during a portrait with Henry and when he is celebrating the birth of his illegitimate son. She holds herself strong, with grace and nobility, but the pride she has can also be foreshadowing of her own downfall.

Let us now talk about what Katherine wears to bed.

Katherine is very conservative in everything, including what she wears to bed. She spends each night before bed in prayer, wearing a simple white nightgown and a red robe. The robe is the only thing that shows her status as a royal here for its elaborate design and deep color. However, it is also the show of her defeat. In the end, Katherine knows that she has little to offer her husband at this point in her life and so all she feels she can do is be a good Christian and pray for her husband to return to her.

These three costumes are probably some of the most important costumes in all of Katherine of Aragon's wardrobe. It all starts with the black gown with the ruffles and the veil. This gown is when Katherine has been forced to leave her apartments and her home in Whitehall and forced to live the rest of her life as the dowager princess and in exile from the king. It is the start of her downfall, the ending of herself. The following two gowns shown are very ill-fitted and conservative to an excess. She has very little to show her regal and noble nature. She wears no jewels, very little color, and shows even less skin than before. Her clothing is poorly fitted, showing that she has little left to live for. She is weak and ill. She has one thing left, her faith.

The last outfit I wish to speak on for Katherine is her dress from Henry VIII's vision. She is dressed all in black, representing that she is dead, in mourning for herself, her daughter's future, and for Henry himself who is near death. She has returned to her stunning silhouette and traditional features of a Tudor style gown mixed with Spanish influence shown in the veil on her head. This is the final time we see Katherine, and it shows how far she has come, from being the most loved queen of British society to her death and finally her own kind of vengeance on Henry, the feelings of guilt.

Her clothing has told a great story of her life and desires. She loved her husband and dedicated her life to him. Even during her downfall and the loss of her position and title at court, she remained loyal to Henry and never gave up hope. Katherine is an inspiration to never give up hope and always be loyal, especially to her daughter, who she would have sacrificed everything for.