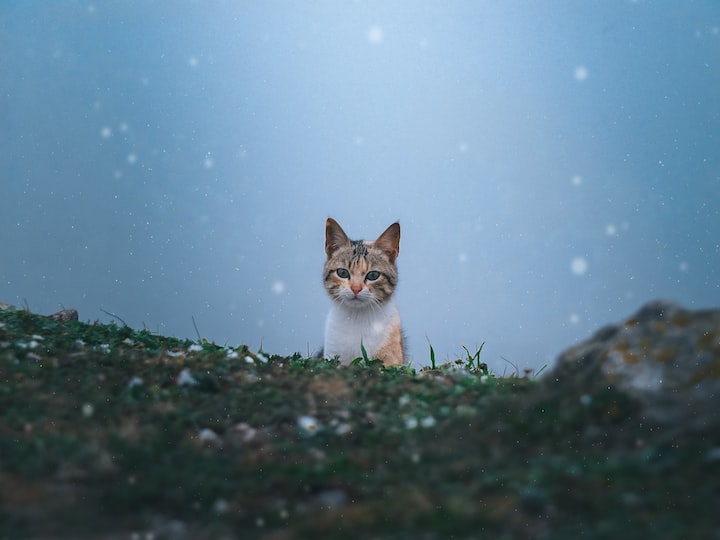 Photo by Malek Dridi on Unsplash

It all started with a cat. I caught a glimpse of her one day as she streaked by me in the garage. I had promised myself to never owe more than $10,000 of credit card debt, but there I was at $9,997, buying cat food at the corner store. I hit $10,011 the next day when I realized that she was pregnant. When I got to $10,061, I named her Christmas, because she came bearing gifts and had a fat belly. She had seven babies that summer, shortly after I hit $10,098. I did not name the kittens, except for the one that died. I found him in the morning when I went out to the garage to empty the trash. I buried Carrot in my neighbor’s geraniums while they were at work.

"The death of a kitten is a swift and terrible thing," I wrote later in my small, black notebook.

Someday, I would write a story out of all those fragments and pay off my debts. Until then, I paid the rent with a minimum wage job and charged things on my credit card, but never more than ten thousand dollars at a time, until Christmas came along. It cost me $301 to get her fixed and she thanked me for it by hissing and spitting when I let her out into my living room. I left the door open to the garage that night because I was afraid that if I did not, she would attack me.

Christmas was not much company, but at least she was another living thing, hiding somewhere in the shadows. I wondered if she would leave after I gave the kittens away, but she stayed. I sat in the garage on an old, left-behind lawn chair and talked to her about my money problems.

“We’re up to $11,541 in debt now. I can barely make the minimum payment.” I always thought people who talked to cats were crazy. "When I sell my first story, I'll buy you some fancy food, and maybe get your shots. You're going to love that."

I wrote in my black notebook. There was not much else to do, sitting there in that lawn chair. It was a coming of age saga, set in the future on a planet with blue trees.

"There's a contest, Christmas, and a prize." I could not see her but I knew she was there, listening, if only because she still hated me. "If I win, I'll buy you one of those carpeted posts. Cats like those."

I did not care that Christmas hated me. I hated myself some days too, sitting in that cold garage with nothing but a small, black notebook, a whole lot of debt, and not even a cat who loved me. I pulled the blanket closer around my legs.

Sometimes, she crouched on the frozen cement behind the shelves or between the owner’s plastic storage bins. I could feel her blood orange eyes always watching me. I did not like feeding her at night.

"Stop feeding her," my neighbors said, "and she'll go away."

Or starve in my garage, I thought, and I was not prepared for that. Her one sign of civilization was that she preferred to use the litter box rather than go outside. The last owners had left behind one of those too, just sitting in the garage, testament to some pet cat now long gone. I would have blamed her presence on them, but she came after I moved in, so I had no one to blame but myself and the raccoons who moved out and left their secret underhouse entrance to her.

I thought that if I sat out in the garage enough, maybe she would sit on my lap sometime, or at least let me see her.

I set an open can of tuna down by my feet, hoping the smell would draw her out. She stayed hidden, but I did find the empty can the next day. All that winter I wrote and wrote, but nothing sold and nothing won. My job cut my hours and I did not have enough money for rent anymore. I still bought cat food and litter. We got up to $14,998. That was it, the end of my credit limit. My cousins had offered to let me move in with them, but I could only take my clothes, the television, and a few books. Definitely not a wild cat.

I went into the garage to find some boxes. Would Christmas stay when the next owners moved in? Would they board up her hole and leave her outside until she eventually wandered away? Or worse, would they somehow leave her trapped inside to die? I folded up my lawn chair and added it to the garbage pile. For the first time, she came out and sat. Not close, but not as far either. She looked at me.

She meowed for the first time, wanting tuna probably, but I took it as a sign. I grabbed the lawn chair and set it up again.

"Do you think there’s more? How about a story about us?"

She had long since gone back to her hideaway, startled by the lawn chair. I knew that there was no us, but I wrote the story anyway.

“How about a travel story?” I tapped my pen against my small, black notebook. “Greece? Rome? Swaziland? Hey, I heard that Swaziland still has their own king. I admire that.”

Sure enough, I wrote a story in my small, black notebook about a person and a cat who travel to Swaziland to scuba dive, only now it is called Eswatini and there is no ocean there.

"The cat in the story goes scuba diving and loves to travel,” I said to Christmas, but she stayed hidden. "Maybe I'll buy you one of those cat backpacks if we win."

Spring came suddenly and we almost did not win, because I got the news by text. I thought it was a scam and deleted it. I was on the phone with my cousin when the contest people called me. I would not have answered that either, but I thought the unknown number was someone who might take Christmas in.

"$20,000, Christmas! We won $20,000! They loved the purple scuba-diving cat! I love the scuba-diving cat too!" I made so much noise in the garage, dancing with the lawn chair, that it took her two days to eat her celebration sardines.

When I left, I surprised us both by not leaving her behind. I managed to get her into a carrier with some help from a fancy can of tuna and a homemade trap. I loaded her into a beat-up motorhome that I had bought for $3000 from some guy on Facebook. The only decoration I put up was a picture of scuba cat drawn by the neighbor's kid, which I taped to the dash. I cut a hole in one end of the bench seat to make a cave for Christmas and her litter box. Maybe she was scared or just mad, but she pooped in her carrier before I could get her out. Maybe she just did it out of spite.

"You're going to like it there," I told Christmas as I opened the carrier door with gloves on and a scarf across my face in case she jumped at me with her claws.

She found her under-the-bench hideout right away. I had made sure that all the exits were closed, especially the windows. I knew that she would escape if she could. I put the carrier, poop and all, into a garbage bag to deal with later. I climbed into the front seat and started up the engine. If she hated me more than usual, I could not tell. I tucked my black notebook between the seats, a small wall in case Christmas changed her mind and decided to attack me after all. I figured, with a whole shelf of cat food for her and tuna for me, and $2,002 in my checking account, we could at least make it to Texas.