The Greyhound: The fastest couch potato

one of the oldest dog breeds in the world bred for speed. 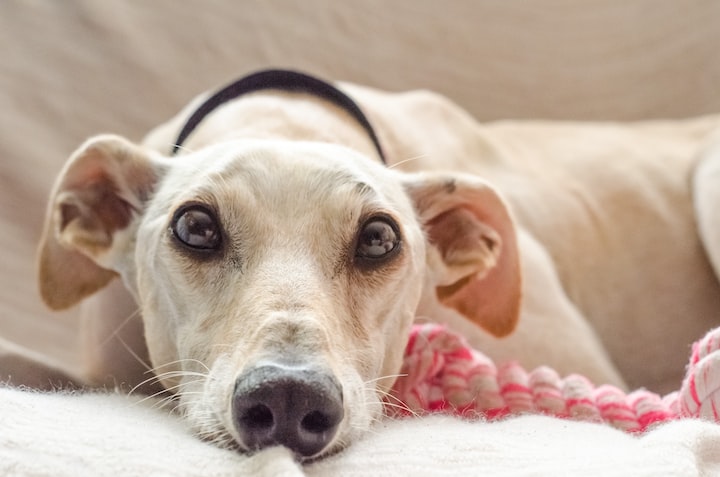 Photo by Juan Gomez on Unsplash

The Greyhound is a dog breed as old as time. They are in medieval paintings running after hares. George Washington owned one. They are often referred to as the fastest couch potato. A dog that has spurts of energy and a need for speed. Once the burst of energy has been depleted after running. (Racing, FastCAT, treadmill, etc.)

They'll sleep for a while. Then they get a burst of energy again and the cycle continues all day long.

Greyhounds love to run. They are part of a breed group called sighthounds. (It means they use their eyes to hunt and not their nose.)

Greyhounds are great dogs. They are friendly and enjoy meeting people (If properly socialized like any dog from a young age.) They can also run up to 45 miles an hour.

Greyhounds are one of the world's oldest dog breeds. They had ancestors dating back to 4,000 to 6,000 BC. According to A article on the Greyhound history by Jim Jeffers, It states that. "The Romans believed that greyhounds came from Gaul (western Europe), the land of the Celts. The Celts, on the other hand, believed that greyhounds came from Greece, and so called them "Greek hounds" (greyhound) may in fact be a derivation of Greek hound). This confusion suggests at least that greyhound-type dogs didn't originate in Gaul or Greece, but probably in the Middle East..."

Greyhounds were a huge part of history. They were rat hunters in the middle ages and soon they became invaluable.

Many hunters used them to hunt hares and other vermin. Greyhounds were great hunters of all sorts of animals. (Foxes, hares, etc.) George Washington the first President of the United States owned a pack of them for hunting, alongside other hunting dogs such as the American Foxhound.

Eventually, People started having races with their greyhounds which turned into the Greyhound racing industry.

Greyhound racing has now been around for a long time because of the history of Greyhounds being used as hunters or running races in history for entertainment. Nowadays, Animal rights organizations such as Grey2kUSA, The Humane Society of the United States, and People for the ethical treatment of animals. (PETA) Have accused Greyhound tracks of abuse and neglectful behavior. (such as bad diets, small crates, little to no potty breaks or socialization time, etc.) However, that is all false.

These dogs are all well cared for and given a life of love and proper care. They get tons of socialization with other dogs that live on the track. (Although they have to be muzzled for safety.)

They are given a proper healthy diet to be fit and healthy enough to race. When their racing career is over they are retired and are able to be adopted by the public.

Greyhounds aren't hard to take care of. Often times when they are ready for adoption. They have already been trained from a young age before their racing career.

(Although they do have a high prey drive for chasing after small things that move, So extra recall training, a long line leash and a muzzle are essential for play outside of a fenced-in area.)

A fenced-in yard is great but not required as there are lots of other options for exercising your greyhound like a sport such as FASTCAT.

An American Kennel club sport where a dog chases a lure. (Similar to racing and allows the Greyhound to still do what they love even though they are retired from racing. They still need some out of outlet for their energy. Running is their favorite thing to do so a sport like this is a great thing for them.

Greyhounds normally race until they are about 5-6 Years old. They might become breeding dogs at the track or be put up for adoption.

Some greyhounds get adopted and then become therapy dogs or service dogs because of their temperments and they are already trained. However they cannot be moblity dogs due to their body shape.

One organization that trains greyhounds as service dogs after they retire from racing is Greyt Hart Service Dogs in Woodford VA. They train psychatric service dogs for people with PTSD and other mental health conditions.

The dogs love their jobs and don't take as long to train because they already have basic or advanced obedience skills. Allowing them to get through training quicker then training a dog from a puppy to a adult.

If your looking to adopt a dog research the greyhound and see if it's right for you.

If you want to learn more about this cool dog breed. Go to

Hi, I'm Paige and I love to read and write. I love music and dogs. I mostly will write about my favorite things like dogs and music. I've been a writer for a few years now :)

More stories from Paige and writers in Petlife and other communities.