by Jennisea Redfield 6 days ago in fact or fiction 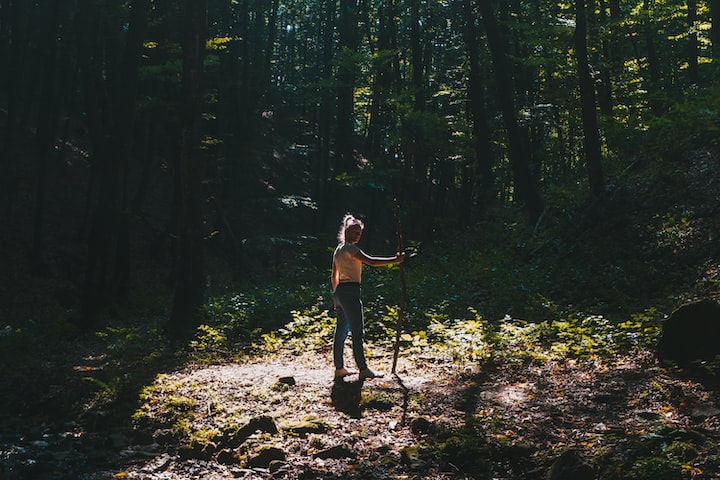 Photo by David Gabrić on Unsplash

It was the cusp of June. The air dry and cloggingly hot. Kiki, a short little black dog with one white toe on her front right paw and a splash of grey around her chest, darted in and out of the dusty green bushes that dotted along the old logging road. She was just a mutt that I rescued, who in favor rescued me. More than once, but I will never admit that to my family.

I walked calm and slow behind Kiki, a latch hook rifle hanging readily at my shoulder, barefoot and just two miles from where our family set up the weekly campsite. I was used to walking alone, and with no shoes. With just the sound of Kiki's scrambling after skimpy looking squirrels, the whimsical song of summer robins, and the sound of my feet carefully stepping over rocks, there was the wonderful sound of sweet peace. If I concentrate, I can hear the silky whispers of the nearby river, with water fresher and sweeter than anything I can find in a bottle or through a tap. There was the scent of a Montana summer in the air; a mixture of dried mud, pine sap, and wild cicely. My nose is a bit keener than other people, so I can even smell the sweet smell of pine wood burning in a carefully tended campfire.

But...I could smell something else: the oddly sweet and sticky scent of rotting meat. Kiki, a normally aloof and boneheaded dog, dashed to stand in front of me, her short black hairs hackled and raised as she snarled. She never snarled. She yipped, barked, and howled, but never made such a challenging sound. I took heed of her stance, and readied my rifle, keeping the muzzle pointed to the right and down, in case the thing she was snarling at was non-threatening.

The bushes and long grass of the woods popped and swished tauntingly as something just a bit bigger than my dog approached the road. I relaxed. If the thing setting off Kiki was no bigger than her, I don't need my rifle.

Tumbling out of the grass, almost just as aloof as Kiki, was a small bear cub. It was small, sure, probably no older than three months. The cub stopped and stared at us. With how young it looked, it must have never seen a human or a dog before. But I readied my rifle again. If here's the cub...

Where the hell was its mother?

I didn't need to wait long.

The bushes and grass snapped and popped and parted like a small bulldozer was running at us. Kiki was snarling even louder, trying to look more threatening than her whopping eight pounds perceived her. I began to slowly walk backward, keeping my gun and my line on sight on the not-so-hidden shape of the mother. She had no hump and lacked a scoop to her face, identifying her as a common Black bear. That didn't make her any less formidable.

"Kiki! Home." I ordered, keeping my voice calm and firm, but not loud. Kiki was still snarling, not moving an inch.

"Kiki! Home, now!" the damn dog, who I was mentally considering cooking for dinner later, still refused to move. I raised my rifle and pointed at the thick tree trunk only fifty feet away from us. I let off one round. The sonic crack was nothing like thunder, or like the exaggerated sounds from movies, but it was loud and noticeable, like a firecracker thrown into a late-night campfire. But the noise did what I wanted.

Kiki let out a yelp and began running back towards our camp, leaving with...the damn bear. Said bear was now on her hind legs, towering over me. I lowered my gun and still walked backwards, keeping my eyes on the sow and her cub. I kept walking backwards until I could no longer see her. Once out of view, I turned around and continued a steady, yet quicker pace, back towards my family.

Halfway down the mountain, I saw three of my brothers running up with guns as well...and Kiki. I let out a soft huff of a laugh as the damn dog bolted past my brothers and towards me.

Now was the hard part: explaining why I shot the damn gun.

I wasn't allowed to walk alone after that.

Read next: Dogs Are the Most Faithful and Consistent of All Our Companions