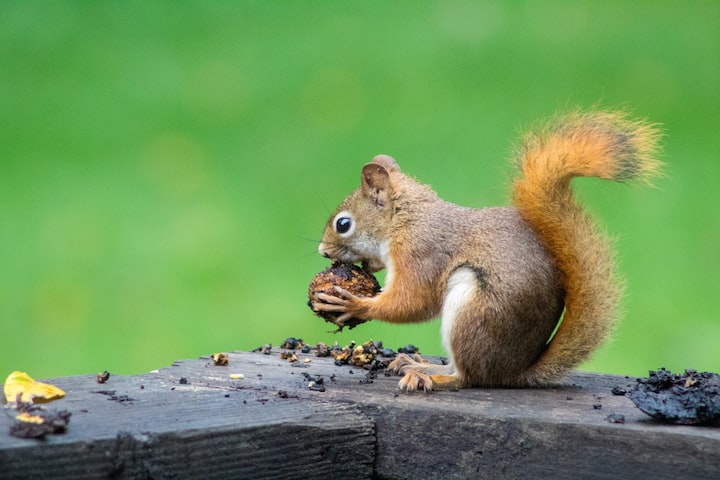 Photo by Caleb Martin on Unsplash

Grey squirrels is the most common of numerous squirrel species found in North America, and is more notorious for being unafraid of humans and being more comfortable among us, however the endangered subspecies, the red squirrel, is increasingly at risk of extinction due to the grey squirrels being much more aggressive on collecting food and nesting, also the red squirrel is commercially harvested for its fur.

It is feared that the grey squirrel could dominate the world of squirrels, but at least some research has shown that in overlapping squirrel populations where food and suitable nesting areas are in abundance, the grey squirrels are much more tolerant of other squirrels.

The squirrel virus is usually transmitted by grey squirrels without causing any symptoms, but it is typically fatal for red squirrels within two weeks of infection.

Red squirrels can live relatively long lives, providing they are not captured for fur or wiped out by a grey squirrel invasion, with the oldest known squirrel in the wild living to be at least 10 years old and domesticated red squirrel usually living for at least 8 years.

In the UK there are a few charities working to restore the natural red squirrel population, in Wales, there is the Anglesey Red Squirrel Project, which reintroduces red squirrels into the wild through a concerted control of grey squirrels, in hope they will find their own way and thrive on there own. The project is supported by the Welsh Department of Natural Resources, Welsh Wildlife Service and the Wales Wildlife Trust. In Scotland there is The Scottish Red Squirrel Rescue, it is a partnership project that works with local communities to protect red squirrels in areas where they are most at risk from grey squirrels.

Gliding squirrels are very common in many areas of the world, but many people have never seen them, the flying squirrel resembles the grey fox squirrel but they can glide in and out of trees, and it almost looks like they are flying. They build nests from leaves, twigs or bark and prefer woodpecker holes for nesting places but can nest anywhere. Flying squirrels generally hunt at night to avoid predators.

Scientists have difficulty collecting the data they need to determine the populations of a particular type of flying squirrel, especially as flying squirrels usually live in forests or woodlands that are difficult for humans to reach.

Flying squirrels are able to control their gliding path with their limbs and tails, they can also change direction very quickly. The flying squirrel gives very interesting insights into the formation of gliding flights and mechanisms, and could provide useful information for engineers of future flying machines.

Depending on the weather, a flying squirrel can glide from a height of 60 feet to a distance of 80 yards or more in less than 30 seconds, they can rotate and change the angle of descent very quickly. As a flying squirrel approaches its landing, it twists its tail and holds its body back to slow the glide, giving it enough time to position its feet to hold the trunk.